Spoken language is a special type of music. From a developmental perspective, we argue that music comes first and language arises from music. Infants listen first to sounds of language and only later to its meaning. As adults, people focus primarily on the meaning of speech. But babies begin by hearing language as an intentional and often repetitive vocal performance. The meaning of words comes later. Music cognition matures more slowly than language cognition and is more difficult. The paper explores many connections between listening to speech and music. For example, recognizing the sound of different consonants requires rapid processing in the temporal lobe of the brain. Similarly, recognizing the timbre of different instruments requires temporal processing at the same speed. From a musical perspective, speech is a concert of phonemes and syllables. We conclude that music merits a central place in our understanding of human development. – weihler

Study Of Songbirds Sheds Light On Brain Circuits And Learning. History Language Centers, Lateralization. The process of identifying the parts of the brain that are involved in language began in 1861, when Paul Broca, a French neurosurgeon, examined the brain of a recently deceased patient who had had an unusual disorder.

Verbal language is not the only way that two people communicate with each other. Even before they open their mouths, they are already communicating through various non-verbal mechanisms. First of all, their physical appearance, the way they dress, the way they carry themselves, and their general attitude all form a context that lends a particular coloration to their verbal messages. Next, the particular position of their bodies during conversation, the way their eyes move, the gestures they make, and the ways they mimic each other will also impart a certain emotional charge to what they say. There is also what is often called the music of language—the variations in tone, rhythm, and inflection that alter the meanings of words. When we are talking about language, it is therefore useful to distinguish between verbal language—the literal meaning of the words—and everything that surrounds these words and gives them a particular connotation. – weihler

Though he had been able to understand spoken language and did not have any motor impairments of the mouth or tongue that might have affected his ability to speak, he could neither speak a complete sentence nor express his thoughts in writing. 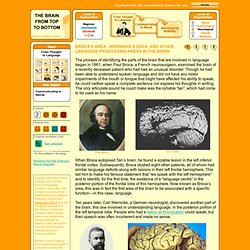 The only articulate sound he could make was the syllable “tan”, which had come to be used as his name. When Broca autopsied Tan’s brain, he found a sizable lesion in the left inferior frontal cortex. Dave's Auditory fMRI Scrapyard.

Surprising Broca. The Key to Creating a Message That Is Heard and Acted Upon Broca’s Area resides in the left hemisphere of your brain, just over the southeast corner of the Motor Association Cortex. 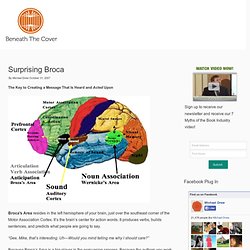 It’s the brain’s center for action words. It produces verbs, builds sentences, and predicts what people are going to say. “Gee, Mike, that’s interesting. Uh—Would you mind telling me why I should care?” Because Broca’s Area is a big player in the persuasion process. So let’s follow a verbal message through the brain, shall we?

When a message is heard, it enters the brain through the Auditory Cortex and then lands in Wernicke’s Area, which attaches meanings, images, and feelings to sounds and to individual words. Wernicke’s Area then passes the words along to Broca’s Area, which scans the words to see if they fit a pattern similar to others it has already stored away from the past. A morbid ending, to be sure. Questions about your marketing plan may be directed to Michael R. New Findings Announced. A century and a half ago, French physician Pierre Paul Broca found that patients with damage to part of the brain's frontal lobe were unable to speak more than a few words.

Later dubbed Broca's area, this region is believed to be critical for speech production and some aspects of language comprehension. However, in recent years neuroscientists have observed activity in Broca's area when people perform cognitive tasks that have nothing to do with language, such as solving math problems or holding information in working memory.

Those findings have stimulated debate over whether Broca's area is specific to language or plays a more general role in cognition. A new study from MIT may help resolve this longstanding question. The researchers, led by Nancy Kanwisher, the Walter A. Hörsinn, physikalische Grundlagen.