Time lapse map of every nuclear explosion ever on Earth 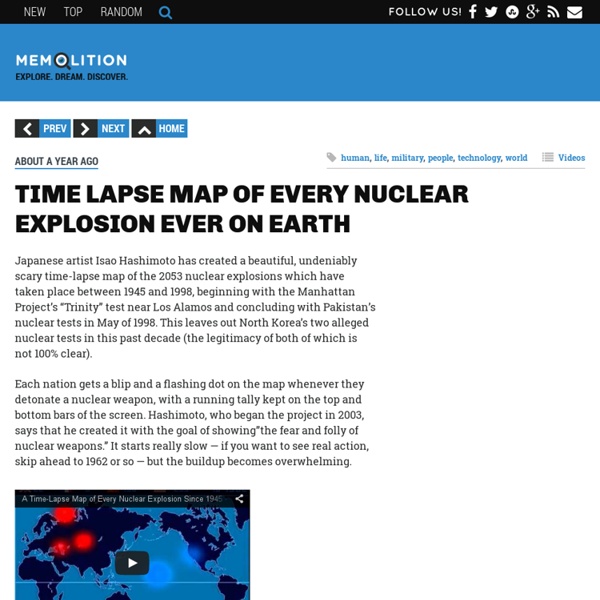 Japanese artist Isao Hashimoto has created a beautiful, undeniably scary time-lapse map of the 2053 nuclear explosions which have taken place between 1945 and 1998, beginning with the Manhattan Project’s “Trinity” test near Los Alamos and concluding with Pakistan’s nuclear tests in May of 1998. This leaves out North Korea’s two alleged nuclear tests in this past decade (the legitimacy of both of which is not 100% clear). Each nation gets a blip and a flashing dot on the map whenever they detonate a nuclear weapon, with a running tally kept on the top and bottom bars of the screen. Hashimoto, who began the project in 2003, says that he created it with the goal of showing”the fear and folly of nuclear weapons.” It starts really slow — if you want to see real action, skip ahead to 1962 or so — but the buildup becomes overwhelming.

40 maps that explain the Roman Empire by Timothy B. Lee on August 19, 2014 Two thousand years ago, on August 19, 14 AD, Caesar Augustus died. He was Rome's first emperor, having won a civil war more than 40 years earlier that transformed the dysfunctional Roman Republic into an empire. Under Augustus and his successors, the empire experienced 200 years of relative peace and prosperity. School of Americas World War II was the "good war". After that conflict, most Americans believed that US intentions in the world were noble -- the US was the punisher of aggression and a warrior for freedom. This image was for generations of Americans the measure by which they judged their country in world affairs. The war in Vietnam ended the illusion that America was always on the "right side". Today, America's image as a defender of democracy and justice has been further eroded by the School of the Americas (SOA), which trains Latin American and Caribbean military officers and soldiers to subvert democracy and kill hope in their own countries.

Top 10 Logical Fallacies in Politics The human brain is wired all wrong. Those not versed in logic are blissfully unaware of how much our brain messes up the most basic of arguments, leading to the mess of random thoughts, non-sequiturs, cognitive dissonance, white lies, misinformation, and syntax errors that we call consciousness. Luckily, there is one place where all of these logical misteps can be exemplified: politics. What follows is a crash course in some of the most prevelant fallacies we all make, as they appear in modern American politics. Fukushima: The Shocking Truth of What’s Really Happening I just came across this report on RT about the alarming Fukushima situation. How the company managing the catastrophe have consistently underestimated the nuclear contamination; how the pacific ocean is likely to be contaminated for eons to come and how the affect on physical health is increasingly disastrous. I am a spiritual person. I do not fear nor wish to propagate fear over what is happening.

J. Rainforest role in the water cycle « Rainforest Conservation Fund Freshwater is an essential resource which is under increasing pressure. Dams and other diversionary activities, particularly agriculture, have diverted a huge amount of the world’s fresh water for human use. Humans now use more than 50% of the available fresh water of the earth, and this proportion is en route to increase to 70% in the next half-century. Therefore it behooves us to attend to all factors which affect the water cycle. Although the role of rainforests in the global water cycle is relatively small compared to that of the oceans, it is nevertheless extremely important. Rainforests influence the hydrologic cycle in the following ways: Danger Room - What's Next in National Security Danger Room What's Next in National Security From Threat Level U.S. Says It Spied on 89,000 Targets Last Year, But the Number Is Deceptiveby Kim ZetterThe Office of the Director of Intelligence, upon order of the president, released its first national security transparency report on… More06.27.14

The Ugly History Behind ‘Religious Freedom’ Laws - Washington Spectator From Ava Duvernay’s award-winning film to President Barack Obama’s speech at the Edmund Pettus Bridge, to the thousands we crossed the bridge with and the millions that joined by television, America has remembered Selma, Alabama, this year. We have honored grassroots leaders who organized for years, acknowledged the sacrifices of civil-rights workers, and celebrated the great achievement of the Voting Rights Act. At the same time, we have recalled the hatred and fear of white supremacy in 1960s Alabama. But we may not have looked closely enough at this ugly history.

This Is What The World Would Look Like If Cell Phone Radiation Was Visible It shocks many people to discover that less than 1 percent of the electromagnetic spectrum is visible to the human eye. Think about that for a moment. Take the rainbow for example, the existence of the rainbow depends on the conical photoreceptors in your eyes; to animals without cones, the rainbow does not exist. If they can’t conceive the idea of one in their head, does it mean that rainbows don’t exist? Global risks: Pool knowledge to stem losses from disasters Turjoy Chowdhury/Nurphoto/Corbis This year's deadly earthquakes in Nepal killed more than 8,000 people and reduced thousands of buildings to rubble. In April and May, two massive earthquakes in Nepal killed more than 8,400 people, injured 20,000 and reduced 300,000 houses to rubble.

The dead trees and fallen leaves near Chernobyl aren’t decaying It’s been nearly 30 years since the catastrophe at Chernobyl, and as the cleanup grinds on, the far-reaching effects continue to be documented. Birds with smaller brains, increasing spiders, decreasing butterflies, all these and more have been reported from the areas surrounding Chernobyl. One group you don’t hear very much about are the decomposers -- those bugs, microbes, fungi, and slime molds who nourish themselves by consuming the remains of dead organisms. Without these recyclers, carbon, nitrogen, and other elements essential to life would be locked in plant corpses. The effects of radioactive contamination on the decay of plant material remains unknown… until now. Scientists examining the forests around Chernobyl have found that radioactive contamination has reduced the rate of litter mass loss.