Big telecom and Big utilities have a joint venture of convincing the world that low-level chronic microwave radiation exposure is safe – even when thousands of independent peer-reviewed studies say it is not.

is a Ubiquitous Universal Genotoxic Carcinogen, that causes elevation of the rates of a wide range of cancer, cardiac, reproductive and neurological diseases and death in human populations.

Dr Neil Cherry, 11th November 2000: 'A New Paradigm, the physical, biological and health effects of Radio-frequency / Microwave Radiation' 5G: Swiss Telcos Ignore Official Laws and Launch 5G; Rule Of Law Under Attack. With so many dominoes starting to fall where people don't want 5G, one had to expect the foundational Rule of Law would be tested. 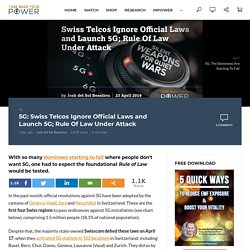 In the past month, official resolutions against 5G have been adopted by the cantons of Geneva, Vaud, Jura and Neuchâtel in Switzerland. These are the first four Swiss regions to pass ordinances against 5G installation (see chart below), comprising 1.5 million people (18.1% of national population). Despite that, the majority state-owned Swisscom defied these laws on April 17, when they activated 5G stations in 102 locations in Switzerland, including Basel, Bern, Chur, Davos, Geneva, Lausanne (Vaud) and Zurich. They did so by upgrading existing antennas installed for previous generations of wireless technology. As reported by TheLocal.ch: Switzerland’s Growing Opposition to 5G. 5G Network Uses Same EMF Waves as Pentagon Crowd Control System. The corporate-military-industrial complex is in the process of deploying — upon all civilians — millimeter-wave technology linked to weapons programs. 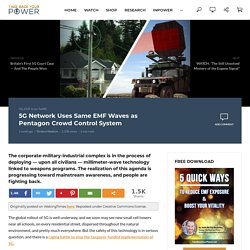 The realization of this agenda is progressing toward mainstream awareness, and people are fighting back. Originally posted on WakingTimes here. Reposted under Creative Commons license. Pollution Caused by Wireless Wi-Fi Radiation is Topic of “Wireless Silent Spring” By B.N. 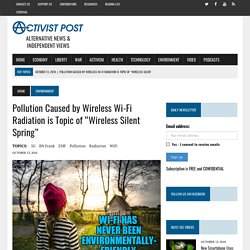 Frank Rachel Carson’s book, Silent Spring was written about environmental harm being caused by pesticides. It is credited as helping to jump-start the environmental movement: Inconvenient truth - the John Patterson story. What inconvenient truth led a highly-regarded radiation expert to take the law into his own hands and demolish six mobile phone stations? 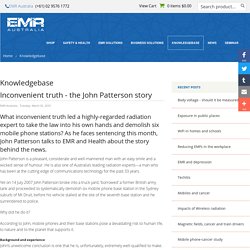 As he faces sentencing this month, John Patterson talks to EMR and Health about the story behind the news. Artemis - pCell: Mass Sterilization. They're About to Unleash Their Final Phase! 5G Frequency Armageddon For Body And Mind The David Icke Dot Connector Videocast. Scientist 5G appeal 2017. NAVY MEDICAL RESEARCH INSTITUTE - BIBLIOGRAPHY OF REPORTED BIOLOGICAL PHENOMENA ('EFFECTS') AND CLINICAL MANIFESTATIONS ATTRIBUTED TO MICROWAVE AND RADIO-FREQUENCY RADIATION. 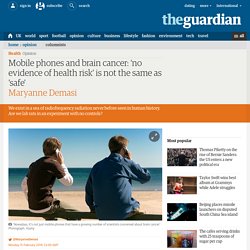 This has been an ongoing debate for decades, but whenever someone asks this question, it’s usually met with scepticism and the debate is shunned. I used to react the same way. But once I started digging into the evidence, it became clear to me that the answer was much more complex than I had imagined. There are over 6 billion mobile phone subscriptions worldwide, many of them smart phones, with Wi-Fi functionality. Since the widespread use of mobile phones, overall brain cancer rates have not increased and this is often used as proof that mobile phones are safe.

Nowadays, it’s not just mobile phones that have a growing number of scientists concerned. We now exist in a sea of radiofrequency (RF) radiation, never before seen in human history. In 2011, the International Agency for Research on Cancer (IARC) classified RF electromagnetic fields as a “possible human carcinogen”. Dr Davis is highly credentialed.

Case in point. TSA backscatter radiation safety tests were rigged - NaturalNews.com. (NaturalNews) It can now be revealed by NaturalNews that the TSA faked its safety data on its X-ray airport scanners in order to deceive the public about the safety of such devices. 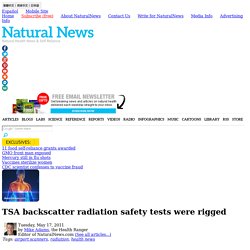 As evidenced by recent events in Washington, we now live in an age where the federal government simply fakes whatever documents, news or evidence it wants people to believe, then releases that information as if it were fact. This is the modus operandi of the Department of Homeland Security, which must fabricate false terror alerts to keep itself in business -- and now the TSA division has taken the fabrication of false evidence to a whole new level with its naked body scanners (see below). Electromagnetic Energy Pollution. Dylan Charles, ContributorActivist Post As revealed in the study of quantum physics, the world around us is comprised of energy. 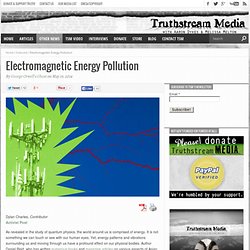 It is not something we can touch or see with our human eyes. Yet, energy patterns and vibrations surrounding us and moving through us have a profound effect on our physical bodies. Author Daniel Reid, who has written numerous books and magazine articles on various aspects of Asian self-health and self-healing practices, offers an interesting perspective in his article Electro-magnetic Energy Pollution, which discusses the effects that electromagnetic energy pollution has on our energetic and physical bodies: What is Electromagnetic Radiation (EMR)? - Stop OC Smart Meters. 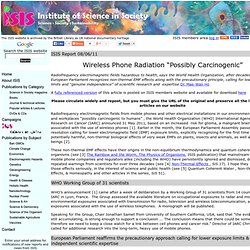 Mae-Wan Ho A fully referenced version of this article is posted on ISIS members website and available for download here Please circulate widely and repost, but you must give the URL of the original and preserve all the links back to articles on our website Radiofrequency electromagnetic fields from mobile phones and other electrical installations in our environment, homes, and workplaces “possibly carcinogenic to humans” , the World Health Organization (WHO) International Agency for Research on Cancer (IARC) announced 31 May 2011, based on an increased risk for glioma, a malignant brain cancer associated with the use of wireless phones [1].

[There is] much published science to show that across the electromagnetic spectrum the ELF fields and RF/MW radiation damage the cellular DNA, alter cellular calcium ions, reduce melatonin, and altar many cellular functions. Radiofrequency and Microwaves, including cell phone radiation, are genotoxic shown by many independent studies published since the first in 1959. Therefore they are carcinogenic. Microwaves also open the Blood Brain Barrier, letting natural and external brain damaging chemicals into the brain and CNS. Dr Neil Cherry discovered that epidemiological studies of exposed workers and the residents confirm, through classical public health assessment, that electromagnetic fields and radiation are a Ubiquitous Universal Genotoxic Carcinogen, causing increased rates of Cancer, Cardiac, Reproductive and Neurological health effects in exposed human populations, with a safe level of zero exposure. – senseih

Epidemiology is fundamental science and the strongest evidence for the assessment of human health effects of disease agents. 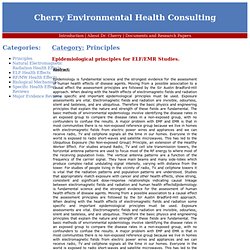 Moving from a possible association to a causal effect the assessment principles are followed by the Sir Austin Bradford-Hill approach. When dealing with the health effects of electromagnetic fields and radiation some specific and important epidemiological principles must be used. Exposure assessments are vital. Size: 57 pages, 1150 KB. Physical, biological and health effects of Radiofrequency / Microwave Radiation. Skin cancer caused by TV and radio antenna masts. Skin Cancer FM In the 1950s many countries began to see a dramatic increase in the skin cancer melanoma. 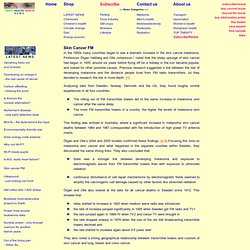 Professors Örgan Hallberg and Olle Johansson,* noted that the sharp upsurge of skin cancer had begun in 1955, around six years before flying off for a holiday in the sun became popular, and looked for other possible causes. Previous research suggested a link between the risk of developing melanoma and the distance people lived from FM radio transmitters, so they decided to research the link in more depth. [1] Analysing data from Sweden, Norway, Denmark and the US, they found roughly similar experiences in all four countries: Health issues associated with EMFs. A leading Fortune 500 insurance firm has warned the industry that “unforeseen consequences of electromagnetic fields” could lead to a raft of claims and significant liability losses. In its SONAR Emerging Risks report, 2013, which covers risks that could “impact the insurance industry in the future”, the Emerging Risks team at Swiss Re categorises the impact of health claims related to electromagnetic fields (EMFs) as “high”.

It acknowledges recent reports of courts ruling in favour of claimants who have experienced health damage from mobile phones, and also says that anxiety over risks related to EMFs is “on the rise”. The document states that whilst the majority of the topics covered in its pages were of “medium impact”, health issues associated with EMFs sit in the highest impact category. US Department of Interior Attacks FCC's Exposure Standards: "Out of Date and Inapplicable" Birds have “nest and site abandonment, plumage deterioration, locomotion problems, reduced survivorship, and death” The Director of the Office of Environmental Policy and Compliance of the United States Department of the Interior sent a letter to the National Telecommunications and Information Administration in the Department of Commerce that addresses the Interior Department’s concern that cell tower radiation has had negative impacts on the health of migratory birds and other wildlife.

The Interior Department accused the Federal government of employing outdated radiation standards set by the Federal Communications Commission (FCC), a Federal agency with no expertise in health. SONAR_+Emerging_risk_insights_from_Swiss_Re.

Unforeseen consequences of electromagnetic fields [page 11] The ubiquity of electromagnetic fields (EMF) raises concerns about potential implications for human health, in particular with regard to the use of mobile phones, power lines or antennas for broadcasting. Over the last decade, the spread of wireless devices has accelerated enormously. The convergence of mobile phones with computer technology has led to the proliferation of new and emerging technologies. This development has increased exposure to electromagnetic fields, the health impacts of which remain unknown. Anxiety over the potential risks related to EMF has risen. Studies are difficult to conduct, since time trend studies are inconsistent due to the still rather recent proliferation of wireless technology. The WHO has classified extremely low-frequency magnetic fields and radiofrequency electromagnetic fields, such as radition emitted by cell phones, as potentially carcinogenic to humans (Class 2B carcinogen). Furthermore, a recent ruling by an Italian court suggested a link between mobile phone radiation and human health impairment. Overall, however, scientific studies are still inconclusive regarding possible adverse health effects of EMF. If a direct link between EMF and human health problems were established, it would open doors for new claims and could ultimately lead to large losses under product liability covers. Liability rates would likely rise. – senseih