The European Copyright Directive: What Is It, and Why Has It Drawn More Controversy Than Any Other Directive In EU History? During the week of March 25, the European Parliament will hold the final vote on the Copyright Directive, the first update to EU copyright rules since 2001; normally this would be a technical affair watched only by a handful of copyright wonks and industry figures, but the Directive has become the most controversial issue in EU history, literally, with the petition opposing it attracting more signatures than any other petition in change.org’s history. 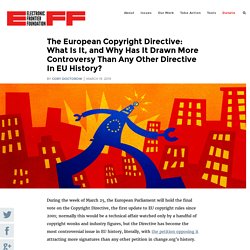 How did we get here? European regulations are marathon affairs, and the Copyright Directive is no exception: it had been debated and refined for years, and as of spring 2017, it was looking like all the major points of disagreement had been resolved. Then all hell broke loose. Why can no one agree on what the Directive actually means? "Directives" are rules made by the European Parliament, but they aren't binding law—not directly. Take Action Stop Article 13. The EU Just Destroyed The Internet #Article11 #Article13. LOOK WHAT WAS HAPPENING WHILE AMERICA WAS DISTRACTED WITH THE KAVANAUGH HEARINGS! The Game is Rigged: Congress Invites No Consumer Privacy Advocates to its Consumer Privacy Hearing. Big Brother Wants to Stop Your Private Online Conversations.

The Internet Is Being Taken Hostage. America to hand off Internet in under two months. CCIA-Explanation-of-GS-Media-Case-on-Hyperlinking. EU’s Highest Court to Weigh Whether Hyperlinking Will Remain Legal in Europe. Tomorrow, the Court of Justice of the EU (CJEU) in Luxembourg will hear arguments in a case about one of the most fundamental online activities: hyperlinking. 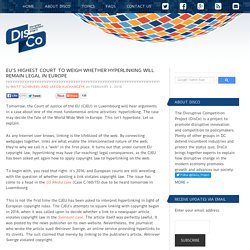 The case may decide the fate of the World Wide Web in Europe. This isn’t hyperbole. Let us explain. As any Internet user knows, linking is the lifeblood of the web. By connecting webpages together, links are what enable the interconnected nature of the web; they’re why we call it a “web” in the first place. To begin with, you read that right: it’s 2016, and European courts are still wrestling with the question of whether posting a link violates copyright law.

Congress Stands Up to FCC Power Grab With Bill. Bill important because it reasserts power of Congress over unelected bureaucracy Kit Daniels Prison Planet.com March 6, 2015 House Representative Marsha Blackburn (R-Tenn.) has introduced a bill to block the FCC from imposing its 332-page “Net Neutrality” Internet takeover plan, which has still not been released to the public over a week after its adoption. 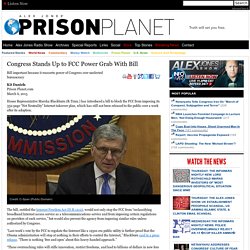 Credit: C-Span (Public Domain) The bill, entitled the Internet Freedom Act (H.R.1212), would not only stop the FCC from “reclassifying broadband Internet access service as a telecommunications service and from imposing certain regulations on providers of such service,” but would also prevent the agency from imposing similar rules unless authorized by Congress. “Last week’s vote by the FCC to regulate the Internet like a 1930s era public utility is further proof that the Obama administration will stop at nothing in their efforts to control the Internet,” Blackburn said in a press release.

A d v e r t i s e m e n t Print this page. Mr. UN, Islamists & Communists Push Global Internet Regime. The United Nations and some of its most oppressive member states are clamoring for global regulation of the Internet, including possible censorship. 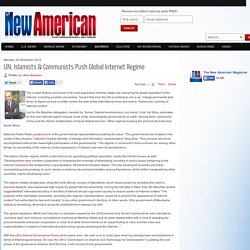 Toward that end, the UN is working to set up an “intergovernmental task force” to figure out how to better control the web at the international level and how to “harmonize” policing of Internet content. Led by the Brazilian delegation, headed by “former” Marxist revolutionary Luiz Inacio “Lula” da Silva, advocates for the new Internet regime include some of the most despotic governments on earth. Among them: communist China and the Islamic dictatorships of Saudi Arabia and Iran. Other regimes backing the plot include India and South Africa. National Public Radio quoted some of the governmental representatives pushing the issue. The Islamic Iranian regime, which is also famous for squashing political opposition, backs the UN-led moves as well.

There have been some minor protests from certain governments and industry groups. UN Grabs for the Internet: CFR, Chatham House Lead Toward “Global Governance” In a recent essay entitled, “The Strategic Significance of the Internet Commons,” former Secretary of Homeland Security Michael Chertoff describes cyberspace and the Internet as a “global commons” that must come under “global governance.”

This is the latest salvo in an ongoing campaign by a disparate congeries of internationalists, socialists, communists, and jihadists to turn over control of the Internet to some sort of regime under the United Nations. Unbeknownst to most Americans, the effort to transfer that control to the UN — including Internet taxing, censoring, and surveillance powers — is already far advanced. As The New American reported in March of this year, the Obama administration has already begun the phased transfer of Internet control to a nebulous and uncertain governance structure that has been set up as an innocent-appearing transition platform that, ultimately, is set for transfer to UN control.

United States to Give Up Its Control of the Internet. Last Friday the Department of Commerce announced that in October 2015 it will relinquish all remaining control over the “root” of the Internet to an obscure but vital private non-profit organization. 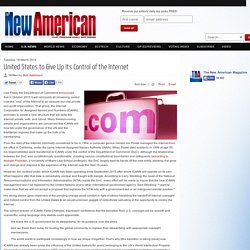 That group, the Internet Corporation for Assigned Names and Numbers (ICANN), promises to create a new structure that will keep the Internet private, safe, and robust.