Remove Radioactive Particles from Your Body in 5-7 Hours. By Gavin Bragg Guest Writer for Wake Up World Fukushima may soon become the greatest environmental disaster site the world has ever seen. 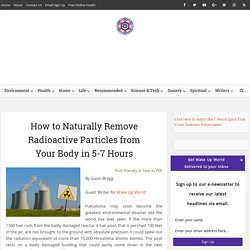 If the more than 1300 fuel rods from the badly damaged reactor 4 fuel pool, that is perched 100 feet in the air, are not brought to the ground with absolute precision it could spew out the radiation equivalent of more than 15,000 Hiroshima atomic bombs. The pool rests on a badly damaged building that could easily come down in the next earthquake, if not on its own.[1] Spent fuel must be kept under water because each rod is coated with zirconium alloy, which will spontaneously ignite if exposed to air. “According to Arnie Gundersen, a nuclear engineer with forty years in an industry for which he once manufactured fuel rods, the ones in the Unit 4 core are bent, damaged and embrittled to the point of crumbling.

What can we learn from Kerala? Guest Post by Geoff Russell. 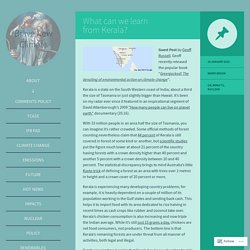 Geoff recently released the popular book “Greenjacked! The derailing of environmental action on climate change“. Kerala is a state on the South Western coast of India; about a third the size of Tasmania or just slightly bigger than Hawaii. Could Melanin Convert Radiation Into Harmless, Even Useful Energy? October 10th, 2016 By Sayer Ji Contributing writer for Wake Up World Could the melanin found in our bodies (the pigments that give human skin, hair and eyes their color) and in foods like mushrooms, help to mitigate the increasingly dire quantities of radiation we are exposed to daily? 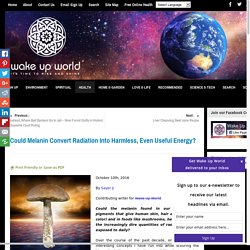 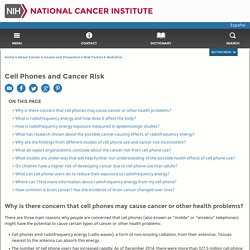 By Catherine J Frompovich | Activist Post What do cell phones, cell towers, Wi-Fi, Smart Meters and other “smart” devices all have in common? 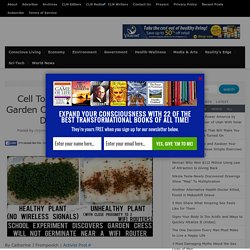 They emit radiation, which no one wants to take seriously as having adverse health effects on humans. Medically, the adverse effects are called “Non-thermal health effects.” In 2013, a ninth grade experiment for a national science fair found remarkable proof of radiation damage from Wi-Fi routers that was replicated by a peer review study. Wow! Five Danish schoolgirls proved what apparently no one in the microwave industry wanted to. Photo Source: Stop Smart Meters UK. EMFscientist.org - Home. Radioprotective Chelator: Apple Pectin Reduces Caesium-137 by 62% Reverse Radiation Damage with 5 Grams/Day of this Deep Sea Medicine. By Elizabeth Renter | Natural SocietyDecember 13th, 2013 Thought to be one of the oldest life forms on earth, spirulina is an algae loaded with health benefits. 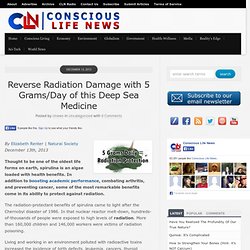 In addition to boosting academic performance, combating arthritis, and preventing cancer, some of the most remarkable benefits come in its ability to protect against radiation. This Inexpensive Omega-3 Source Can Protect Against Radiation. Paul Fassa | Naturalsociety | Nov 13th 2013 A study published in a recent issue of BioMed Central Cancer and conducted by the Pearlman School of Medicine at the University of Pennsylvania has once again revealed the radiation protective properties of flax seeds. 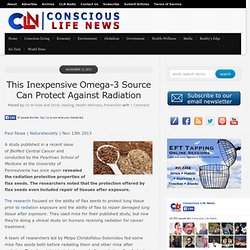 The researchers noted that the protection offered by flax seeds even included repair of tissues after exposure. The research focused on the ability of flax seeds to protect lung tissue prior to radiation exposure and the ability of flax to repair damaged lung tissue after exposure. They used mice for their published study, but now they’re doing a clinical study on humans receiving radiation for cancer treatment. What You Should Be Doing NOW to Protect Yourself from Radiation. Easy, Inexpensive Ways to Help Protect Your Family from Radiation It is well-known that potassium iodide works to protect against damage from radioactive iodine by saturating our body (the thyroid gland, specifically) with harmless iodine, so that our bodies are unable to absorb radioactive iodine from nuclear accidents. 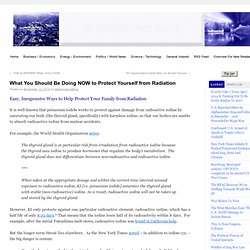 For example, the World Health Organization notes: The thyroid gland is at particular risk from irradiation from radioactive iodine because the thyroid uses iodine to produce hormones that regulate the body’s metabolism. The thyroid gland does not differentiate between non-radioactive and radioactive iodine. ***When taken at the appropriate dosage and within the correct time interval around exposure to radioactive iodine, KI [i.e. potassium iodide] saturates the thyroid gland with stable (non-radioactive) iodine. But the longer-term threat lies elsewhere. Cesium-137 is light enough to be carried by the wind a substantial distance. Compound in Broccoli Offers Significant Protection Against Radiation Sickness. Elizabeth Renter |Naturalsociety | Oct 30th 2013 Cruciferous vegetables like broccoli, cabbage, and cauliflower have a wealth of health benefits. 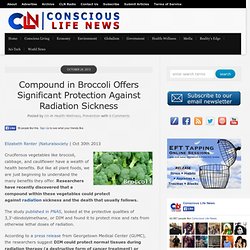 But like all plant foods, we are just beginning to understand the many benefits they offer. Researchers have recently discovered that a compound within these vegetables could protect against radiation sickness and the death that usually follows.