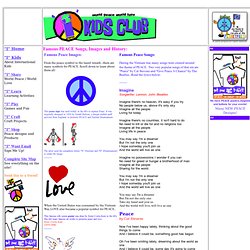 Scroll down to learn about them all: This peace sign was used widely in the 60's to express Peace. It was originally designed in 1958 by Gerald Holtom, a design student andf activitst from England, to promote PEACE and Nuclear Disarmament. The artist used the semaphore letters "N" (Nuclear) and "D" (Disarmament) to create the image When the United States was consumed by the Vietnam War, LOVE also became a popular symbol for PEACE..

This famous silk screen poster was done by Sister Corita Kent in the 60's. Peace Symbol - The History of the Peace Symbol. Peace Symbol Created (1958): In 1958, British artist Gerald Holtom drew a circle with three lines inside, intending the design to be a symbol for the Direct Action Committee Against Nuclear War (DAC). 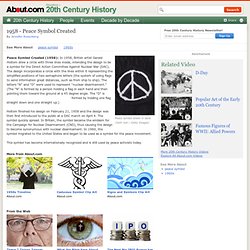 The design incorporates a circle with the lines within it representing the simplified positions of two semaphore letters (the system of using flags to send information great distances, such as from ship to ship). The letters "N" and "D" were used to represent "nuclear disarmament. " (The "N" is formed by a person holding a flag in each hand and then pointing them toward the ground at a 45 degree angle. The "D" is formed by holding one flag straight down and one straight up.) Holtom finished his design on February 21, 1958 and the design was then first introduced to the public at a DAC march on April 4. This symbol has become internationally recognized and is still used by peace activists today. 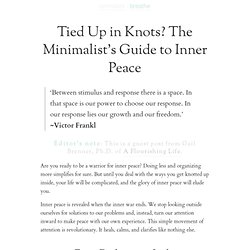 In that space is our power to choose our response. In our response lies our growth and our freedom.’ ~Victor Frankl Editor’s note: This is a guest post from Gail Brenner, Ph.D. of A Flourishing Life. Are you ready to be a warrior for inner peace? Inner peace is revealed when the inner war ends. From Darkness to Light We are experts at denying our experience. These hidden aspects of ourselves thrive when we ignore them, leaving fear, desire, and lack to unconsciously drive our behavior. Unearthing our inner experiences is like treasure hunting. The How-To Exploring your triggers takes courage and openness.

To be honest To feel pain but not wallow in it To let go of the old and change To contemplate a new kind of inner life not beset by distress and disturbance To be happy and peaceful Now, begin to explore. When you are triggered, rather than playing it out in the usual way, stop and breathe. Example #1: Holding a Grudge. Buddhism and Peace. Buddhism and Peace - Jan Willis Faith in Peace Seminar G6B People's Summit - Calgary, Alberta, Canada www.g6bpeoplessummit.org My thanks to Ms. 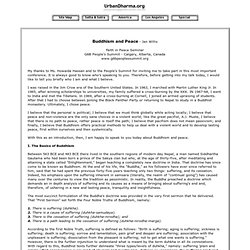 Howaida Hassan and to the People's Summit for inviting me to take part in this most important conference. It is always good to know who's speaking to you. Therefore, before getting into my talk today, I would like to tell you briefly who I am and what I believe. I was raised in the Jim Crow era of the Southern United States. I believe that the personal is political; I believe that we must think globally while acting locally; I believe that peace and non-violence are the only sane choices in a violent world; like the great pacifist, A.J. With this as an introduction, then, I am happy to speak to you today about Buddhism and peace. I. The most succinct formulation of the Buddha's doctrine was provided in the very first sermon that he delivered. 1.

Right Now. Www.PeaceButtons.info -The Little Button With A Big Message. May peace prevail on earth - Prayers of peace. "When the Eagle of the North gets together with the Condor of the South, it is time for all the Rainbow Tribes of the World to get together and bring Peace upon this world. 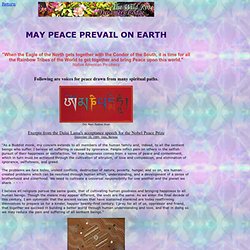 " Native American Prophecy Following are voices for peace drawn from many spiritual paths. Om Mani Padme Hum Exerpts from the Dalai Lama's acceptance speech for the Nobel Peace Prize December 10, 1989, Oslo, Norway "As a Buddist monk, my concern extends to all members of the human family and, indeed, to all the sentient beings who suffer. The problems we face today, violent conflicts, destruction of nature, poverty, hunger, and so on, are human created problems which can be resolved through human effort, understanding, and a development of a sense of brotherhood and sisterhood.

I believe all religions pursue the same goals, that of cultivating human goodness and bringing happiness to all human beings. "We're all one family, all together, We human beings, all one big mob! " A Prayer of Saint Francis.