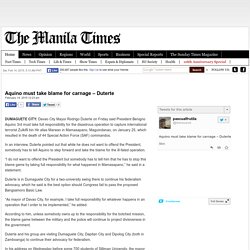 In an interview, Duterte pointed out that while he does not want to offend the President, somebody has to tell Aquino to step forward and take the blame for the ill-fated operation. “I do not want to offend the President but somebody has to tell him that he has to stop this blame game by taking full responsibility for what happened in Mamasapano,” he said in a statement. 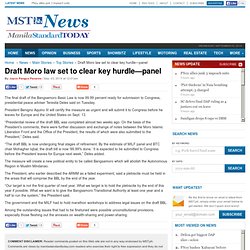 President Benigno Aquino III will certify the measure as urgent and will submit it to Congress before he leaves for Europe and the United States on Sept. 13. “Presidential review of the draft BBL was completed almost two weeks ago. 4 killed, 6 wounded in Lanao del Norte ambush. ByRichel UmelInquirer Mindanao ILIGAN CITY, Philippines—Four persons were killed while six others, including the mayor of Nunungan, Lanao del Norte, were wounded after being ambushed by unidentified armed men Thursday evening. 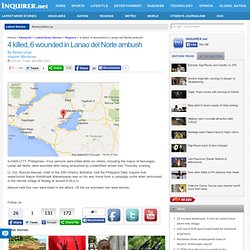 Lt. Col. Romulo Manuel, chief of the 35th Infantry Battalion, told the Philippine Daily Inquirer that reelectionist Mayor Abdulmalik Manamparan was on his way home from a campaign sortie when ambushed in the remote village of Malaig at around 6:30 p.m. Manuel said four men were killed in the attack. Follow Us Recent Stories: Complete stories on our Digital Edition newsstand for tablets, netbooks and mobile phones; 14-issue free trial. Philippines sends troops to protect candidates. MANILA - The Philippines deployed hundreds of extra troops as it vowed Wednesday to protect candidates for next month's mid-term elections after communist guerillas ramped up armed attacks.

The New People's Army (NPA) was attacking "soft targets", including politicians, to blackmail them into paying for "permits" to campaign without guerrilla interference, said President Benigno Aquino's spokesman Edwin Lacierda. "You want to challenge us? What Went Before: The proposed MOA-AD. Infographic by Albert G. Rodriguez On July 16, 2008, representatives of the government and the separatist Moro Islamic Liberation Front (MILF) announced that they had reached an agreement to expand the autonomous Muslim region in Mindanao. Under the proposed memorandum of agreement on ancestral domain (MOA-AD), the planned homeland also referred to as the Bangsamoro Juridical Entity (BJE) was to include the Autonomous Region in Muslim Mindanao (Sulu, Maguindanao, Lanao del Sur, Tawi-Tawi, Basilan and Marawi City); six municipalities in Lanao del Norte; hundreds of villages in the provinces of Sultan Kudarat, Lanao del Norte and North Cotabato, which voted in 2001 to become part of the ARMM; and parts of Palawan.

It was to have its own “basic law,” police and internal security force, and system of banking and finance, civil service, education and legislative and electoral institutions, as well as full authority to develop and dispose of minerals and other natural resources. TRO issued. Malaysian premier arrives in Manila ahead of Monday’s signing of framework agreement. INQUIRER.net Malaysian Prime Minister Najib Razak arrives at Villamor Air Base at suburban Pasay city, south of Manila, Sunday, Oct. 14, 2012. 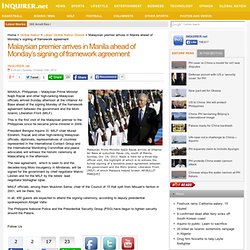 MANILA, Philippines—There is no need to nullify the action of then President Gloria Macapagal-Arroyo in declaring a State of Emergency in three provinces in Mindanao, a day after the massacre of 57 men and women including members of the media, the Supreme Court said. 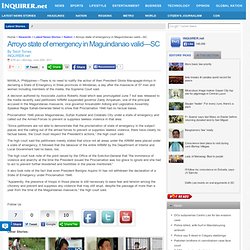 A decision authored by Associate Justice Roberto Abad which was promulgated June 7 but was released to the media recently said petitioners ARMM suspended governor Zaldy Ampatuan, one of the principal accused in the Maguindanao massacre, vice governor Ansaruddin Adiong and Legislative Assembly Speaker Regie Sahali-Generale failed to show that Proclamation 1946 had no factual bases.

Proclamation 1946 places Maguindanao, Sultan Kudarat and Cotabato City under a state of emergency and called out the Armed Forces to prevent or suppress lawless violence in that area. 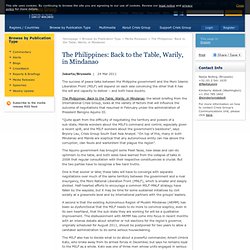 The Philippines: A New Strategy for Peace in Mindanao? The Philippine government is experimenting with a creative but risky new strategy to resolve the conflict in Mindanao. 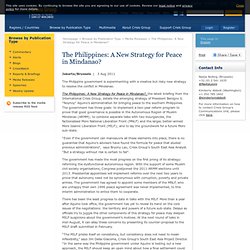 The Philippines: A New Strategy for Peace in Mindanao?