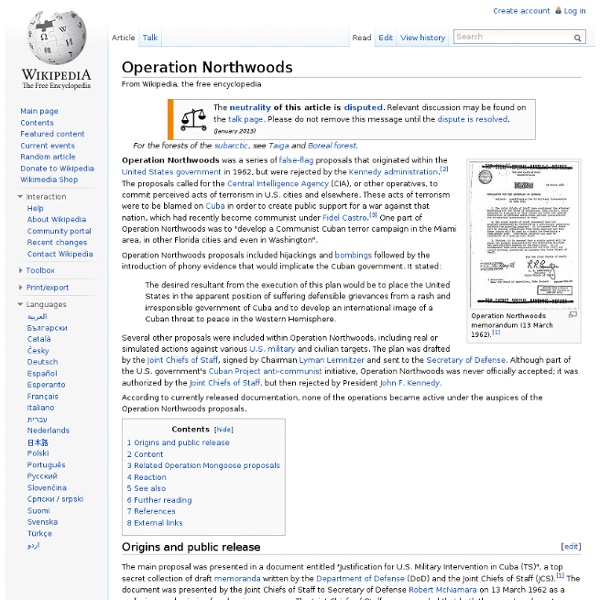 Operation Northwoods memorandum (13 March 1962)[1] Operation Northwoods was a series of false flag proposals that originated within the Department of Defense (DoD) and the Joint Chiefs of Staff (JCS) of the United States government in 1962. The proposals, which called for the Central Intelligence Agency (CIA), or other operatives, to commit acts of terrorism in US cities and elsewhere, were rejected by the Kennedy administration.[2] At the time of the proposal, Cuba had recently become communist under Fidel Castro. The operation proposed creating public support for a war against Cuba by blaming it for terrorist acts.[3] To this end, Operation Northwoods proposals recommended hijackings and bombings followed by the introduction of phony evidence that would implicate the Cuban government. It stated: Several other proposals were included within Operation Northwoods, including real or simulated actions against various US military and civilian targets. Origins and public release[edit] The U.S.

Stargate Project The Stargate Project[1] was the umbrella code name of one of several sub-projects established by the U.S. Federal Government to investigate claims of psychic phenomena with potential military and domestic applications, particularly "remote viewing": the purported ability to psychically "see" events, sites, or information from a great distance.[2] These projects were active from the 1970s through 1995 and were primarily handled by the CIA and DIA. They followed up early psychic research done at the Stanford Research Institute (SRI), Science Applications International Corporation (SAIC), The American Society for Psychical Research, and other psychical research labs.[3] The Stargate Project was terminated in 1995 with the conclusion that it was never useful in any intelligence operation. Background[edit]

National Security Agency The National Security Agency (NSA) is a U.S. intelligence agency responsible for providing the United States government with encrypted communications (information assurance) and the reading of encrypted communications (signals intelligence) of other nations. The NSA also creates and maintains secure computer network operations for the U.S. Government and prepares for network warfare.[8] Originating as a unit to decipher code communications in World War II, it was officially formed as the NSA by President Truman in 1952. Since then, it has become one of the largest of U.S. intelligence organizations in terms of personnel and budget,[6][9] operating under the jurisdiction of the Department of Defense and reporting to the Director of National Intelligence.

NSA Prism program taps in to user data of Apple, Google and others The National Security Agency has obtained direct access to the systems of Google, Facebook, Apple and other US internet giants, according to a top secret document obtained by the Guardian. The NSA access is part of a previously undisclosed program called Prism, which allows officials to collect material including search history, the content of emails, file transfers and live chats, the document says. The Guardian has verified the authenticity of the document, a 41-slide PowerPoint presentation – classified as top secret with no distribution to foreign allies – which was apparently used to train intelligence operatives on the capabilities of the program. The document claims "collection directly from the servers" of major US service providers.

Edward Snowden comes forward as source of NSA leaks In an interview Sunday, Snowden said he is willing to face the consequences of exposure. “I’m not going to hide,” Snowden told The Post from Hong Kong, where he has been staying. “Allowing the U.S. government to intimidate its people with threats of retaliation for revealing wrongdoing is contrary to the public interest.” Asked whether he believes that his disclosures will change anything, he said: “I think they already have. If your friends or family have fallen for an internet conspiracy cult, here's what you should do How do you rescue someone you love from the clutches of an internet conspiracy cult? Do you maybe tell them that the operator of the “most prominent” website devoted to the unhinged, fact-free QAnon conspiracy theory was recently rumbled as a senior vice-president at Citibank? It’s important to say this is not a step towards a paywall We need more readers to register with us to help sustain our independent, quality journalism.

Operation Paperclip Operation Paperclip (originally Operation Overcast) (1949–1990) was the Office of Strategic Services (OSS) program in which over 1,500 German scientists, engineers, and technicians from Nazi Germany and other foreign countries were brought to the United States for employment in the aftermath of World War II.[1] It was conducted by the Joint Intelligence Objectives Agency (JIOA), and in the context of the burgeoning Cold War. One purpose of Operation Paperclip was to deny German scientific expertise and knowledge to the Soviet Union[1] and the United Kingdom,[2] as well as inhibiting post-war Germany from redeveloping its military research capabilities. The Soviet Union had competing extraction programs known as "trophy brigades" and Operation Osoaviakhim.[3] Although the JIOA's recruitment of German scientists began after the Allied victory in Europe on May 8, 1945, U.S. President Harry Truman did not formally order the execution of Operation Paperclip until August 1945. Rocketry

Operation Paperclip Operation Paperclip was the Office of Strategic Services (OSS) program used to recruit the scientists of Nazi Germany for employment by the United States in the aftermath of World War II. It was conducted by the Joint Intelligence Objectives Agency (JIOA), and in the context of the burgeoning Cold War. One purpose of Operation Paperclip was to deny German scientific expertise and knowledge to the Soviet Union[1] and the United Kingdom,[2] as well as inhibiting post-war Germany from redeveloping its military research capabilities. Although the JIOA's recruitment of German scientists began after the Allied victory in Europe on May 8, 1945, U.S.

British state 'covered up plot to assassinate King Edward VIII' It has all the hallmarks of a 21st-century political thriller, including a plot to assassinate a controversial monarch, an MI5 double agent, and claims of a high-level cover-up. In 1936, an MI5 informant called George McMahon tried to assassinate King Edward VIII as he rode his horse near Buckingham Palace. Just as he was taking aim with a revolver, a woman in the crowd grabbed his arm and a policeman punched him, causing the weapon to fly into the road and strike the monarch’s mount. At his Old Bailey trial, McMahon insisted that a foreign power had paid him to kill the king and that he had deliberately bungled the assassination. Portrayed as a fantasist, he was convicted on a lesser offence of “unlawfully possessing a firearm and ammunition to endanger life” and imprisoned for 12 months.