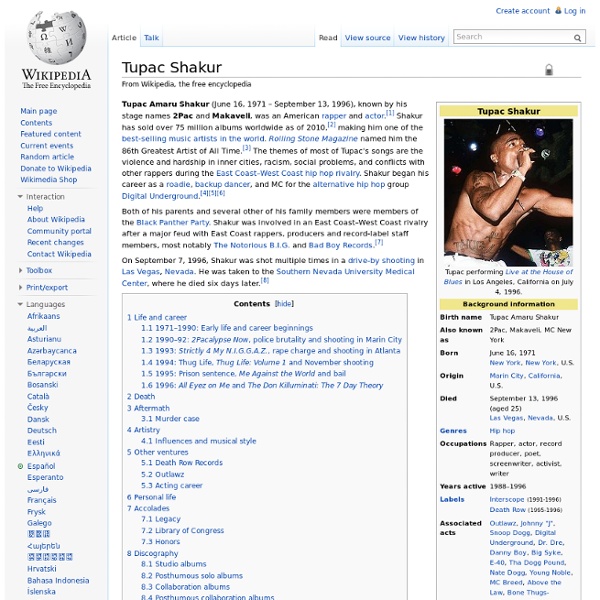 The Notorious B.I.G. Christopher George Latore Wallace (May 21, 1972 – March 9, 1997), better known by his stage names The Notorious B.I.G., Biggie or Biggie Smalls,[2] was an American rapper. Wallace was raised in the Brooklyn borough of New York City. When he released his debut album Ready to Die in 1994, he became a central figure in the East Coast hip hop scene and increased New York's visibility in the genre at a time when West Coast hip hop was dominant in the mainstream.[3] The following year, Wallace led his childhood friends to chart success through his protégé group, Junior M.A.F.I.A. While recording his second album, Wallace was heavily involved in the growing East Coast/West Coast hip hop feud. On March 9, 1997, Wallace was killed by an unknown assailant in a drive-by shooting in Los Angeles. Life and career 1972–94: Early life, arrests, career beginnings and first child Born in St. 1994: Ready to Die and marriage 1995: Junior M.A.F.I.A., Conspiracy and coastal feud

» 11 Ways to Cure Someday Syndrome Editor’s note: This is a guest post from Alex Fayle of the Someday Syndrome blog. Someday Syndrome: not doing what you want to because you don’t know what it is, because you’re procrastinating about it, or because you have too much stuff getting in your way. Everyone suffers from Someday Syndrome at some point in their lives, often catching it repeatedly. You probably have something similar going on in your life – a project, a task, a goal – that you just haven’t got around to doing yet. I could quote Nike and say: Just Do It, but if it were that simple Someday Syndrome wouldn’t exist. I decided that here had to be an easier way than waiting for pain to push me into getting over myself and getting on with my goals. 1. Maybe you’re not doing something because in reality, it doesn’t fit with who you are. 2. There are some great tools available in the Simplicity category of ZenHabits. 3. 4. I have a goal of running 20K next November. 5. 6. 7. 8. Enough said. 9. Which would you prefer? 10.

1990s in music For music from a year in the 1990s, go to 90 | 91 | 92 | 93 | 94 | 95 | 96 | 97 | 98 | 99 Popular music in the 1990s saw the continuation of teen pop and dance-pop trends which had emerged in the 1970s and 1980s. Furthermore, hip hop grew and continued to be highly successful in the decade, with the continuation of the genre's golden age. Similarly to the 1980s, rock music was also very popular in the 1990s, yet, unlike the new wave and glam metal-dominated scene of the time, grunge,[1] Britpop, industrial rock and other alternative rock music emerged and took over as the most popular of the decade, as well as punk rock, ska punk and nu metal, amongst others, which attained a high level of success at different points throughout the years. It's difficult to gauge the lasting impact of 1990s music in popular culture. The U.S. and Canada[edit] Rock[edit] Alternative rock[edit] [edit] Grunge[edit] During the mid-1990s many grunge bands broke up or became less visible. Post-grunge[edit]

John F. Kennedy John Fitzgerald Kennedy (May 29, 1917 – November 22, 1963), commonly known as "Jack" or by his initials JFK, was an American politician who served as the 35th President of the United States from January 1961 until he was assassinated in November 1963. Kennedy was assassinated in Dallas, Texas on November 22, 1963. Lee Harvey Oswald was accused of the crime and arrested that evening. Jack Ruby shot and killed Oswald two days later, before a trial could take place. The FBI and the Warren Commission officially concluded that Oswald was the lone assassin. Since the 1960s, information concerning Kennedy's private life has come to light. Early life and education John Fitzgerald Kennedy was born at 83 Beals Street in Brookline, Massachusetts, on May 29, 1917, to businessman/politician Joseph Patrick "Joe" Kennedy, Sr. (1888–1969) and philanthropist/socialite Rose Elizabeth Fitzgerald (1890–1995). The Kennedy family at Hyannisport in 1931 with Jack at top left in white shirt. Congressional career

Alternative rock Alternative rock (also called alternative music, alt-rock or simply alternative) is a style of rock music that emerged from the independent music underground of the 1980s and became widely popular in the 1990s. In this instance, the word "alternative" refers to the genre's distinction from mainstream rock music. The term's original meaning was broader, referring to a generation of musicians unified by their collective debt[clarification needed] to either the musical style or simply the independent, DIY ethos of punk rock, which in the late 1970s laid the groundwork for alternative music.[4] At times, "alternative" has been used as a catch-all description for music from underground rock artists that receives mainstream recognition, or for any music, whether rock or not, that is seen to be descended from punk rock (including some examples of punk itself, as well as new wave, and post-punk). Origin of term[edit] Characteristics[edit] History[edit] 1980s[edit] Popularization in the 1990s[edit]

Johnny Cash John R. "Johnny" Cash (February 26, 1932 – September 12, 2003) was a singer-songwriter, actor, and author,[2] widely considered one of the most influential American musicians of the 20th century.[3] Although primarily remembered as a country icon, his genre-spanning songs and sound embraced rock and roll, rockabilly, blues, folk, and gospel. This crossover appeal won Cash the rare honor of multiple induction in the Country Music, Rock and Roll, and Gospel Music Halls of Fame. Cash was known for his deep bass-baritone voice,[a] distinctive sound of his Tennessee Three backing band, a rebelliousness[6][7] coupled with an increasingly somber and humble demeanor, free prison concerts,[8][page needed] and trademark look, which earned him the nickname "The Man in Black".[b] He traditionally began his concerts with the simple "Hello, I'm Johnny Cash."[c], followed by his signature "Folsom Prison Blues". Personal life[edit] Early life[edit] The Cash children were: Roy, Margaret Louise, Jack, J.

Grunge A number of factors contributed to grunge's decline in prominence. During the mid-to-late 1990s, many grunge bands broke up or became less visible. Nirvana's Kurt Cobain, labeled by Time as "the John Lennon of the swinging Northwest", appeared unusually tortured by success and struggled with an addiction to heroin before he died by suicide at the age of 27 in 1994. Origin of the term Some bands associated with the genre, such as Soundgarden, Pearl Jam and Alice in Chains, have not been receptive to the label, preferring instead to be referred to as "rock and roll" bands.[18][19][20] Ben Shepherd from Soundgarden stated that he "hates the word" grunge and hates "being associated with it. Characteristics Musical style Seattle music journalist Charles R. Instruments Electric guitar The relatively affordable, widely available BOSS DS-2 distortion pedal was one of the key effects (including the related DS-1) that created the growling, overdriven guitar sound in grunge. Guitar solos Bass guitar Drums

Top 10 Most Inspiring Quotes of Lao Tzu Lao Tzu was the most important spiritual Chinese sage. His name, which is also often called Laozi, literally means “Old Master” and is generally considered an honorific. He lived in the 6th century BC, at the same time as Confucius, who was born a generation after Lao Tzu. He once sought out Lao Tzu who told him “Strip yourself of your proud airs and numerous desires, your complacent demeanor and excessive ambitions. They won’t do you any good. Lao Tzu is the father of the Chinese spiritual tradition Taoism, mainly because of his text called Tao te Ching (Tao: the way of all life, te: the fit use of life by men, ching: text or classic). It is based on the Tao (The Way), which is the creator and sustainer of all things in the Universe, and the practice of doing by nondoing (wu-wei) that enables the disciple to unite with the Tao. Lao Tzu wrote his only book Tao Te Ching just before he walked away from the Chou empire he served. 1. This first sentence of his teachings seems paradoxical. 2.