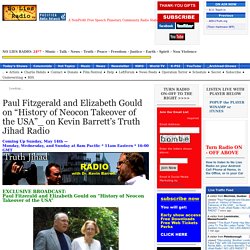 What precisely is neoconservatism, and how did it come to power? Most of the scholarship (Shadia Drury being a leading example) focuses on Leo Strauss and his cult followers – the hardline Zionists who seized power in the wake of the 9/11 coup d’état. But Gould and Fitzgerald have sketched an alternate history. This is historical revisionism at its finest! Will Trump end false flags and save Western civilization? Second hour: Rolf Lindgren – Republican / Libertarian activist and regular guest on mainstream talk radio here in Madison, Wisconsin – joins us to argue about history, current events, and Donald Trump. This show was broadcast on May 14, 2017. Invisible History Blog » Videos. The Arms Race and the Economy: A Delicate Balance Thursday, August 16th, 2012 The tangled web leading up to Afghanistan We made a documentary with economist John Kenneth Galbraith and Strategic Arms Limitation Talks (SALT II) negotiator Paul Warnke on the eve of the Soviet invasion of Afghanistan in 1979. 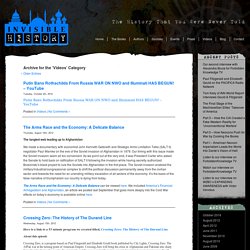 Our timing with this issue made the Soviet invasion seem all too convenient. As we point out at the very end, it was President Carter who asked the Senate to hold back on ratification of SALT II following the invasion while having secretly authorized Brzezinski’s black project to lure the Soviets into Afghanistan in the first place. The Arms Race and the Economy: A Delicate Balance can be viewed here. Crossing Zero, The Afghanistan War Wednesday, April 4th, 2012 Independent Voices Host David Frenkel interviews the coauthors of the book, Crossing Zero. Please check out this 1 hour 22 minute video on vimeo: Talk of the Town LIVE! Monday, August 30th, 2010. Jay Dyer w/Gould & Fitzgerald: Mystical Imperialism, Afghanistan & Beyond. Geopolitical Chessmaster: Legacy of Brzezinski – Jay Dyer on GlobalResearch. Illuminati Bilderberg Technocrat Brzezinki - Works Analyzed - Jay Dyer on Sunday Wire (Full) Colin Ross at Conspiracy Culture (November 10th 2012)

Donald Jeffries on Elite Privilege and Cronyism in the US Economy. Why Vietnam? Explaining the War. The JuntoCast, Ep. 15: Founders in Early America. The JuntoCast, Ep. 12: Bailyn's "Ideological Origins of the American Revolution" The Genius and Ambiguities of the American Founders: Achievements, Impact (2003) Globalization or Americanization with Ken Jowitt. CaspianReport. Week 3 Isaiah Berlin Two Concepts of Liberty. Why I Left the Left. Jay Dyer on Bilderberg, Corporatism and "Stupid Libertarianism" Peasants for Plutocracy: How the Billionaires Brainwashed America (Mini-Documentary) JaysAnalysis Interviews Patrick Henningsen on Geopolitics. Real History: Fascism & the Free Market - Michael Parenti. WikiLeaks - The US strategy to create a new global legal and economic system: TPP, TTIP, TISA.

Lawrence Lessig - What I Learned Running for President: The Ethics of Citizenship. Jim Douglass, JFK and the Unspeakable, COPA Dallas 2009. Porkins Policy Radio episode 51 Robbie Martin on A Very Heavy Agenda part 3. Political Theory and Real Politics in the Age of the Internet. FASCISM INC MULTILINGUAL (long version) The Yes Men fix the World. La démocratie revolutionnaire par Charlie Bauer. Mesopotamia - The Sumerians. Dr. Steven Jones - 9/11 Science & Society. THE LOST HEGEMON: NWO From Clinton To Trump. Suppressed Documentary Part 1: The Documentary on Donald Trump He Tried to Suppress. Donald Trump’s entire career has been about creating and projecting an image of himself that suits his needs. 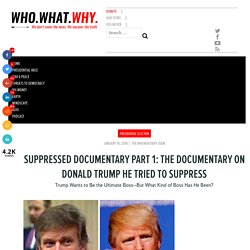 That has never been truer than during his current presidential bid. But what lies behind the image? Is Trump the genius and unremitting success he would have us believe? Is he the master of knowing how to pull all things off, how to win big while intimidating the bad guys and be loved by everyone else? Long ago — a quarter century ago — when Trump was already making noises about wanting to be president, some filmmakers set out to discover what the man was made of.