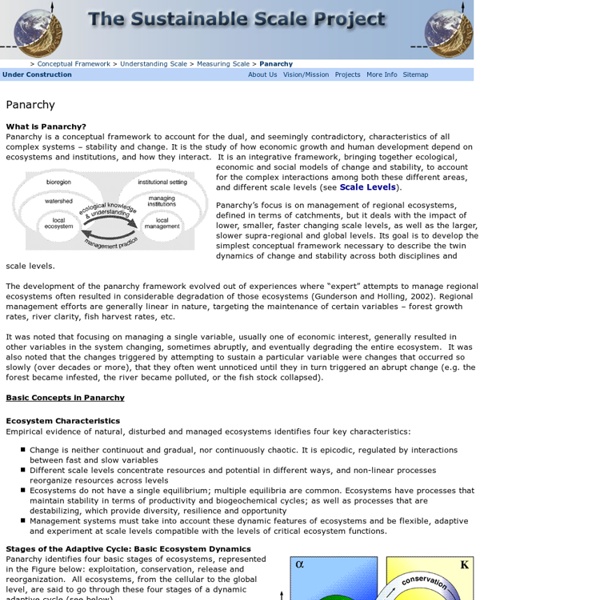 Panarchy What is Panarchy? Panarchy is a conceptual framework to account for the dual, and seemingly contradictory, characteristics of all complex systems – stability and change. It is the study of how economic growth and human development depend on ecosystems and institutions, and how they interact. It is an integrative framework, bringing together ecological, economic and social models of change and stability, to account for the complex interactions among both these different areas, and different scale levels (see Scale Levels). Panarchy’s focus is on management of regional ecosystems, defined in terms of catchments, but it deals with the impact of lower, smaller, faster changing scale levels, as well as the larger, slower supra-regional and global levels. The development of the panarchy framework evolved out of experiences where “expert” attempts to manage regional ecosystems often resulted in considerable degradation of those ecosystems (Gunderson and Holling, 2002). Adaptive Cycles

Cancer caused by modern man as it was virtually non-existent in ancient world "But in ancient times, it was extremely rare. There is nothing in the natural environment that can cause cancer. So it has to be a man-made disease, down to pollution and changes to our diet and lifestyle. How Hyperconnected Cities Are Taking Over the World, According to Parag Khanna “Political geography is not determinant anymore, because cities are more important.” In the medieval period, empires battled and colluded with each other in the quest for land. The resulting system, in which nations became the main actors on the global stage, is perhaps the one most of us know best. But it’s changing. We’re now moving toward a new era where insular, political boundaries are no longer as relevant.

Meghalaya villagers create 'living' bridges by training roots across a river By Daily Mail Reporter Updated: 15:35 GMT, 10 September 2011 Deep in the rainforests of the Indian state of Meghalaya, bridges are not built, they’re grown. Ancient vines and roots of trees stretch horizontally across rivers and streams, creating a solid latticework structure strong enough to be used as a bridge.

Exiting The Anthropocene and Entering The Symbiocene. Exiting The Anthropocene It has been proposed that humans are now living within a period of the Earth’s history appropriately named ‘The Anthropocene’ (Crutzen and Stoermer 2000). The name is derived from the observed human influence and indeed dominance of all climatic, biophysical and evolutionary processes occurring at a planetary scale. The issue is not simply climate change (as bad as that is) it is the whole Capitalist development paradigm that is at the dark heart of mal-development; that is, development that undermines and destroys the very foundations of all life on Earth.

Katya's Non-Profit Marketing Blog Thu, July 26 2012 Filed under: Marketing essentials • Last week, I blogged about how buying green products can make people feel they are off the hook for further good. In fact, their purchase might even give them a license for bad behavior. Today comes more interesting news for environmentalists—sent to me via Mark Rovner - saying that guilt doesn’t inspire people to go green. Image from National Geographic Will "deliverology" work for the federal government? Written by Date published Share Story In January, the newly minted government of Justin Trudeau held its first cabinet retreat. TreeHugger iFixit/CC BY-ND 3.0People are talking a lot about cell phone unlocking in the news this week. Until recently, unlocking mostly flew under the radar—a common technique used by consumers who need to use their phones with more than one carrier. But late last year the Librarian of Congress banned the practice, catapulting cell phone unlocking into the national spotlight. Unlocking is a software tweak that disables a device’s SIM lock.

Why Guest Posts Can Be Good For Your Nonprofit Blog Photo by ELEOTH In a recent blog post, one of our readers asked about guest posts on nonprofit blogs. Here was the question: To that, Gisele Navarro Mendez and I responded with an emphatic “Yes!” It’s true that many organizations—not just nonprofits—are a little hesitant to feature guest posts from people on the outside. ‘Smart’ Cities, ‘Brain Belts’ and Other Places Changing the Economy Robert Litan is an adjunct senior fellow at the Council on Foreign Relations and has directed economic research at the Brookings Institution, the Kauffman Foundation, and Bloomberg Government. His most recent book is “Trillion Dollar Economists.” He is on Twitter:@BobLitan. It’s easy amid the hype of a presidential campaign and frequent media reports of top-line numbers about the U.S. economy’s performance–gross domestic product, the unemployment rate, inflation–to overlook the people and technologies reshaping this country. James Fallows wrote about these remarkable developments in the March issue of the Atlantic.

Urban Green Council report: How New York City could cut emissions by 90 percent by 2050 Photo by Mario Tama/Getty Images Climate scientists have estimated that, in order to avoid runaway global warming, the world would need to cut its carbon emissions roughly in half by 2050. Since emissions in developing countries like China and India are still rising fast, meeting this target would require developed nations to aim for a figure more like 80 percent. Darwin's Wedge & Dumb Competition “Competition creates efficiency,” is preached as if it were a law of nature. But nature itself teaches a different lesson. Biological competition can create foolish costs, and collective doom. “Darwin’s Wedge” shows why and reminds us of the point of being human. Our competitions, and the myopic logic of free markets, needn’t be dumb as trees. “Tree trunks are standing monuments to futile competition” says Richard Dawkins.

Most Modern Day Diseases Are Man-Made The biggest killers, cardiovascular disease, cancer, diabetes and many other diseases are largely man-made and iatrogenic in origin, yet we ignorantly dismiss their growing incidence to factors which we assume are not preventable. Cancer Cancer is the leading cause of death worldwide and deaths are projected to continue rising, with an estimated 12 million in 2030. The claim by the World Health Organization is that only 30% of cancer deaths can be prevented. There is largely a misguided and misinformed statistic since cancer was a rarity more than 200 years ago, making the majority of cancer deaths 100% preventable since they have little to do with genetics or factors beyond our control.