The Declaration of Independence: Full text 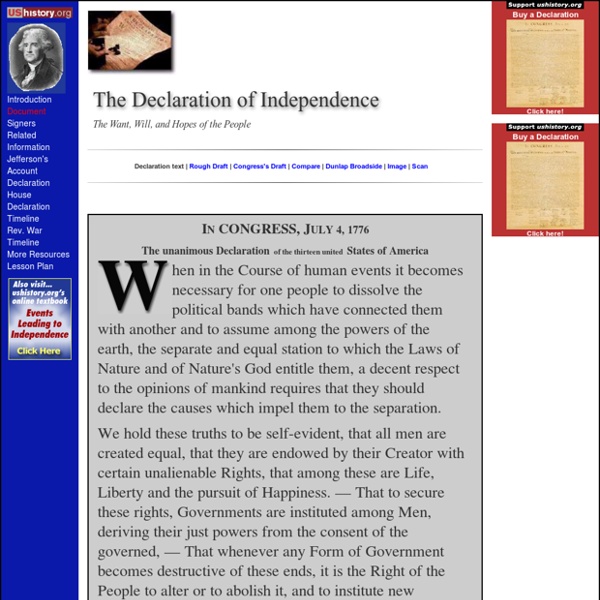 The unanimous Declaration of the thirteen united States of America hen in the Course of human events it becomes necessary for one people to dissolve the political bands which have connected them with another and to assume among the powers of the earth, the separate and equal station to which the Laws of Nature and of Nature's God entitle them, a decent respect to the opinions of mankind requires that they should declare the causes which impel them to the separation. He has refused his Assent to Laws, the most wholesome and necessary for the public good. He has forbidden his Governors to pass Laws of immediate and pressing importance, unless suspended in their operation till his Assent should be obtained; and when so suspended, he has utterly neglected to attend to them. He has called together legislative bodies at places unusual, uncomfortable, and distant from the depository of their Public Records, for the sole purpose of fatiguing them into compliance with his measures.

Inalienable Right Law and Legal Definition Inalienable right refers to rights that cannot be surrendered, sold or transferred to someone else, especially a natural right such as the right to own property. However, these rights can be transferred with the consent of the person possessing those rights. Inalienable is defined as incapable of being surrendered or transferred; at least without one's consent.[Morrison v. State, 252 S.W.2d 97, 101 (Mo. The Declaration of Independence also speaks about unalienable rights. For example, Illinois Const., Art. Some rights are made inalienable because the law prohibits the same. Natural Rights Thomas Jefferson, age 33, arrived in Philadelphia on June 20, 1775, as a Virginia delegate to the Second Continental Congress. Fighting at Lexington, Concord, and Bunker Hill had already broken out between the colonists and British troops. Even so, most in Congress wanted to work out some mutual agreement with the mother country. For more than a year, the Americans had sent petitions to England proclaiming their grievances against the British government. Soon after Jefferson arrived in Philadelphia, Congress assigned him to draft a document explaining why the colonists had taken up arms against England. Neither Parliament nor King George, however, were interested in negotiations to prevent all-out war. In May 1776, the Continental Congress took a fateful step and passed a resolution that attacked King George himself. The Declaration of Independence Working off and on while attending to other duties, Jefferson completed his draft of the declaration in a few days. Natural Rights Booknotes

Bill of Rights Institute When most of us think of “rights,” we imagine things we are free to do, like speak our minds, or practice a religion, or sell something that we have made. We assume, when we imagine these actions, that there is nobody stopping us from doing them. When we study history, however, we realize that many people in the past lacked—and a great many around the world today still lack—the freedom to exercise many of the rights we take for granted. The American Founders, however, argued that people have rights regardless of whether they are able to put them into practice. This is why they called these rights “natural.” They are part of what it means to be a person. When the Founders wrote in the Declaration of Independence that “all men are created equal,” they were not ignoring the obvious differences that make people individuals—differences in appearance, personality, aptitude, skills, and character. In other words, a right is one thing, but the freedom to exercise it is something else.

Unlawful Restraint Charges in Texas | Plano Criminal Defense Lawyer A lot of people are familiar with the concept of “kidnapping,” which refers to abduction and keeping a person against their will – not letting the victim move freely. Under Title 5, Chapter 20 of the Texas Penal Code, kidnapping is one crime and “unlawful restraint” is a separate offense. For the purpose of this post, we’re going to discuss the crime of unlawful restraint in Texas. For starters, let’s take a look at the definition of “restrain” under Section 20.01(1) of the Texas Penal Code: “‘Restraint’ means to restrict a person’s movements without consent, so as to interfere substantially with the person’s liberty, by moving the person from one place to another or by confining the person.” According to Sec. 20.01(1), restraint is without the person’s consent when it’s accomplished by: Force, Deception, Intimidation, or By any means if the victim is a child under 14-years-of-age. Are you facing criminal charges for unlawful restraint in Plano, Dallas, or Fort Worth?

False Imprisonment - FindLaw Thank you for subscribing! Created by FindLaw's team of attorney writers and editors. False imprisonment occurs when a person (who doesn't have legal authority or justification) intentionally restrains another person's ability to move freely. In fact, any person who intentionally restricts another's freedom of movement without their consent may be liable for false imprisonment, which is both a crime and a civil wrong just like other offenses including assault and battery. Similarly, "false arrest" is when someone arrests another individual without the legal authority to do so, which becomes false imprisonment the moment he or she is taken into custody. Elements of a False Imprisonment Claim All states have false imprisonment laws to protect against unlawful confinement. There was a willful detention;The detention was without consent; andThe detention was unlawful. False imprisonment can come in many forms; physical force is often used, but it isn't required. Voluntary Consent

Texas Assault Defenses If you are charged with assault in Texas, the first thing you will want to do is hire a criminal defense attorney. You and your attorney will then want to review the facts of your case to determine a defense strategy. Texas Assault Laws In general, assault in Texas is defined as performing an intentional act that gives another cause to think you are about to cause physical harm. Whether you actually do cause physical harm is beside the point. The mere move or threat to cause physical harm is enough to warrant assault charges in most cases. For example, waving a knife at someone or threatening someone with your fists are both examples of assault. Under Texas assault law, there are three ways you can be charged with assault. Threatening someone with imminent bodily injuryIntentionally causing bodily injuryIntentionally causing physical contact when the person knows such contact will be considered offensive Penalties for Assault in Texas You may be charged with a third-degree felony if:

Simple Assault in Texas A conviction for assault becomes part of your permanent criminal record. If you are convicted later of another crime, the court can consider your prior conviction and impose a harsher sentence in the new case. This article discusses simple assault in Texas. For information on aggravated assault and deadly conduct, see Aggravated Assault and Deadly Conduct in Texas. What is Simple Assault? Simple assault in Texas consists of: intentionally, knowingly, or recklessly causing bodily injury to another personintentionally or knowingly threatening another person with imminent bodily injury, orintentionally or knowingly causing physical contact with another that the offender knows or reasonably should know the victim will find provocative or offensive. (Tex. Bodily Injury “Bodily injury” means physical pain, illness, or any impairment of physical condition. (Tex. For information on more serious assaults in Texas, see Aggravated Assault and Deadly Conduct in Texas. Recklessness (Tex. Domestic Assault

Texas Assault and Battery Laws - FindLaw Thank you for subscribing! Created by FindLaw's team of attorney writers and editors. Many states treat assault and battery as two separate crimes, whereas some treat them as the same. The reason for this is because the offenses are very closely linked: "assault" occurs when someone threatens another with imminent bodily injury, while "battery" refers to actual bodily contact (either offensive or injurious in nature). Assault and battery also are considered intentional torts, which means you can sue someone for these actions in a civil court to get compensated for your injuries. In Texas, the elements for a case against a defendant for assault and battery are the same, although there are many different classifications for different degrees of the offense (charged as "assault" even if battery does occur). The following provides an overview of Texas assault and battery laws, charged collectively as just "assault." Texas Assault and Battery Laws at a Glance Related Resources

Texas Penal Code - PENAL § 22.01 | FindLaw (a) A person commits an offense if the person: (1) intentionally, knowingly, or recklessly causes bodily injury to another, including the person's spouse; (2) intentionally or knowingly threatens another with imminent bodily injury, including the person's spouse; or (3) intentionally or knowingly causes physical contact with another when the person knows or should reasonably believe that the other will regard the contact as offensive or provocative. (b) An offense under Subsection (a)(1) is a Class A misdemeanor, except that the offense is a felony of the third degree if the offense is committed against: (1) a person the actor knows is a public servant while the public servant is lawfully discharging an official duty, or in retaliation or on account of an exercise of official power or performance of an official duty as a public servant; (2) a person whose relationship to or association with the defendant is described by Section 71.0021(b) , 71.003 , or 71.005, Family Code , if: (2) against:

Inalienable Rights - Immigration What are Inalienable Rights? Inalienable rights (also referred to as natural or human rights) are rights awarded to human beings that may not be taken away by a religious or governmental institution, except in specific situations and according to due process of the law. For instance, the right to liberty may be limited if an individual is found guilty of a felony by a formal court of law. Inalienable rights are rights that are not dependent upon the customs, beliefs or laws of any particular government or culture. A legal right may be codified by a statutory, constitutional, contractual, common, and regulatory or international law. By contrast, the theory behind a natural or inalienable law is related to that of a human right—many societies do not recognize a difference between the two fields of law, while others will choose keep the terms separate to eliminate features that are associated with natural rights. Philosophy of Inalienable Rights: What are Human Rights? Comments comments