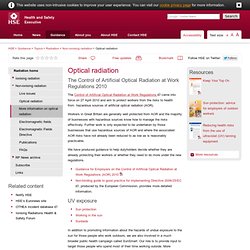 Workers in Great Britain are generally well protected from AOR and the majority of businesses with hazardous sources know how to manage the risks effectively. Further work is only expected to be undertaken by those businesses that use hazardous sources of AOR and where the associated AOR risks have not already been reduced to as low as is reasonably practicable.

We have produced guidance to help dutyholders decide whether they are already protecting their workers or whether they need to do more under the new regulations. UV exposure [7] in the pages about cancer/reducing risk. The Control of Artificial Optical Radiation at Work Regulations 2010. UK Guidance for Employers on AOR. Radiation vs Radioactive Atoms. IDTIMWYTIM: Radiation. Atoms and Isotopes. A-level Physics/Forces, Fields and Energy/The nuclear atom - Wikibooks, open books for an open world. Up until the 19th century, atoms were once thought to be the smallest building blocks of matter, and that matter could not be broken down any further. 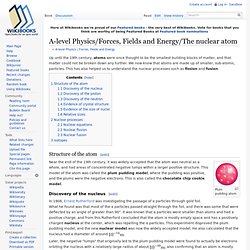 We now know that atoms are made up of smaller, sub-atomic, particles. This has also helped us to understand the nuclear processes such as fission and fusion. Force fields near a neutron or proton. Isotopes. Isotope notation. The structure of the atom. Table of the charge of atoms. Electromagnetic fields and public health: mobile phones. How Cell-phone Radiation Works" When talking on a cell phone, a transmitter takes the sound of your voice and encodes it onto a continuous sine wave (see How Radio Works to learn more about how sound is transmitted). 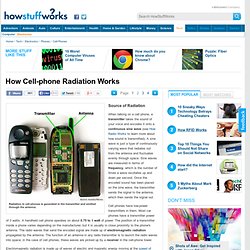 A sine wave is just a type of continuously varying wave that radiates out from the antenna and fluctuates evenly through space. Sine waves are measured in terms of frequency, which is the number of times a wave oscillates up and down per second. Once the encoded sound has been placed on the sine wave, the transmitter sends the signal to the antenna, which then sends the signal out. Cell phones have low-power transmitters in them. Most car phones have a transmitter power of 3 watts. Cell Phone Radio Waves Excite Brain Cells.

Hide captionA new study finds that radio waves from a cell phone can affect the metabolism of brain cells, though there is no evidence that the effect is harmful. 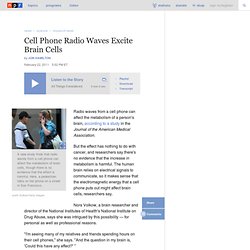 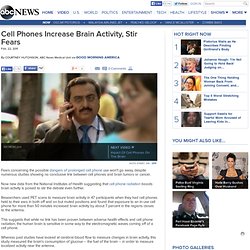 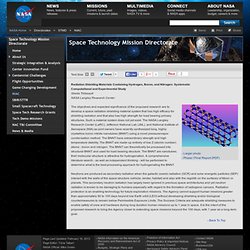 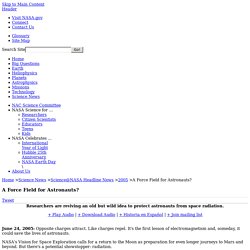 Like charges repel. It's the first lesson of electromagnetism and, someday, it could save the lives of astronauts. NASA's Vision for Space Exploration calls for a return to the Moon as preparation for even longer journeys to Mars and beyond. Space beyond low-Earth orbit is awash with intense radiation from the Sun and from deep galactic sources such as supernovas. Right: Supernovas produce dangerous radiation. The most common way to deal with radiation is simply to physically block it, as the thick concrete around a nuclear reactor does. Those are all physical solutions. Space Faring: The Radiation Challenge. 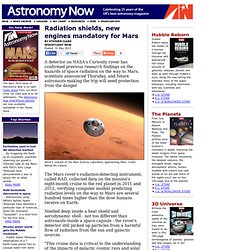