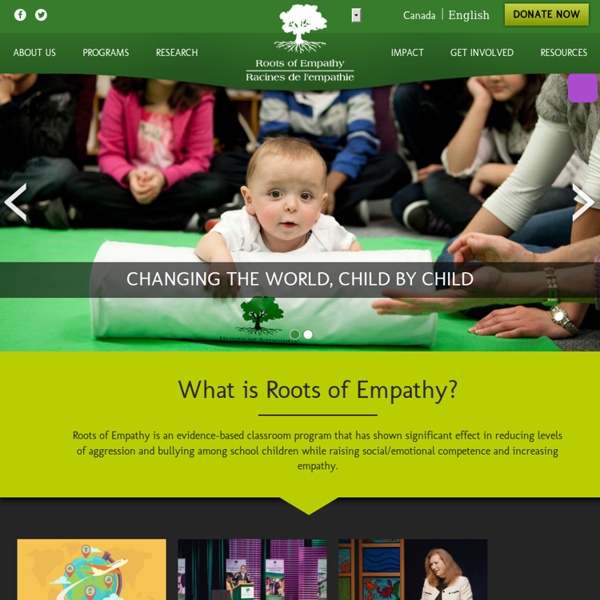 Guide to Peace, Development, Human Rights and Related Networking Sites If you haven’t noticed, here at the Peace and Collaborative Development Network, we are committed to providing a platform where interested people can connect with each other, share information, and find useful tools for their goals. However, we are obviously not alone. We believe that more networking means more opportunities. In this guide you will find other social networking sites devoted to promoting peace or social justice in one way or another. Some are very specific and some are much more general. This list is by no means comprehensive, but hopefully it helps broaden your horizons.

L’apprentissage de nouvelles compétences The world is changing—faster than ever before—from a society run by elites to a society in which everyone can be a changemaker. In this new world, empathy is one of the most important skills. Empathy is foundational to the ability to resolve conflict, collaborate in teams, align interests, listen effectively, and make decisions where there are no rules or precedents—to solve problems and drive change. Ashoka's Empathy Initiative is a collaborative platform for social entrepreneurs, educators, and concerned citizens whose ideas and talents can contribute to the creation of a world where every child practices empathy. We are bringing together a global network of Ashoka Fellows and other partners to work towards a society in which learning empathy is as fundamental as reading and math; where parents insist that their children develop empathy; and where institutions cultivate empathy learning and practice.

Linking Peacebuilders: Key Network Organizations in the Field Dear Colleagues As the conflict resolution and peacebuilding field has grown an increasing number of organizations and associations have been formed to help share information, exchange best practice, work on conflict advocacy, etc. Some organizations are more practitioner focused and concentrate more on organizations, while others are more for individuals and possibly more academic and research focused (and a number combine both approaches). What I would like to start is a listing of some of the key network organizations in the field around the world and then ask you to help add to the list.

About Vision We believe that through creative and critical engagement with practices in art and technology people are inspired and enabled to become active co-creators of their cultures and societies. Why now? Art and technologies play a central role in the way we see and form our societies. Quiet Time with Transcendental Meditation in Schools Stress: the #1 enemy of learning In low-income urban schools, traumatic stress is a reality for millions of children who grow up in an oppressive climate of poverty, violence, and fear. This stress impedes learning and undermines physical and mental health: 25% of teenagers suffer from anxiety disorders6.5 million children struggle from disabilities that impair their ability to learnOne in four high school students has been offered, sold or given illegal drugs on school propertyOne in three children are either overweight or obeseNearly 3 million children receive medication for ADHDSuicide is the third leading cause of death among teenagers

Mindset for Achievement What is Talent—and How Important Is It? What Lies Behind Great Achievement? What Stops People From Pursuing Their Dreams? How To Boost Achievement (and Fulfillment) Through Mindset Benjamin Barber, an eminent sociologist, once said, “I don’t divide the world into the weak and the strong, or the successes and the failures... I divide the world into the learners and nonlearners.” In most places around the globe, violence has stopped making sense Are we living through the least violent moment in human history? Has there ever been an age, during the past 10,000 years, with fewer wars or mass killings or chances of being murdered? The answer seems, to me, almost self-evident. There are terrible wars today, but they are extremely scarce, not very intense and do not affect the lives of many people. If we assume that Afghanistan, Iraq, Libya, Sudan, Syria and Somalia are all “at war” today and all their people are affected, that means that just over 2 per cent of the world’s people know war.

Parents' Guide to Inside Out - Paul Ekman Group, LLC Inside Out is Pixar’s widely popular movie which focuses on emotions and family dynamics. This wondrous, funny, beautiful, and ground breaking film provides a unique view into how parents and children relate. Inside Out recently won a host of awards, including the Golden Globe and Annie Award for Best Animated Feature Film. Inside Out navigates through the minds of Riley and her parents, as they experience five different emotions: anger, sadness, disgust, fear, and happiness. Since emotions can be a difficult subject to talk about, Dr. Naked Protesting - Hot 'Chicks' Battle KFC in Australia PETA has been leading the “naked” protesting” trend in a series of nonviolent (and eye-pleasing) protests involving hot women and men getting naked to draw public attention to pressing issues of animal cruelty—bull fighting, live export, and factory farming. Their most recent campaign targets the poultry giant KFC, which retails an estimated 736 million chickens annually (NYT). PETA has been successful in the past, raising awareness about the unethical treatment of cattle by McDonalds and Burger King chains.

Santa Barbara Institute for Consciousness Studies Important Links: Listen to talk on Shamatha Project by B. Alan Wallace recorded at Unity Church, Santa Barbara, CA December 19, 2007 DVD of Unity Church talk available at SBI Store. - Support-A-Yogi Program The Shamatha Project: Meditative Quiescence, Loving-Kindness, and Human Flourishing Longitudinal Studies of Effects of Intensive Meditation Practice on Attention, Emotional Regulation, and Their Neural Correlates Recent studies of the effects of meditation practices on stress management and emotional stability and of meditation as a therapeutic agent have produced exciting results. But the studies conducted to date have been short-term and have generally used non-intensive interventions. We have engaged a team of talented neuroscientists and psychologists in a longer-term study, with state-of-the-art methods, to examine the effects of intensive meditation training on attention, cognitive performance, emotion regulation, and health.

Stripping Down for Alter-Globalization - European Social Forum Protest Now this is what a real naked protest looks like: no clothes. Well, almost. You have to count out one pair of socks, but it’s much more worthy of the title than those half-arsed efforts with undies-wearing anti-KFC impostors. I mean, if you’re gonna do it, do it right and go all for it! So what’s all the fuss about? Well, it’s the European Social Forum being held in Malmo, Sweden. FREE THE MIND - A DOCUMENTARY FILM BY PHIE AMBO More American soldiers commit suicide after they return from war, than are being killed in the war. Most of the war veterans suffer from PTSD. Steve is one of the proud American veterans who just returned from Afghanistan. He was an interrogator and very good at his job.

The Altruism Revolution - Java Films For generations, we have believed that man is driven by ruthless self-interest. But over the past decade, this idea has been increasingly challenged. New research from fields as diverse as political science, psychology, sociology and experimental economics is forcing us to rethink human actions and motivation. There are strong biological reasons to believe why group co-operation may beat being selfish. Young children exhibit spontaneous altruistic behaviour with one year olds demonstrating the ability to form and commit to a joint goal with adults. There are countless examples of selfless behaviour in nature.