History and Politics Out Loud: a searchable archive of politically significant audio materials 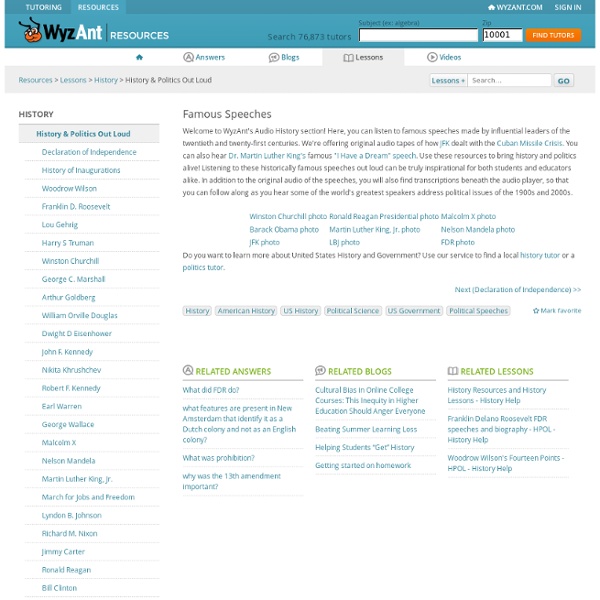 The Beats and Sixites Counterculture The 1960s are associated with what Frank calls ‘the big change, the birthplace of our own culture, the homeland of hip’, a period of various shifts that have shaped our current society[1]. This hints at an underlying consensus that the 1960s were a time of high artistic endeavour, the centre of countercultural resistance, and some of the cultural ripples that are still being felt today. by Jed Skinner What factors influenced this period of time for this decade to be so prominent?

Herstory Herstory or hertory is history written from a feminist perspective, emphasizing the role of women, or told from a woman's point of view. It is a neologism coined in the late 1960s as part of a feminist critique of conventional historiography,[1] with the word "history" reinterpreted, using a false etymology, as "his story." (The word "history"—from the Ancient Greek ἱστορία, or historia, meaning "knowledge obtained by inquiry"—is etymologically unrelated to the possessive pronoun his.)[2] Free Audio &amp; Video - Free Audio Books, Lectures, &amp; Speeches on MP3 Download and Streaming Video Sort by Titles Per Page 1 - 10 of 10068 Titles The Industrial Revolution and the changing face of Britain An exhibition at the Barber Institute of Fine Arts (2008-9) During the late 18th and early 19th centuries, Britain experienced change in all aspects of life, as a result of the Industrial Revolution. Scientific advances and technological innovations brought growth in agricultural and industrial production, economic expansion and changes in living conditions, while at the same time there was a new sense of national identity and civic pride. The most dramatic changes were witnessed in rural areas, where the provincial landscape often became urban and industrialized following advances in agriculture, industry and shipping. Wealth accumulated in the regions and there was soon a need for country banking.

Stanislav Petrov: The man who may have saved the world Media playback is unsupported on your device Thirty years ago, on 26 September 1983, the world was saved from potential nuclear disaster. In the early hours of the morning, the Soviet Union's early-warning systems detected an incoming missile strike from the United States. Computer readouts suggested several missiles had been launched. The protocol for the Soviet military would have been to retaliate with a nuclear attack of its own.

The Listening Post Live audio (10 secs.) | Streaming (Experimental) | Last 25 frequencies | Tuning controls News & Notes Current Receiver Tuning Frequency: 15.40000*MHz Modulation: AM IF Bandwidth: 6.0 KHz Auto. The Story of Propaganda The fact that wars give rise to intensive propaganda campaigns has made many persons suppose that propaganda is something new and modern. The word itself came into common use in this country as late as 1914, when World War I began. The truth is, however, that propaganda is not new and modern. Nobody would make the mistake of assuming that it is new if, from early times, efforts to mobilize attitudes and opinions had actually been called “propaganda.” The battle for men’s minds is as old as human history. In the ancient Asiatic civilization preceding the rise of Athens as a great center of human culture, the masses of the people lived under despotisms and there were no channels or methods for them to use in formulating or making known their feelings and wishes as a group.

A Brief History of Water and Health Attachments( 3 files ): 3 image files Water is life – and life on earth is linked to water. Our existence is dependent on water, or the lack of it, in many ways, and one could say that our whole civilization is built on the use of water. This article examines the influence of water on public health throughout history. Farming and the development of settlements lead to the beginning of the problem that faces mankind today – how to get drinkable water for humans and cattle and how to manage the waste we produce. The availability of water in large quantities has been considered an essential part of civilization throughout the different periods: Roman baths needed a lot of water, as do the water closets and showers used in current Western civilization.

History Shows: NOVA, History Detectives & More Debt of Honor | Trailer Stories of Service PBS A moving tribute to the history of disabled veterans and an unflinching look at the reality of warfare and disability featuring interviews with some of the country’s most prominent disabled veterans. Narrated by leading scholars in disability studies, history and psychology, the film vividly illustrates the human cost of war. Premieres Tuesday, November 10, 2015 at 9/8c. Check local listings.