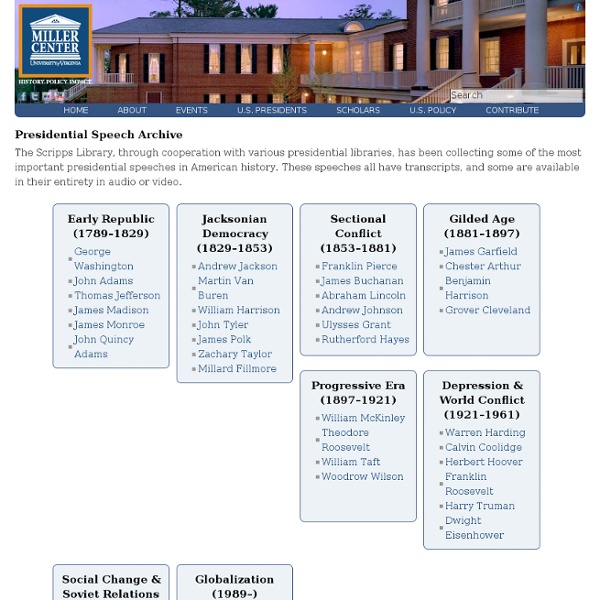 SoJust.net: Social Justice and Civil Rights Speeches Bella AbzugPlenary Address, Fourth World Congress on Women (1995) John AdamsInaugural Address (1797) Jane AddamsThe Subjective Necessity for Social Settlements (1892)The Modern Lear (1896) Susan B. AnthonyOn Women's Right to Vote (1872) Religion and the Founding of the American Republic This exhibition demonstrates that many of the colonies that in 1776 became the United States of America were settled by men and women of deep religious convictions who in the seventeenth century crossed the Atlantic Ocean to practice their faith freely. That the religious intensity of the original settlers would diminish to some extent over time was perhaps to be expected, but new waves of eighteenth century immigrants brought their own religious fervor across the Atlantic and the nation's first major religious revival in the middle of the eighteenth century injected new vigor into American religion. The result was that a religious people rose in rebellion against Great Britain in 1776, and that most American statesmen, when they began to form new governments at the state and national levels, shared the convictions of most of their constituents that religion was, to quote Alexis de Tocqueville's observation, indispensable to the maintenance of republican institutions.

Immigration Timeline - The Statue of Liberty & Ellis Island By the 1880's, steam power had shortened the journey to America dramatically. Immigrants poured in from around the world: from the Middle East, the Mediterranean, Southern and Eastern Europe, and down from Canada. The door was wide open for Europeans. In the 1880s alone, 9% of the total population of Norway emigrated to America. Women and Social Movements in the United States, 1600-2000