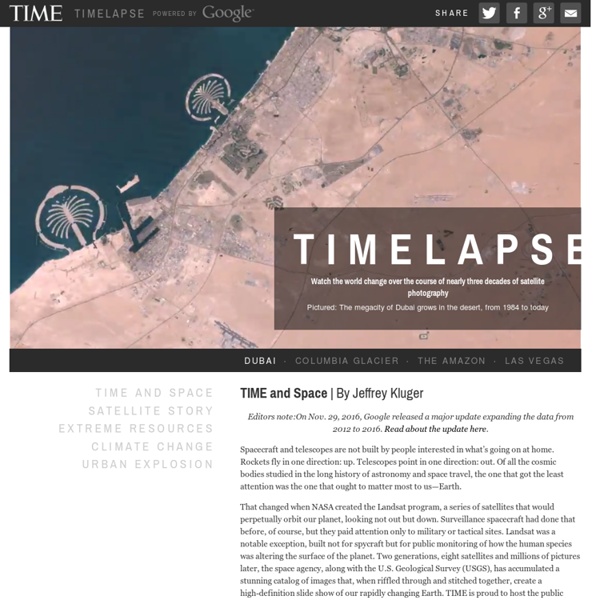 TIME and Space | By Jeffrey Kluger Editors note:On Nov. 29, 2016, Google released a major update expanding the data from 2012 to 2016. Read about the update here. Spacecraft and telescopes are not built by people interested in what’s going on at home. Rockets fly in one direction: up. Telescopes point in one direction: out. That changed when NASA created the Landsat program, a series of satellites that would perpetually orbit our planet, looking not out but down. Over here is Dubai, growing from sparse desert metropolis to modern, sprawling megalopolis. It took the folks at Google to upgrade these choppy visual sequences from crude flip-book quality to true video footage. These Timelapse pictures tell the pretty and not-so-pretty story of a finite planet and how its residents are treating it — razing even as we build, destroying even as we preserve. Chapter 1: Satellite Story | By Jeffrey Kluger But in 1966, Udall and his staff had an idea. 1 of 20 Aaron Vincent Elkaim / Boreal Collective

From the Summits of Empire IN THE EARLY HOURS OF 15 JANUARY 1934, an earthquake of magnitude 8.4 rocked Nepal and Bihar. Fissures as much as five kilometres deep opened in the earth, exhaling a choking dust and swallowing hillsides and villages. Ten thousand people died without leaving their beds. Although Kathmandu was relatively unscathed, nearby Patan was upheaved; large portions of the prime minister’s private palace were razed, and the town’s Durbar Square filled up with rubble. In distant Calcutta, the bell tower and steeple of St Paul’s Cathedral collapsed, the crash accompanied by a tremendous clang. As the Indian and Eurasian tectonic plates shifted into a more comfortable position beneath the earth’s surface, new lakes filled up behind landslides in the Himalayas and more people lost their lives in shuddering aftershocks.

Microsoft is interesting again — very Microsoft has been largely dead to Silicon Valley because for the past decade they struggled in — or completely missed — the last five major technology movements. Those five movements, and who they lost to are: 1/open source (to Linux, MySQL, etc.) 2/search (to Google) 3/mobile (to Apple) 4/social (to Facebook) 5/cloud (to Amazon) In this piece: why MSFT failed (dividends), why they’re back (Satya) & what 7 things they can do to be as important to the future as Apple, Google, and Facebook. [ Click to Tweet (can edit before sending): ]

If the Earth Stood Still - What Would Happen if the Earth Stopped Spinning? Modeling the absence of centrifugal force By Witold Fraczek, Esri This article as a PDF. The following is not a futuristic scenario. 10 Strange Things About The Universe Space The universe can be a very strange place. While groundbreaking ideas such as quantum theory, relativity and even the Earth going around the Sun might be commonly accepted now, science still continues to show that the universe contains things you might find it difficult to believe, and even more difficult to get your head around. Theoretically, the lowest temperature that can be achieved is absolute zero, exactly ?273.15°C, where the motion of all particles stops completely. However, you can never actually cool something to this temperature because, in quantum mechanics, every particle has a minimum energy, called “zero-point energy,” which you cannot get below.

1746 map of London now available as an incredibly detailed Google map The Centre for Metropolitan History and Museum of London Archaeology wanted a map that could help them visualise data from the 18th and 19th centuries. They started by taking John Rocque’s 1746 map of London, putting the 24 parts together, then georeferencing it. (For non-cartographers, georeferencing is “the process by which an electronic image of the earth is located on to the earth in the right place, so that the features it depicts overlie the same features shown on a current measured reality”.)

Space-age entrepreneur Updated: 2015-01-30 08:42 By Cecily Liu(China Daily Europe) Oxford University graduate is turning space agency's technologies into commercial baby-care products Deforestation in the Democratic Republic of the Congo Flying hundreds of kilometers above the Earth, satellites rarely see the human suffering from war and poverty. But decades of unrest have left a very visible impact on the Democratic Republic of the Congo (DRC). The DRC contains half of Africa’s tropical forest and the second largest continuous tropical forest in the world.