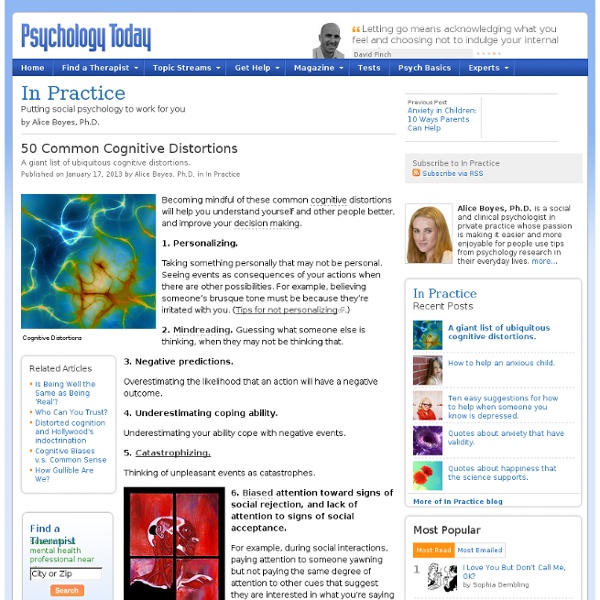 3. Negative predictions. Overestimating the likelihood that an action will have a negative outcome. 4. Underestimating coping ability. Underestimating your ability cope with negative events. 5. Thinking of unpleasant events as catastrophes. 6. For example, during social interactions, paying attention to someone yawning but not paying the same degree of attention to other cues that suggest they are interested in what you’re saying (such as them leaning in). 7. Remembering negatives from a social situation and not remembering positives. 8. Believing an absence of a smiley-face in an email means someone is mad at you. 9. The belief that achieving unrelentingly high standards is necessary to avoid a catastrophe. 10. Believing the same rules that apply to others should not apply to you. 11. For example, I’ve made progress toward my goal and therefore it’s ok if I act in a way that is inconsistent with it. 12. For example, believing that poor people must deserve to be poor. 13. 14. It’s not. 15. 16.

Scottish people's DNA study could 'rewrite nation's history' A large scale study of Scottish people's DNA is threatening to "rewrite the nation's history", according to author Alistair Moffat. Scotland, he told the Edinburgh international book festival, despite a long-held belief that its ethnic make-up was largely Scots, Celtic, Viking and Irish, was in fact "one of the most diverse nations on earth". "The explanation is simple. We are a people on the edge of beyond; on the end of a massive continent. Peoples were migrating northwest; and they couldn't get any further.

Fallacies Fallacies Fallacies are arguments that may sound logical, but are not. When you look at some of the examples below, you may see some with conclusions you agree with and some you don't. But the truth, in the empirical sense, is not what is at issue: What these examples are all about is logical argument.

Editing Reality In September 2007, the British press reported on an unusually macabre story. Ten years earlier, a widow had died at the age of 84 from an embolism brought on by a thrombosis in one of the veins in her legs. However, the widow's two middle-aged daughters queried this cause of death, and asked the funeral parlour to keep their mother's cadaver in cold storage. Cognitive Dissonance Explanations > Theories > Cognitive Dissonance Description | Research | Example | So What? | See also | References Top 10 Common Faults In Human Thought Humans The human mind is a wonderful thing. Cognition, the act or process of thinking, enables us to process vast amounts of information quickly. For example, every time your eyes are open, you brain is constantly being bombarded with stimuli. You may be consciously thinking about one specific thing, but you brain is processing thousands of subconscious ideas. Unfortunately, our cognition is not perfect, and there are certain judgment errors that we are prone to making, known in the field of psychology as cognitive biases.

Erika Christakis: Why Mass Killers Are Overwhelmingly Male There’s a predictable cycle of mourning and recrimination that follows a massacre like the shootings last week in Aurora, Colo. First come the calls for unity and flags flown at half-mast. Then the national fissures appear: the gun lobby stiffens its spine as gun-control advocates make their case. Psychologists parse the shooter’s background, looking for signs of mental illness or family disarray. Politicians point fingers about “society run amok” and “cultures of despair.” Cognitive bias Some cognitive biases are presumably adaptive. Cognitive biases may lead to more effective actions in a given context.[7] Furthermore, cognitive biases enable faster decisions when timeliness is more valuable than accuracy, as illustrated in heuristics.[8] Other cognitive biases are a "by-product" of human processing limitations,[9] resulting from a lack of appropriate mental mechanisms (bounded rationality), or simply from a limited capacity for information processing.[10][11] A continually evolving list of cognitive biases has been identified over the last six decades of research on human judgment and decision-making in cognitive science, social psychology, and behavioral economics.

Self-Deception I: Rationalization In this new series I shall be examining some of the most important methods of self-deception , starting today with the ego defence of rationalization. Rationalization is the use of feeble but seemingly plausible arguments either to justify something that is difficult to accept or to make it seem ‘not so bad after all'. A person who has been rejected by a love interest convinces herself that he rejected her because he did not share in her ideal of happiness , and, what's more, that the rejection is a blessing in disguise in that it has freed her to find a more suitable partner.

15 styles of Distorted Thinking 15 styles of Distorted Thinking Filtering: You take the negative details and magnify them while filtering out all positive aspects of a situation. Polarized Thinking: Things are black or white, good or bad. List of cognitive biases Illustration by John Manoogian III (jm3).[1] Cognitive biases can be organized into four categories: biases that arise from too much information, not enough meaning, the need to act quickly, and the limits of memory. Cognitive biases are tendencies to think in certain ways that can lead to systematic deviations from a standard of rationality or good judgment, and are often studied in psychology and behavioral economics. There are also controversies over some of these biases as to whether they count as useless or irrational, or whether they result in useful attitudes or behavior. For example, when getting to know others, people tend to ask leading questions which seem biased towards confirming their assumptions about the person. However, this kind of confirmation bias has also been argued to be an example of social skill: a way to establish a connection with the other person.[8]