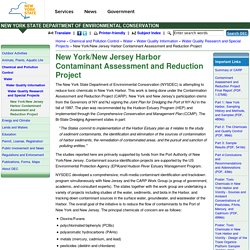 This work is being done under the Contamination Assessment and Reduction Project (CARP). AirNow. Rangel Neuroeconomics Laboratory. Computation of values in simple choice We have used fMRI to investigate the neural correlates of value computation in simple choices, showing that activity in the medial orbitofrontal cortex (mOFC) and the right dorsolateral prefrontal cortex (dlPFC) correlates with the value assigned to appetitive food items at the time of choice (Plassmann et al., 2007). 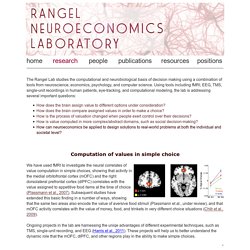 Subsequent studies have extended this basic finding in a number of ways, showing that the same two areas also encode the value of aversive food stimuli (Plassmann et al., under review), and that mOFC activity correlates with the value of money, food, and trinkets in very different choice situations (Chib et al., 2009). Ongoing projects in the lab are harnessing the uniqe advantages of different experimental techniques, such as TMS, single-unit recording, and EEG (Harris et al., 2011). These projects will help us to better understand the dynamic role that the mOFC, dlPFC, and other regions play in the ability to make simple choices. 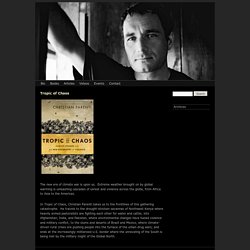 Extreme weather brought on by global warming is unleashing cascades of unrest and violence across the globe, from Africa to Asia to the Americas. In Tropic of Chaos, Christian Parenti takes us to the frontlines of this gathering catastrophe. He travels to the drought-stricken savannas of Northwest Kenya where heavily armed pastoralists are fighting each other for water and cattle; into Afghanistan, India, and Pakistan, where environmental changes have fueled violence and military conflict; to the slums and deserts of Brazil and Mexico, where climate-driven rural crises are pushing people into the furnace of the urban drug wars; and ends at the incrreasingly militarized U.S. border where the unraveling of the South is being met by the military might of the Global North. CO2 ACQUITTAL (Rocket Scientist's Journal) 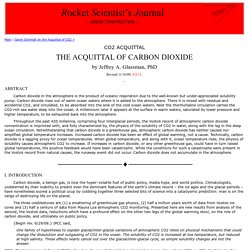 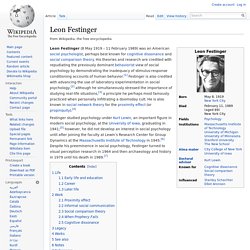 His theories and research are credited with repudiating the previously dominant behaviorist view of social psychology by demonstrating the inadequacy of stimulus-response conditioning accounts of human behavior.[1] Festinger is also credited with advancing the use of laboratory experimentation in social psychology,[2] although he simultaneously stressed the importance of studying real-life situations,[3] a principle he perhaps most famously practiced when personally infiltrating a doomsday cult. He is also known in social network theory for the proximity effect (or propinquity).[4] Life[edit] Early life and education[edit] Career[edit] In 1945, Festinger joined Lewin’s newly formed Research Center for Group Dynamics at the Massachusetts Institute of Technology as an assistant professor. 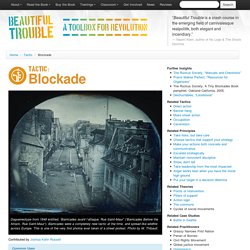 Barricades were a completely new tactic at the time, and spread like wildfire across Europe. This is one of the very first photos ever taken of a street protest. Photo by M. Thibault. Common Uses To physically shut down something bad (a coal mine, the World Trade Organization), to protect something good (a forest, someone’s home), or to make a symbolic statement, such as encircling a target (the White House). Blockades commonly have one of two purposes: first, to stop the bad guys, usually by targeting a point of decision (a boardroom), a point of production (a bank), or a point of destruction (a clearcut) see THEORY: Points of intervention; or second, to protect public or common space such as a building occupation or an encampment. Successful blockades can be primarily concrete or communicative see PRINCIPLE: Make your actions both concrete and communicative. News & Announcements - Bronx River Alliance. The Official Site of El Teatro Campesino.