Patrick Moore: Should We Celebrate Carbon Dioxide? Institution of Mechanical Engineers, London 14 London My Lords and Ladies, Ladies and Gentlemen. 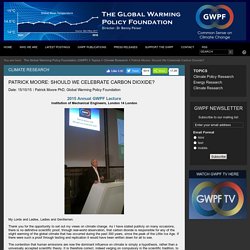 Thank you for the opportunity to set out my views on climate change. As I have stated publicly on many occasions, there is no definitive scientific proof, through real-world observation, that carbon dioxide is responsible for any of the slight warming of the global climate that has occurred during the past 300 years, since the peak of the Little Ice Age. If there were such a proof through testing and replication it would have been written down for all to see. The contention that human emissions are now the dominant influence on climate is simply a hypothesis, rather than a universally accepted scientific theory. But there is certainty beyond any doubt that CO2 is the building block for all life on Earth and that without its presence in the global atmosphere at a sufficient concentration this would be a dead planet.

But first a bit of background. Global Warming Is A blatant LIE & This video scientifically Proves it. Climate Change in 12 Minutes - The Skeptic's Case. Scott and Shackleton logbooks prove Antarctic sea ice is not shrinking 100 years after expeditions. CFACT Climate Truth File 2016. 'Global Warming' is a Crock of Sht. The Climate Change Scam, What its REALLY all about The David Icke Videocast.

Antarctica gaining more ice than losing – NASA. Antarctica has been accumulating more ice than it’s been losing in recent decades, a new study by NASA has revealed, challenging existing theories on climate change and rises in sea levels. 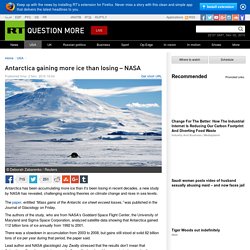 The paper, entitled “Mass gains of the Antarctic ice sheet exceed losses,” was published in the Journal of Glaciology on Friday. The authors of the study, who are from NASA’s Goddard Space Flight Center, the University of Maryland and Sigma Space Corporation, analyzed satellite data showing that Antarctica gained 112 billion tons of ice annually from 1992 to 2001. There was a slowdown in accumulation from 2003 to 2008, but gains still stood at solid 82 billion tons of ice per year during that period, the paper said.

Lead author and NASA glaciologist Jay Zwally stressed that the results don’t mean that Antarctica will continue gain ice perpetually, as the trend could reverse in just a couple of decades. Read more “But this is also bad news,” he stressed. Study: Mass Gains of Antarctic Ice Sheet Greater than Losses. The world's most viewed site on global warming and climate change. Climate Change, the Pope, and World Government. Scientists balk at ‘hottest year’ claims: Ignores Satellites showing 18 Year ‘Pause’ – ‘We are arguing over the significance of hundredths of a degree’ – The ‘Pause’ continues. 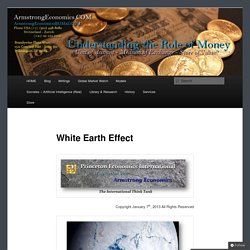 Why Everyone is Wrong about Climate Change. Tony CartalucciLocalOrg July 2, 2014 Assigning blame for climate change that will happen with or without human activity on Earth constitutes a disingenuous discourse. 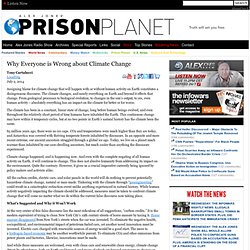 The climate changes, and nearly everything on Earth and beyond it effects that change. From geological processes to biological evolution, to changes in the sun’s output, to yes, even human activity – absolutely everything has an impact on the climate for better or for worse. 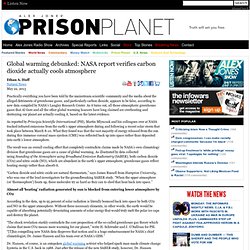 HuffNatural News May 22, 2013 Practically everything you have been told by the mainstream scientific community and the media about the alleged detriments of greenhouse gases, and particularly carbon dioxide, appears to be false, according to new data compiled by NASA’s Langley Research Center. As it turns out, all those atmospheric greenhouse gases that Al Gore and all the other global warming hoaxers have long claimed are overheating and destroying our planet are actually cooling it, based on the latest evidence. As reported by Principia Scientific International (PSI), Martin Mlynczak and his colleagues over at NASA tracked infrared emissions from the earth’s upper atmosphere during and following a recent solar storm that took place between March 8-10. What they found was that the vast majority of energy released from the sun during this immense coronal mass ejection (CME) was reflected back up into space rather than deposited into earth’s lower atmosphere.

Dr. Print this page. NASA funded report. Solar Storm Dumps Gigawatts into Earth's Upper Atmosphere March 22, 2012: A recent flurry of eruptions on the sun did more than spark pretty auroras around the poles. 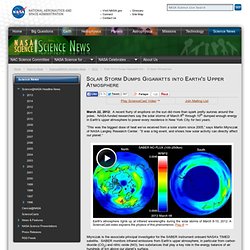 NASA-funded researchers say the solar storms of March 8th through 10th dumped enough energy in Earth’s upper atmosphere to power every residence in New York City for two years. “This was the biggest dose of heat we’ve received from a solar storm since 2005,” says Martin Mlynczak of NASA Langley Research Center. “It was a big event, and shows how solar activity can directly affect our planet.” Al Gore Set To Become First “Carbon Billionaire” CO2 tax agenda front man lining his pockets on the back of global warming fearmongering Paul Joseph WatsonPrison Planet.com Tuesday, November 3, 2009 The New York Times has lifted the lid on how Al Gore stands to benefit to the tune of billions of dollars if the carbon tax proposals he is pushing come to fruition in the United States, while documenting how he has already lined his pockets on the back of exaggerated fearmongering about global warming. 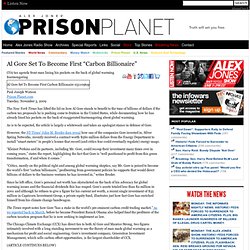 As is to be expected, the article is largely a whitewash and takes an apologist stance in defense of Gore. However, the NY Times‘ John M. Broder does reveal how one of the companies Gore invested in, Silver Spring Networks, recently received a contract worth $560 million dollars from the Energy Department to install “smart meters” in people’s homes that record (and critics fear could eventually regulate) energy usage. “Kleiner Perkins and its partners, including Mr. A d v e r t i s e m e n t. Map: The Climate Change Scare Machine — the perpetual self-feeding cycle of alarm.

Two professors of sociology think they can explain why “Climate Deniers” are winning. 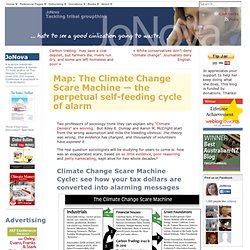 But Riley E. Dunlap and Aaron M. McCright start from the wrong assumption and miss the bleeding obvious: the theory was wrong, the evidence has changed, and thousands of volunteers have exposed it. The real question sociologists will be studying for years to come is: how was an exaggerated scare, based on so little evidence, poor reasoning and petty namecalling, kept alive for two whole decades?