The Guardian's '100 months to save the planet' was always just a fantasy. Experts said Arctic sea ice would melt entirely by September 2016 - they were wrong. No one ever says it, but in many ways global warming will be a good thing. El Niño pushes temperatures last month to highest ever levels for January. El Niño is continuing to break records after pushing the global average temperature last month to its highest ever level for January. 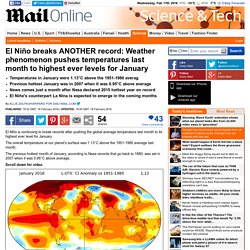 The overall temperature at our planet's surface was 1.13°C above the 1951-1980 average last month. The previous hottest month of January, according to Nasa records that go back to 1880, was set in 2007 when it was 0.95°C above average. Scroll down for video El Nino is continuing to break records, after pushing the global average temperature last month to its highest ever level for January. Shown here, the pattern of temperature anomalies around the world in January shows particular warmth in the high northern latitudes, across Canada, Greenland and Siberia. Apparent pause in global warming blamed on 'lousy' data. A widely reported "pause" in global warming may be an artefact of scientists looking at the wrong data, says a climate scientist at the European Space Agency. 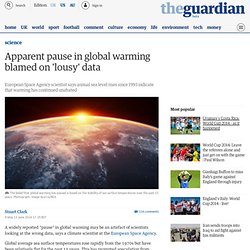 Global average sea surface temperatures rose rapidly from the 1970s but have been relatively flat for the past 15 years. Newsweek Rewind: Debunking Global Cooling. Recent estimates of low climate sensitivity were flawed. Earth’s climate system is a complex beast. 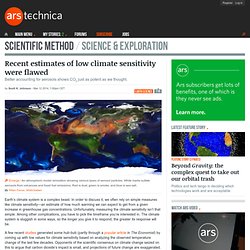 In order to discuss it, we often rely on simple measures like climate sensitivity—an estimate of how much warming we can expect to get from a given increase in greenhouse gas concentrations. Unfortunately, measuring the climate sensitivity isn’t that simple. Among other complications, you have to pick the timeframe you’re interested in. Climate change, El Niño, cold winters, and California’s drought. It was a winter Charles Dickens would write an opening line about. 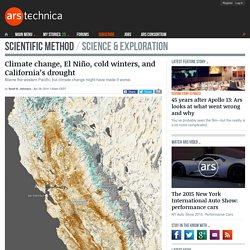 Parts of the Midwest and Eastern US experienced periods of bitterly cold weather delivered from the Arctic by the jet stream. The West Coast, meanwhile, received very little precipitation—producing a historic drought in California that looms large over the coming summer—as a result of the jet stream zagging in the opposite direction. The detours of the jet stream were large, and they were persistent. The northward-bending “ridge” shielded the West Coast from moisture-bearing weather that would normally water the Californian landscape and restock the supply of mountain snow that provides meltwater over the dry summer. What is El Niño — and why should I care? - El Niño could be the biggest weather story of 2014. Let's start by looking at things normally work in the Pacific Ocean, and then look at how things change during an El Niño (or a La Niña): 1) Neutral conditions: Normally, the tropical Pacific Ocean features strong trade winds that blow from east to west (see picture below). the Pacific Ocean normally has strong trade winds that blow east to west As those trade winds blow west, they bring ocean water with them, which gets heated up by the sun. 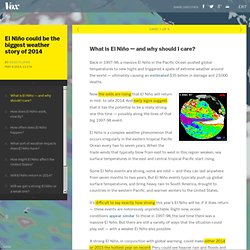 Why some tree ring records haven’t tracked recent warming. The release of e-mails hacked from University of East Anglia climate scientists in 2009 (unimaginatively dubbed “Climategate” in media scandalese) generated about as much public discussion as any report of the science has. 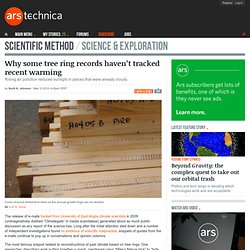 Long after the initial attention died down and a number of independent investigations found no evidence of scientific malpractice, snippets of quotes from the e-mails continue to pop up in conversations and opinion columns. The most famous snippet related to reconstructions of past climate based on tree rings. One researcher, describing work putting together a graph, mentioned using “Mike’s Nature trick” to “hide the decline. " It was exactly the nefarious-sounding sort of language that those who combed the e-mails for dirt wanted to find. Of course, it turned out to simply be a casual description of something much more mundane. Plants and animals can adapt to climate change, claim studies. Quino checkerspot butterfly defied expectation by moving to cooler climesSeparate research shows how corals can quickly switch on or off certain genes in order to survive in warmer-than-average tidal watersDNA evidence suggests European wasp spider is evolving into a new form Alpine chipmunks living in Yosemite National Park have moved to higher altitudes as the average temperature of the park has risen by 3°C By Ellie Zolfagharifard Published: 16:14 GMT, 7 May 2014 | Updated: 18:45 GMT, 7 May 2014 The quino checkerspot, found in Mexico and California, has moved to higher altitudes to avoid extinction, scientists claim As the planet warms, animals and plants are learning to adapt to their new environment by either migrating or evolving, new research has revealed. 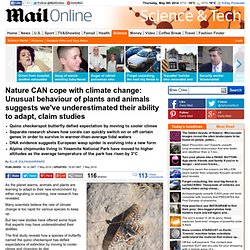 Many scientists believe the rate of climate change is too rapid for various species to keep up. Why HAS global warming has slowed? Scientists admit they don't know why. An intergovernmental study claims scientists are 95 per cent sure that humans are to blame for climate changeScientists believe volcanic ash and more heat being absorbed by oceans could explain why global warming seems to have decelerated in recent timesGovernments will use the final report to work out how to invest in renewable energy and protect coastal regions from flooding. 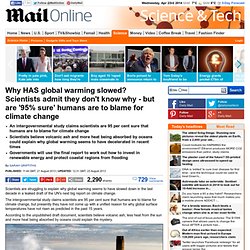 The climate change slowdown baffling scientists. Climate models failed to predict that the temperature rise would slowTheories for the pause include that deep oceans have taken up more heat with the result that the surface is cooler than expected By Daily Mail Reporter Published: 14:02 GMT, 16 April 2013 | Updated: 14:05 GMT, 16 April 2013. 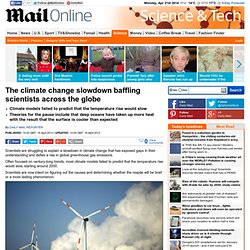 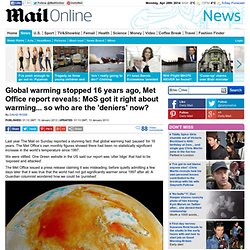 The crazy climate change obsession that's made the Met Office a menace. The £200 million-a-year official weather forecaster often gets it wrongThis week it has admitted there is no evidence that ‘global warming’ is happeningThe Met Office quietly readjusted its temperature projections on its website on Christmas Eve By James Delingpole Published: 00:45 GMT, 10 January 2013 | Updated: 18:13 GMT, 8 March 2013 Was there ever a government quango quite so useless as the Met Office? From its infamous ‘barbecue summer’ washout of 2009 to the snowbound winter it failed to predict in 2010 and the recent forecast-defying floods, our £200 million-a-year official weather forecaster has become a national joke. But of all its recent embarrassments, none come close to matching the Met Office’s latest one. Climate NON-change: No increase in droughts since 1950, say boffins. High performance access to file storage An international alliance of climate scientists says that contrary to the general perception, and despite widely-reported rises in global temperature towards the end of the 20th century, there has in fact been no measurable increase in droughts over the past 60 years.

Writing in heavyweight boffinry journal Nature, the team from America's Princeton and the Australian National University have this to say: Global warming still stalled since 1998, WMO Doha figures show. High performance access to file storage Figures released by the UN's World Meteorological Organisation indicate that 2012 is set to be perhaps the ninth hottest globally since records began - but that planetary warming, which effectively stalled around 1998, has yet to resume at the levels seen in the 1980s and early 1990s. The WMO figures are produced by averaging those from the three main climate databases: those of NASA, the US National Oceanic and Atmospheric Administration (NOAA) and the British one compiled jointly by the Met Office and the University of East Anglia. The 2012 figure for the year so far stands at 14.45°C.

If that were the figure for the full year, it would be cooler than 1998 (14.51°C) and most of the years since then (full listing from the Met Office here). DON'T PANIC: Arctic methane emissions have been going on for ages. High performance access to file storage Scientists returning from a seaborne expedition to the Arctic say that the ongoing panic in some quarters regarding runaway emissions of methane from the chilly polar seas - and associated imminent global-warming disaster - appears to be unjustified.

For those unacquainted with this particular panic, the idea is that rising Arctic sea temperatures caused by humans in recent times are causing methane locked up as hydrates on the chilly seabed to be emitted into the atmosphere as gas – as methane hydrates are only stable at very low temperatures and high pressures. Methane, as any fule kno, is a hugely more powerful greenhouse gas than CO2, so this would cause more warming which would then release more methane from the seabed until once again planet Earth becomes a baking lifeless hell. As ever with scenarios leading to baking lifeless hell, the hippies* at Greenpeace and similar activists are very keen on this idea. Comment. Swedish boffins: An ICE AGE is coming, only CO2 can save us.

High performance access to file storage A group of Swedish scientists at the University of Gothenburg have published a paper in which they argue that spreading peatlands are inexorably driving planet Earth into its next ice age, and the only thing holding back catastrophe is humanity's hotly debated atmospheric carbon emissions. "We are probably entering a new ice age right now.

However, we're not noticing it due to the effects of carbon dioxide," says Professor of Physical Geography Lars Franzén, from the Department of Earth Sciences at Gothenburg uni. Franzén and his colleagues have examined various scenarios for the peatlands of Sweden, which are a continually expanding "dynamic landscape element". Polar sea ice could set ANOTHER record this year.

New science upsets calculations on sea level rise, climate change. Ice core shows Antarctic Peninsula warming is nothing unusual. High performance access to file storage. Tree-ring study proves that climate was WARMER in Roman and Medieval times than it is in the modern industrial age. Lost photos prove Greenland's ice was melting FASTER 80 years ago than today. It's no wonder the world's cooling on climate change.

Republican 'denialism' grows with climate change splitting voters down party lines. Climate change is already proving to be a hot topic in the race to become the next U.S. president - and it’s one of those issues that's just guaranteed to polarise voters. Global warming: 'Women at greater risk' Butterflies and birds go north as climate warms: 250 species colonising new areas previously too cool for them. Scientists warn that Glacier National Park is melting even faster than before... and icecaps will be GONE by 2020. Satellite study of Asian mountains show that glaciers are NOT melting - and some are actually gaining new ice. Is this the 'cure' for global warming? Scientists flick the switch on Scottish trial that would 'bury' CO2 underground - and save the planet.