Unicode Text Converter. This toy only converts characters from the ASCII range. 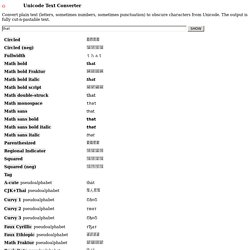 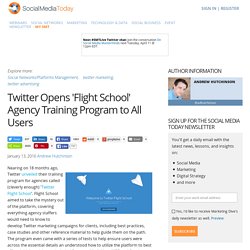 Flight School aimed to take the mystery out of the platform, covering everything agency staffers would need to know to develop Twitter marketing campaigns for clients, including best practices, case studies and other reference material to help guide them on the path. The program even came with a series of tests to help ensure users were across the essential details an understood how to utilize the platform to best effect. Initial participants included Starcom, MediaVest, WPP and Omnicom. Flight School proved immensely popular, with more than 15,000 staffers from major agencies taking part and completing the online coursework.

The program has proved so successful in fact that Twitter's decided to expand it, announcing this week that Flight School is now open to the people, with the platform offering the program for free, and in 16 different languages. Twitter Flight School. Deep Twitter Analytics. #GoLive Now: Twitter Launches Live Video - Search Engine Journal. How to Pin a Tweet and Why You Absolutely Should. Learning how to pin a Tweet is without a doubt the easiest thing you can do to improve your Twitter strategy. 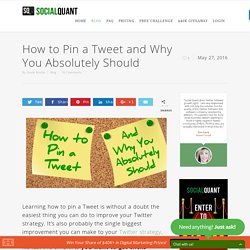 It’s also probably the single biggest improvement you can make to your Twitter strategy. It’s just this simple: if you want to get clicks through to your content on Twitter, a great pinned Tweet is your best opportunity. I’ll get to why in just a moment – plus a bonus hack most people don’t know about. But first, you came here to learn how to pin a Tweet – so let’s do it. For those of you who like to kick back and watch, Mike Kawula – CEO here at Social Quant – put together this “how to pin a Tweet” video that covers pretty much everything in this post: Or if you prefer reading – like me – come on and read on… Pick any Tweet and click those three dots off to the right to open a drop down menu.

Twitter Advanced Search: 8 Easy Ways To Find Marketing Gold. Finding something on Twitter can be a daunting task. 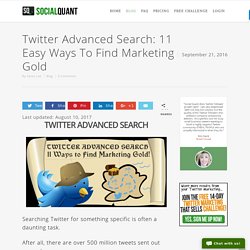 There are over 500 million tweets sent out on Twitter every day. Can you imagine filtering through that amount of content or data to find specific information useful to your business? It’d be like looking for a needle in a pile of other needles! The good news: it doesn’t have to be. Top 5 Must Have Twitter Tools - Social Quant - Twitter Growth Done Right. 7 Ways You Should Use The Powerful Twitter Search Engine - Social Quant - Twitter Growth Done Right. 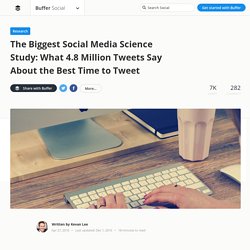 We’re so grateful for the chance to learn from the community on this! Imagine removing all guesswork when you schedule your tweets, knowing the best times to experiment with tweeting for maximum clicks and maximum engagement. As someone who is working on social media marketing strategy or shares frequently to social media, this info would be fantastic to have!

We’re always eager to dig up new research into social media best practices—things like length and frequency and timing. The timing element, in particular, feels like one where we’d love to dig deeper. With a big hand from our data team, we analyzed over 4.8 million tweets across 10,000 profiles, pulling the stats on how clicks and engagement and timing occur throughout the day and in different time zones. Update: Optimizing your schedule is one of the strategies I cover in the Actionable Social Media Strategies email course. Change Your Crappy Twitter Handle Without Losing Followers. So you want to change your Twitter handle. 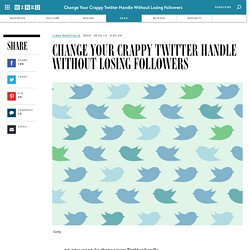 When you got it two years ago, @PlankingGuy was funny, but today you get quizzical looks. @SexxyFoxxyMama was okay in college, but not on your new business cards. Or you realized @ERMAHGERD520 was a bit too hard for people to spell after all. You could just get a new account, but reacquiring your Following would be a pain, and you’d lose all your tweets. Luckily, it’s very easy to update your handle. The problem is this opens some strange loopholes in the Twitterverse. If you want to protect your previous username, create a new account with a new email address, and grab your @OldName. Although all traces of mentions under your @OldName will have disappeared from your profile, they still linger in your “Notifications” tab. As you can see, even though changing your handle itself is rather easy, the alteration leaves a messy wake behind it.

Go Back to Top. Twitter will no longer crop photos on your Timeline. Are Your Blog Posts Optimized for Twitter Shares? 5 Vital Points to Check. By Guest Author Just look at these numbers: every second, on average, around 6,000 tweets appear on Twitter. 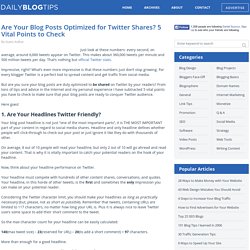 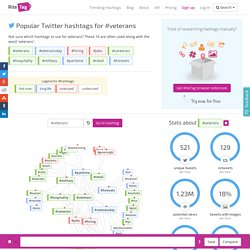 Hashtag Optimizer Tweet from the site, mobile apps or browser extensions and measure & refine the effectiveness of your hashtags. Hashtag Scanner. Fanbase - Development - Fanbase - Development. Twitter Reach Report Results for #chemguy. Conversion tracking for websites. Visit the new conversion tracking section of Twitter Ads, accessible via the Tools menu, to create, name, and generate the code snippet for one or more website tags. 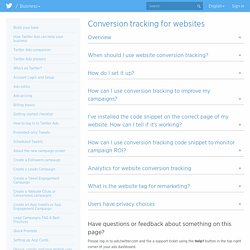 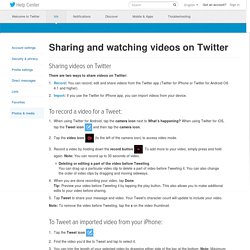 To record a video for a Tweet: When using Twitter for Android, tap the camera icon next to What’s happening? When using Twitter for iOS, tap the Tweet icon and then tap the camera icon.Tap the video icon (to the left of the camera icon) to access video mode. Note: To remove the video before Tweeting, tap the x on the video thumbnail. 7 Ways to Thank Someone for a Retweet. How to Get Leads on Twitter. A new way to optimize campaign performance with Twitter Ads. Since we launched Twitter Ads in 2010, advertisers have used Promoted Tweets and Promoted Accounts to connect with an engaged audience at precisely the right moment.

Over the last four years, we’ve analyzed thousands of Twitter Ads campaigns and identified best practices to help advertisers effectively achieve their marketing goals. Today, we’re excited to announce objective-based campaigns, reports and pricing. This will make it easier for advertisers to create and optimize successful marketing campaigns — and pay only for the actions that are aligned with their marketing objectives. Objective-based campaigns and pricing are now available in beta to SMBs and API partners globally, and we’ll be rolling this out to managed clients by invitation over the next few months. How to Track Twitter Hashtags. Sometimes, you need to track hashtags, for example, if you want to see whether twitterers are mentioning your company, brand, or event. People talk about you and your company on Twitter, although probably not as much as they discuss celebrity deaths or charges of election tampering.

The following websites enable you to track hashtags: Hashtags.org: A site that lets you see not only what’s trending that day, week, or month, but it also gives you a graphical representation of the frequency of tweets on the topic, who’s using hashtags, and even a count of how many times a hashtag is used. How to Find the Best Twitter Hashtags.

Real-time local Twitter trends - Trendsmap. Organizing the world's hashtags and hashtags information. Hashtagify.me - Search And Find The Best Twitter Hashtags - Free. How to Find Popular Hashtags on Twitter. How to get Twitter to give you a username held by someone else. Search 11,000,000+ hashtags.

Twitter accounts for roughly 9% of all social media shares, about a tenth of the amount of activity on Facebook, according to analysis by BuzzSumo and Frac.tl . YET Twitter’s contribution to lead generation and sales—marketers’ key metrics—ranks last in terms of being the initial, final or only social media platform touched, because its content and interaction occur in the middle of the purchase funnel, based on AOL Platform research (Chart). This makes Twitter’s contribution difficult to track. Many marketers just set up a Twitter strategy and leave it on autopilot. Unfortunately, this becomes a vicious circle for marketers because their efforts are insufficient to drive business. 6 Tips to Boost Your Twitter Conversations. Are you struggling to build an engaging Twitter community?

Do you want to lead relevant conversations, but aren’t sure where to begin? Standard auto-tweets aren’t going to cut it. Your top priority should be creating helpful, authentic interactions. In this article I’ll tell you six ways you can start Twitter conversations and keep your followers’ attention. Twitter Contest Checklist.pdf. Twitter Stats that Can Help Boost Engagement. Track These Twitter Cards Using the New Analytics Dashboard. Hashtagify.me - Search And Find The Best Twitter Hashtags - Free. How to Make Twitter In-Stream Images Stand Out. Linking to an individual Tweet.