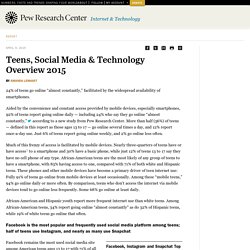 Aided by the convenience and constant access provided by mobile devices, especially smartphones, 92% of teens report going online daily — including 24% who say they go online “almost constantly,” according to a new study from Pew Research Center. More than half (56%) of teens — defined in this report as those ages 13 to 17 — go online several times a day, and 12% report once-a-day use. Just 6% of teens report going online weekly, and 2% go online less often. Much of this frenzy of access is facilitated by mobile devices. Nearly three-quarters of teens have or have access to a smartphone and 30% have a basic phone, while just 12% of teens 13 to 17 say they have no cell phone of any type. African-American and Hispanic youth report more frequent internet use than white teens. 71% of teens use more than one social network site. About Direct Messages. Twitter in Class & Staffroom. 500 Error: We're sorry, but something went wrong.

TweetDeck. How to Keep Safe on Facebook (with Cheat Sheet. Edit Article Facebook HelpKeeping Safe on Facebook Edited by Naslund001, Maluniu, OhioMike, Emma and 31 others Facebook is the fastest growing social networking site in the world today with up to 250,000 new users being added every day. 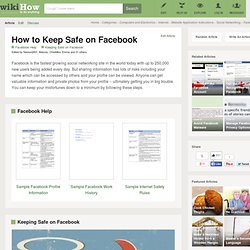 But sharing information has lots of risks including your name which can be accessed by others and your profile can be viewed. Anyone can get valuable information and private photos from your profile -- ultimately getting you in big trouble. Ad Steps Keeping Safe on Facebook 1These steps can help you separate the good people from the bad ones. 12Before clicking on a link from Facebook, always remember to check the address bar, which should always display "www.facebook.com/" and nothing else like "www.facebook33.tk" or "www.facebook1.php", etc. which is a giveaway of a phisher. Tips If someone is being intrusive or abusive remember you can always report and block them.If anyone seems to be harassing you on Facebook Chat, then don't hesitate to go offline. Marija Petreska: Swaying Tweets. By Marija Petreska Expert Educator Columnist, Republic of Macedonia So that your classroom is fully twitterized and your tweets are Swayed into a story, make sure all your students create twitter accounts. 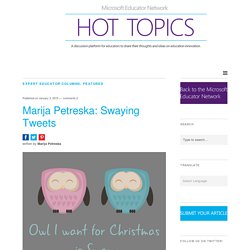 Be careful twitter is not for students under 13, so I suggest informing parents and school authorities before you start and an official consent on both sides is advisable. I’m an English language teacher so my ideas will go in that direction, but I’m sure you can all find something interesting, or that my ideas might grow into new ones you can use. 1. This first idea comes from a book called Meet the Marks This is an amazing way to teach punctuation. 2. This is an idea from my blog about teaching Present Simple tense and I thought why not Sway it. 3. Next they have to create their world and the rules in it. 10 Ways Teachers Can Make The Best of Twitter.

December 22, 2014 As a micro-blogging platform, Twitter has rapidly grown to widespread popularity due mainly to its unique features that set it apart from other social networking websites. 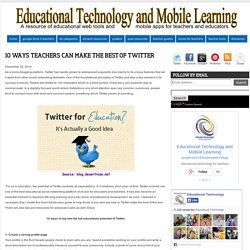 One of the foundational principles of Twitter and also a key element in its success is brevity. Tweets are limited to 140 characters which is a short portion of text yet a very powerful way to communicate. In a digitally focused world where distractions and short attention span are common currencies, people tend to connect more with short and succinct content, something which Twitter excels at providing. For us in education, the potential of Twitter exceeds all expectations. In a relatively short span of time, Twitter evolved into one of the best educational social networking platform of choice for educators and teachers. 10 ways to tap into the full educational potential of Twitter 1- Create a strong profile page Your profile is the front facade people check to learn who you are.