A Printable List of the Best Education Hashtags. Twitter is a popular and potentially useful way for educators to share ideas, best practices and other resources to improve teaching and learning in the nation’s classrooms — but only if they know how to find their way around. 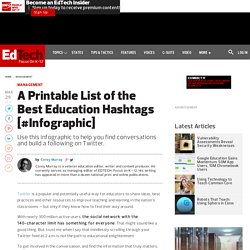 With nearly 300 million active users, the social network with the 140-character limit has something for everyone. That might sound like a good thing. But, trust me when I say that mindlessly scrolling through your Twitter feed at 2 a.m. is not the path to educational enlightenment. To get involved in the conversation, and find the information that truly matters, you have to learn the hashtags. You probably already know some of them. Below is a printable list of two dozen of the most popular education-related hashtags for K–12 and higher education. 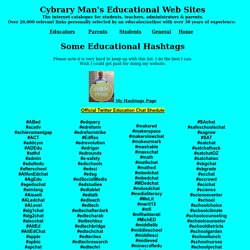 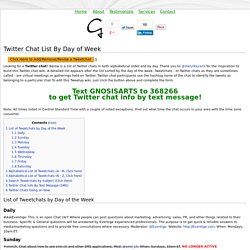 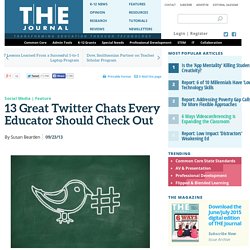 Twitter chats range from small discussions with only a few participants to huge conversations with dozens or even hundreds of educators taking part! They provide a unique opportunity for educators to discuss specific topics of interest and connect with colleagues around the world. The word from educators in the trenches is that these chats are making a profound difference in how educators are improving their professional practice, providing ideas, resources and inspiration in ways never thought possible. NAESP. Twitter 101: Understanding the Basics. Posted by Elizabeth Harper on May 17, 2013 in Tech 101, Computers and Software, Phones and Mobile, Mobile Apps, Android Apps, iPhone/iPad Apps, Windows Phone Apps, Guides & Reviews, Social Networking :: 1 comment If you're online—and reading this! 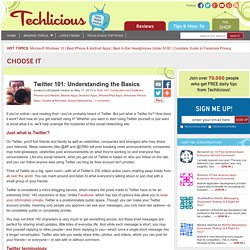 —you've probably heard of Twitter. But just what is Twitter for? How does it work? And how do you get started using it? Free Twitter 101 Tutorial at GCFLearnFree. Getting started with Twitter. 1,133 educational leaders to kickstart your Twitter feed  8 Tips to Create a Twitter-Driven School Culture. Author's Note: Thanks to Joe Manko, Liberty Elementary School principal, for inspiring this blog post during an impromptu edcamp at #SXSWEdu this year. 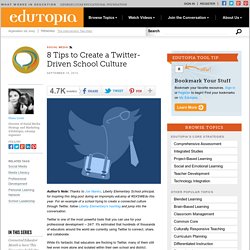 For an example of a school trying to create a connected culture through Twitter, follow Liberty Elementary's hashtag and jump into the conversation. Twitter is one of the most powerful tools that you can use for your professional development -- 24/7. It's estimated that hundreds of thousands of educators around the world are currently using Twitter to connect, share, and collaborate. While it's fantastic that educators are flocking to Twitter, many of them still feel even more alone and isolated within their own school and district. There's an unfortunate inverse trend I've noticed in education: the more connected you are on Twitter, the less support and collaboration you tend to have within your school. So I ask -- why can't we have both? Creating a More Connected Culture 1. 2. 3. 4. 5. Using Social Media: Tips for School Leaders. Thanks to its partnership with publisher Eye on Education, EducationWorld is pleased to present these administrator tips related to The School Leader's Guide to Social Media, by Ronald Williamson and J. 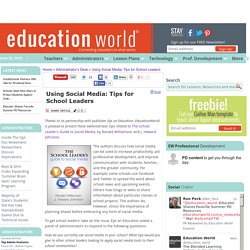 Howard Johnston. The authors discuss how social media can be used to increase productivity, aid professional development, and improve communication with students, families, and the greater community. For example, some schools use Facebook and Twitter to spread the word about school news and upcoming events. Others host blogs or wikis to share information about particular classes or school projects.

The authors do, however, stress the importance of planning ahead before embracing any form of social media. The 21st Century Principal: 4 Reasons Administrators Need to Get Connected with Twitter. 10 Tips for Using Twitter at Any Conference. The Complete Guide to Twitter Lingo. Here at Mashable, we live and breathe Twitter. 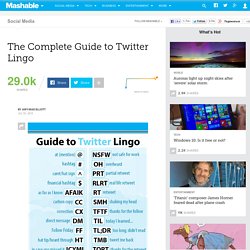 However, sometimes we see a tweet containing an acronym or an abbreviation with which we're not very familiar. If you find yourself in the same situation, then take a look through our handy list for a complete glossary of terms you may come across in tweets. While some abbreviations and acronyms may be common across all social media sites, others are unique to the microblogging platform. Browse our guide, and be sure to shout out any terms we've missed in the comments below. The "at" sign is used to mention another Twitter account (e.g., @Mashable). The hash (or pound) symbol is used to highlight keywords, topics, events or even emotions in a tweet. The caret, or hat sign, is used to denote a tweet composed and sent by an individual on behalf of a group account used by multiple people (often a company or organization) account. 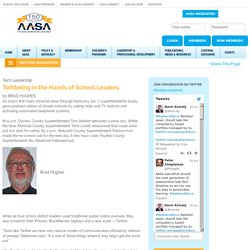 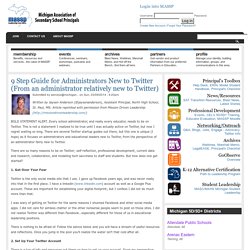 Paul, MN. Article reprinted with permission from Mission Driven Leadership ( BOLD STATEMENT ALERT…Every school administrator, and really every educator, needs to be on Twitter. This is not a statement I realized to be true until I was actually active on Twitter, but now I regret waiting so long. 10 Educators On Twitter You Should Follow (But Probably Don't) - If you’re already a teacher on Twitter, you know how useful it can be to connect with other educators and get the latest news in education.

If you’re not on Twitter you may think it’s just celebrities navel gazing while everyone else tweets pictures of their latest meal. Yes, there can be some of that, but there are also plenty of innovative teachers using Twitter to engage with like-minded people on a variety of education subjects. Utilizing Twitter Lists. I recently read the blog post, Twitter Snobs or Efficient Learners written by Bill Ferriter. In this post Bill states, "whenever the number of people that I'm following grows to more than 200, I simply get lost in the streams of information that come through my Twitter feed.

At that point, Twitter becomes useless, doesn't it? " Tweeting For Schools. Awhile ago, I wrote a post entitled, “What Should A Networked Educational Leader Tweet About? “, which was meant to be a guide to administrators new to Twitter on tweeting and sharing information using this social media tool. It is something that I am hoping all educators can use, but I obviously think that administrators should really understand the important use of social media in schools. As our own school division and schools all over the world are starting to use organizational Twitter accounts to connect, I wanted to write a post on how a school or educational institution can use Twitter effectively.

It is a great way to connect with students, as well as share their message locally and globally. 50 Global Edu Leaders You Should Follow On Twitter. Education is a constantly evolving organism, with individual humans and institutions making up the cells and organs that keep it running. Some are bad, some are neutral, and some ensure its very survival in ways minor and major. And social media outlets such as Twitter enable them all to keep this crucial discussion about a basic human right constantly flowing. Whether you agree with what the following leaders and leading resources included, they still exert influence over the education industry.

Give them a follow and use them to discover even more names and faces currently shaping schools across the world. Administrators and Researchers John Robinson: Principal John Robinson loves discussing both policies impacting public schools and education technology from an administrative perspective.Eric Sheninger: He didn’t win the NASSP Digital Principal Award this year because of his tech-fearing tendencies, that’s for sure!

7 Habits of Highly Effective Tech-leading Principals. Leadership | In Print 7 Habits of Highly Effective Tech-leading Principals By Jennifer Demski06/07/12 Patrick Larkin, principal of Burlington High School in Burlington, MA, started a 1-to-1 iPad initiative in the fall of 2012. The conventional wisdom in education is that any school reform--be it curriculum, instruction, assessment, or teacher professionalism--is most likely to take hold in schools that have strong leadership. The same holds true for technology. "The role of the principal is one of facilitation and modeling behavior," remarks Robert Farrace, senior director of communications and development with the National Association of Secondary School Principals.

T.H.E. We then spoke with three highly effective technology leaders among the ranks of principals to see how these habits have led to the successful implementation of educational technology in their schools. 1. National Principals Month: Top Twitter Accounts. Using Twitter for 24/7 Professional Development. Recently I shared the following article in our state administrators association monthly newsletter and thought it would be great to cross-post here. 10 Ways Principals Can Use Twitter to Enhance Stakeholder Engagement. Before I joined the Twitterverse, I was critical of its use and, quite frankly, was turned off by the concept all together. I often read and watched what seemed like ridiculous stories of what celebrities shared about their lives from the foods they ate, who they had lunch with, or whom they were dating. I saw no purpose for it all. However, all that changed about four years ago when my former district embarked on a digital journey. A Post for the Principals New to Twitter.

5 Ways Twitter Strengthens A School’s Learning Community. Cross-posted at eFACE Today. Connected Principals Have A Twitter Hashtag! It is amazing to see how quickly Principals from all over have jumped on board with this blog to help us all stay connected and learn more about what is happening at our schools. A Resource For All. Social Media for Administrators.

Meet Your New PD Tool. Tiffany Della Vedova entered the social media universe gradually. She started with ASCD EDge, an online community of some 33,000 administrators and educators where she still regularly blogs. NAESP. By Rosie O’Brien Vojtek Communicator November 2013, Volume 37, Issue 3 It’s Wednesday night, October 30, 2013. Game six of the World Series between the Red Sox and the St. Help Your Principals Become Twitter Advocates: ‘Opting Out Is No Longer an Option’ Evelyn McCormack Before March 2009, Eric Sheninger was “your typical school leader who felt that social media had no place in my personal and professional life.”

Sheninger, principal of New Milford (N.J.) Why Twitter? A Guide for School Principals by Simon Crook on Prezi. 3 Reasons Why the School Principal Needs to Tweet  I envision every school principal with smartphone in hand, anxious to send out the next tweet.