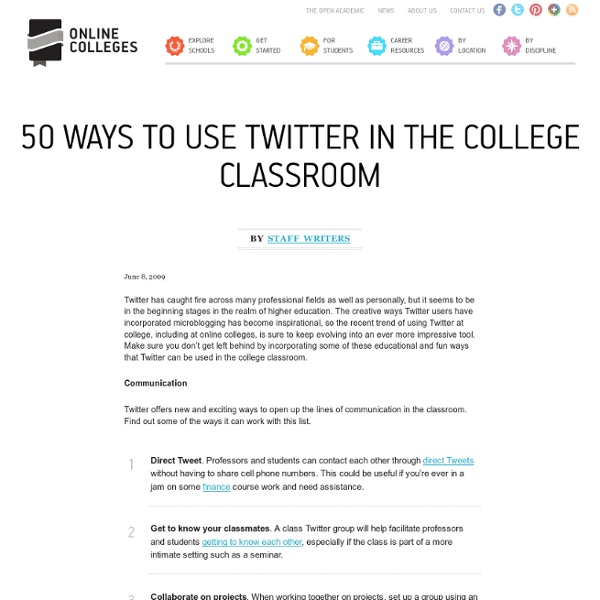 Twitter has caught fire across many professional fields as well as personally, but it seems to be in the beginning stages in the realm of higher education. The creative ways Twitter users have incorporated microblogging has become inspirational, so the recent trend of using Twitter at college, including at online colleges, is sure to keep evolving into an ever more impressive tool. Make sure you don’t get left behind by incorporating some of these educational and fun ways that Twitter can be used in the college classroom. Communication Twitter offers new and exciting ways to open up the lines of communication in the classroom. Find out some of the ways it can work with this list. Direct Tweet. Class Projects and Discovering Content From learning how to use Twitter to finding useful information for class to practicing a foreign language, Twitter provides creative opportunities for learning. Twitter-specific projects. Twitter Tools Twhirl. Finding People in Academia to Follow

localtweeps :: Help Localize The Twittersphere! :: Home In-Class Tweeting in a Large Lecture Class « The PR Post January 30, 2010 by Tiffany Gallicano With encouragement from Dawn Gilpin, I decided to introduce in-class tweeting to my class hashtag in my Media and Society class. Below is a slidecast I shared with the Teaching Effectiveness Program at the University of Oregon about my experiences with using in-class tweeting. I discuss benefits of in-class tweeting and recommendations for presenting in-class tweeting to students. As mentioned in the slidecast, I share a video with my students to open a discussion about Twitter and the importance of conversation. You can find the video I show here. Additional Resources 50 Ways to Use Twitter in a Large Lecture Classroom Tweeting in Class Live Tweeting Makes Learning More Lively Like this: Like Loading...

Musicians on Twitter: 100+ Artists That Tweet This post was co-authored by Cameron Chapman, who writes a blog at Cameronchapman.com and is @cameron_chapman on , and Alec Feld, who authors a blog at alecfeld.com and is @alecfeld on . As the industry changes, so have the methods by which music is promoted. Traditional marketing is being replaced by artists and bands using social media sites like Twitter to engage fans, promote their work, and connect with others. The modern web and the future of the music industry seem almost inextricably intertwined in terms of marketing, listening, communicating, and purchasing. Is your favorite artist tweeting? 50 Cent - Rapper 50 Cent posts tons of links, retweets content (mostly about himself) and updates very regularly. Adam Goldstein - Adam Goldstein, better known as DJ AM, tweets mostly about his music. Al Yankovic - Comedic singer Al Yankovic's tweets are usually funny, often giving some insight into his day-to-day life. Britney Spears - No introduction is needed for Britney. D.A. Hadouken!

News: Tweeting in Class DENVER — Do Twitter skeptics really believe the popular microblogging service offers no educational value, or are they just afraid of it? For W. Gardner Campbell, director of the Academy of Teaching and Learning at Baylor University, there is no question that fear of straying from the status quo has inhibited the development of Twitter as a teaching tool. “I go to conferences like Open Education 2009, and I come back with T-shirts like this: ‘Reuse, Revise, Remix, Redistribute,’ ” he said Wednesday at the annual Educause conference here. “And all it adds up to is more punishment at the hands of well-meaning, sometimes, but ultimately self-preserving institutional structures.” While some higher ed officials — including nearly everyone at Wednesday's debate between Campbell and Bruce Maas, CIO of the University of Wisconsin at Milwaukee — use Twitter for fun, many balk at the idea of incorporating it into the classroom. Interested in Technology Issues? It’s also a data-gathering resource.

Taking off the training wheels Home > Archive > 2009 > May > 19 Tuesday, May 19, 2009 by Dave Winer. Technology loops, it follows a pattern that repeats, and we're in one of those loops right now. Here's how it goes. 1. 2. 3. 4. 5. That's the loop. So then the question comes up, as we've been talking about now for years, what does the break-out from Twitter look like? So... I'm thinking now that Twitter is this -- A very low ramp onto blogging, which itself was a low ramp onto publishing. For a guy like me, who mastered blogging long ago, Twitter is compelling because of the people. Plus if you believe the loop model, the best of the Twitter users, the ones who are doing the most interesting stuff with it, they're going to want more, soon. Earlier today I twitted: "I like the open web so much I'm willing to accept its limits." Then a few hours later Larry Page hinted at the explosive breakout I'm looking for. 1. 2. 3. 4. 5. Just one little protocol to implement it. Oh happy day! "cheesecake" Recent stories

Education Week Teacher Professional Development Sourcebook: Teachers Take to Twitter Published Online: September 21, 2009 Published in Print: October 1, 2009, as Teachers Take to Twitter By Josh Cohen When Tom Barrett, a 4th grade teacher in Nottinghamshire, England, wanted to spice up a math lesson on probability, he didn’t turn to his department colleagues or a professional organization. Instead, he looked to the micro-blogging tool Twitter. Before class, he sent out a message to his followers on Twitter, asking them to report the chance of snow that day in their area. The responses came from Australia, Scotland, Korea, the U.S., and elsewhere, providing a variety of probability data to work with. “I was delighted to use this networking technology in this way and it was great to finally execute what I had long conceived to be possible in my head,” Barrett wrote on his blog, ICT in the Classroom. Barrett is not alone. Better than Google? Ferriter says Twitter has become a regular part of his planning process. • Begin by following people you already know and trust.

How Not to Tweet Every once in awhile, a library follows me on Twitter. When they do, I usually check out their Twitter feed (but rarely follow them). And every once in awhile, I see something like this . This isn’t “Pick on MSJLibrary Day” – I’m sure they’re a fine library, and I commend them for jumping into Twitter to figure it out. Named themselves with a form of their library’s name. Added a picture of their library Added a web link to their library website Their bio is great: “Helping You Research, Learn & Connect” Updates are locked/protected. Following the wrong people. I said their bio was great … but since they’re locked, it doesn’t make much sense – they can’t help you connect if you CAN”T connect! And I should say this – there’s nothing wrong with following me , CNN, ALA, or the National Geographic. Before you create an organizational account, do some planning and goal setting. What do you want to get out of it? Why are you setting it up? Who’s going to maintain the account?

Twitter for Beginners: 5 Steps for Better Tweeting Twitter is immensely useful as a utility for joining in the global conversation and sharing thoughts, opinions, information, and media. But for new users, there's also a fairly steep learning curve. For many people new to Twitter, the site doesn't immediately "make sense" and it can be a bit daunting. But there are things those users can do to make the service more useful from the get go. Below are five steps for new users to take in order to make the Twitter experience more enjoyable from the beginning. STEP ONE: Find People You Already Know I joined Twitter later than most early adopters, but once I finally became a Twitter newbie in early 2008, it was much easier to jump into the conversation when I was following some people I already knew — people who I was sure were already talking about things I was interested in and would value my input. Another way to find friends is to check out the Twitter Facebook app and see if any of your friends on Facebook are also on Twitter.