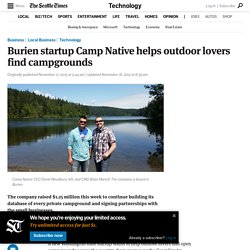 A new Washington state startup wants to help outdoor lovers find open campgrounds across the country, from spots near the Great Smoky Mountains to cleared lots in Pacific Northwest forests. Camp Native launched an online service six weeks ago that lets campers search and reserve campsites all over the U.S. The company raised $1.25 million this week to continue building its database of every private campground and signing partnerships with the small businesses. The funding came from angel investors and was led by BrokerBin, a computer wholesaler marketplace. Co-founder and CEO David Woodbury, an avid camper himself, was annoyed with emailing different campgrounds separately to find open sites or taking his chances by simply showing up. 9 Camping Tips for a Backcountry Thanksgiving Feast. For the outdoors enthusiast, Thanksgiving is an especially wonderful gift. 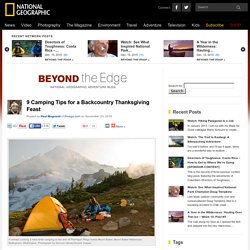 The four-day holiday weekend provides the opportunity for friends and family to enjoy a quiet campsite in a normally busy national park, get far into a canyon in red rock country, or perhaps ski to a secluded hut in the Colorado Rockies. For the past 15 years, I’ve been fortunate enough to spend almost every Thanksgiving somewhere memorable. Some of these holiday accommodations include a hidden spot under the stars while in Coyote Gulch, enjoying a mixture of sand and snow in the Great Sand Dunes National Park, watching a sunset while camped at Waterpocket Fold in Capitol Reef, and a memorable holiday spent skiing into a 10th Mountain Division Hut. 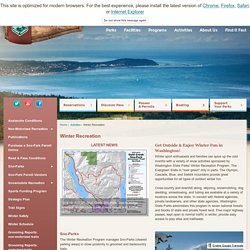 Visitors to Washington state parks and state recreation lands managed by the Department of Fish and Wildlife and the Washington State Department of Natural Resources are required to display the Discover Pass on their vehicles. Exemption: If you have a current seasonal Sno-Park permit, you will not need to purchase a Discover Pass to use a designated Sno-Park between November 1 and March 31 for winter recreation activities. However, your Sno-Park permit may not be used to access other state recreation lands. A Daily Dose of Ecotherapy Eases Stress in Kids. The English Have It Down. Hut Life Is the Best Life. Top 10 Winter Camping Tips To Help You Stay Warm. 1. 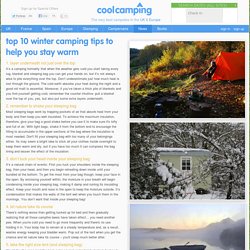 Layer underneath not just over the top It’s a camping formality that when the weather gets cold you start taking every rug, blanket and sleeping bag you can get your hands on, but it’s not always wise to pile everything over the top. Don’t underestimate just how much heat is lost through the ground. The cold earth absorbs your heat during the night and a good roll matt is essential. Moreover, if you’ve taken a thick pile of blankets and you find yourself getting cold, remember the counter intuitive: pull a blanket over the top of you, yes, but also put some extra layers underneath. Amazon.com : LifeStraw Personal Water Filter : Camping Water Filters : Sports & Outdoors. Top 10 Camping Movies. by Lakeshore RV Center. Tiny House Building Codes – The Tiny Life. It’s been a while since I did a post about how tiny houses deal with building codes, so today I wanted to share the top 5 myths about building codes, zoning and tiny houses. 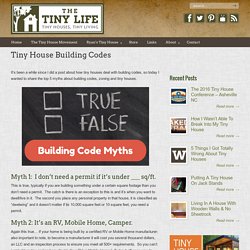 Myth 1: I don’t need a permit if it’s under ___ sq/ft. This is true, typically if you are building something under a certain square footage than you don’t need a permit. The catch is there is an exception to this is and it’s when you want to dwell/live in it. The second you place any personal property in that house, it is classified as “dwelwing” and it doesn’t matter if its 10,000 square feet or 10 square feet, you need a permit. Design Stack: Architecture in Tiny Home with a Lakeside View. Kelley Lewis decided to build her lake cabin at a difficult time in her life and the construction helped put things in perspective. 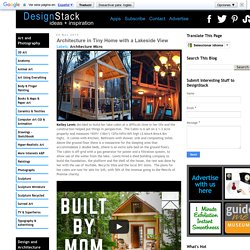 The Cabin is is set on a 1.3 acre property and measures 192ft² (18m²) 12ftx16ftx16ft high (3.6mx4.8mx4.8m high). It comes with Kitchen, Bathroom with shower, sink and composting toilet. Above the ground floor there is a mezzanine for the sleeping area that accommodates 2 double beds, (there is an extra sofa-bed on the ground floor). The cabin is off-grid with a gas generator for power and a filtration system, to allow use of the water from the lake. 10 Best Towing Vehicles That Aren't Trucks. Not everyone needs to haul a mountain from point A to point B - no matter what pickup advertisements might have you believe. 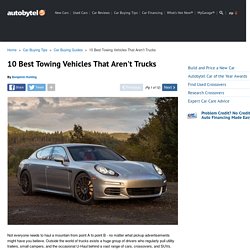 Outside the world of trucks exists a huge group of drivers who regularly pull utility trailers, small campers, and the occasional U-Haul behind a vast range of cars, crossovers, and SUVs. Occasional towing is the reason that a lot of people make the vehicle choices that they do, and a few thousand pounds difference between one automobile's rating and another's often weighs heavily when deciding what to buy. Let's take a quick look at 10 of the best towing vehicles that aren't trucks. 1) 2015 Chevrolet Traverse The 2015 Chevrolet Traverse is about as close as you can get in size to a big SUV without going over completely to a truck-based platform. 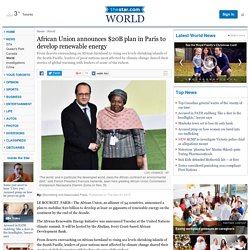 The African Renewable Energy Initiative was announced Tuesday at the United Nations climate summit. It will be hosted by the Abidjan, Ivory Coast-based African Development Bank. From deserts encroaching on African farmland to rising sea levels shrinking islands of the South Pacific, leaders of poor nations most affected by climate change shared their stories of global warming with leaders of some of the richest. Niall McLaughlin's Fishing Hut folds open to allow views through. A picturesque lake in Hampshire, England, is the setting for this fisherman's hut by Niall McLaughlin Architects, which can be opened up in summer and battened down in winter (+ slideshow). 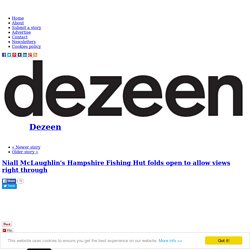 Named the Fishing Hut, the wooden structure provides a place for the client to his store boats and fishing tackle, but also functions as a shelter and meeting place for local anglers during the summer fishing season, between April and September. The intermittent use of the building provided the starting point for the design. McLaughlin – an Irish architect based in London – wanted the structure to be completely open to the elements when in use, but secure and weatherproof for the rest of the year. It achieves this through a facade of wooden shutters, which fold up to allow views right through the interior. Free Entrance Days in the National Parks. Fee-free days make national parks accessible to more people. 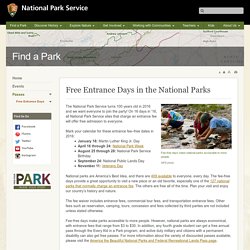 NPS photo The National Park Service turns 100 years old in 2016 and we want everyone to join the party! On 16 days in '16, all National Park Service sites that charge an entrance fee will offer free admission to everyone. Mark your calendar for these entrance fee–free dates in 2016: January 18: Martin Luther King Jr. Africa-Led Renewable Energy Project Receives Billions in Backing from International Community. Paris, 8 December 2015 - The ambitious Africa Renewable Energy Initiative (AREI), an African-led plan to add 10,000 MW of additional renewable energy on the continent by 2020, has received over $10 billion worth of backing from the international community at COP21. At an event on the sidelines of the Paris climate meeting, the European Union, Sweden and G7 jointly pledged $10 billion.