How To Create Groups and Lists on Twitter. HOW TO: Create Groups for Twitter. One of the most demanded features for Twitter has been the ability to create groups, allowing members to focus on different sets of people they're following. 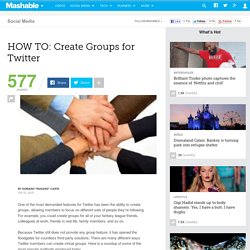 For example, you could create groups for all of your fantasy league friends, colleagues at work, friends in real life, family members, and so on. Because Twitter still does not provide any group feature, it has opened the floodgates for countless third party solutions. (Boulder,Colorado.USA. Edition) (user) Meemi. (user) Meemi. Who has the most Updates on Twitter? (Top 1000. Richard Lazzara Twitter Statistics.

How to use Twitter Favorites and Lists features. Twitter explodes over Verizon's 'share everything' plan. The social media universe was buzzing Thursday with reports that Verizon, on orders from a top secret court, has been handing over call data to national security officials. 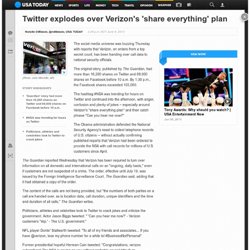 The original story, published by The Guardian , had more than 10,200 shares on Twitter and 69,000 shares on Facebook before 10 a.m. By 1:30 p.m., the Facebook shares exceeded 103,000. The hashtag #NSA was trending for hours on Twitter and continued into the afternoon, with anger, confusion and plenty of jokes – especially around Verizon's "share everything plan" and their catch phrase "Can you hear me now? " The Obama administration defended the National Security Agency's need to collect telephone records of U.S. citizens -- without actually confirming published reports that Verizon had been ordered to provide the NSA with call records for millions of U.S. customers since April. Politicians, athletes and celebrities took to Twitter to crack jokes and criticize the government. Welcome to Twitwheel! 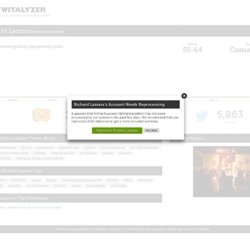 Subscribe to Twitalyzer and Track Multiple Accounts Subscribe to Twitalyzer today and you can track thousands of individual Twitter accounts! Automatic account processing on a daily (or hourly) basis Two dozen reports to help you understand your use of Twitter Full data export for all reports and many other ways to share And much, much more! Every Twitalyzer account starts with a free, no obligation, seven-day trial! 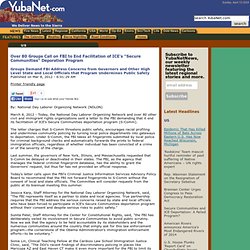 The letter charges that S-Comm threatens public safety, encourages racial profiling and undermines community policing by turning local police departments into gateways to deportation. Last summer, the governors of New York, Illinois, and Massachusetts requested that S-Comm be delayed or deactivated in their states. The letter is available at this link: Monsanto’s Blatant Corruption and Disregard for Health : Preparation and Electrical Properties of High-TC Piezoelectric Ceramics of Strontium-Substituted Bi(Ni1/2Ti1/2)O3–PbTiO3 - Kang - 2012 - Journal of the American Ceramic Society. New SmartCamera Developer's Kit features smallest, highest-performance imaging module with precision autofocus. Treaty of Guadalupe Hidalgo: A Living Document » Talking about Southwest Cultures - This post is the remarks given by Dr. 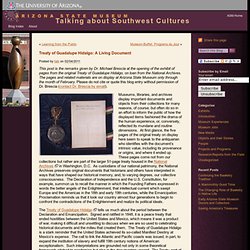 Michael Brescia at the opening of the exhibit of pages from the original Treaty of Guadalupe Hidalgo, on loan from the National Archives. The pages and related materials are on display at Arizona State Museum only through the month of February. Please do not cite or quote this blog entry without permission of Dr. Brescia (contact Dr. Bernie Sanders Pledges Legislation Ending 'Absurdity' of Federal Fossil Fuel Subsidies. Mark van Laere/CC BY-ND 2.0 We just learned, based on IEA calculations, if all fossil fuel subsidies were eliminated it would result in greenhouse gas emission cuts deep enough to get us halfway to preventing dangerous climate change. 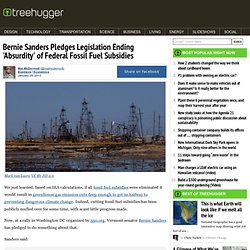 Indeed, cutting fossil fuel subsidies has been publicly mulled over for some time, with scant little progress made. Video: Electric Car From Japan Reaches Over 300KM Travel Range. We spent two posts on SIM-LEI, an electric car developed by a a spin-off startup at Keio University in Tokyo in collaboration with a total of 34 domestic and foreign companies, in the past months.

And it seems that the startup, SIM Drive Corporation, is on track to start mass-producing the vehicle in about 2 years. The company was set up in August 2009. The main selling point of the newest version is that it can drive over 300km at a constant speed of 100km/h. In spring, SIM Drive said the SIM-LEI (“Leading Efficiency In-Wheel motor”) can reach 333km under “general urban traffic conditions in Japan”. The new model is equipped with a 65kW/700 newton meter engine, an in-dash 19-inch display, and a set of side-view cameras. This video, shot by Diginfo TV in Tokyo, provides more insight: The 10 Big Stories You Missed In The Past Week. Richard Lazzara (shankargallery)

Related:  Conspiracies, more of them...   -  US of A and What You may Face   -  Police Handling Assembling & Demonstrations   -  Twitition - sign petitions using twitter   -  Twitvid   -  Monsanto’s Blatant Corruption and Disregard for Health :   -  Education   -  Enterprise