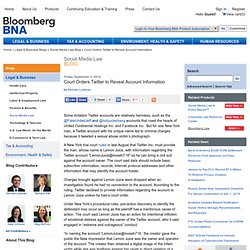 But for one New York man, a Twitter account with his unique name led to criminal charges because it tweeted a sexual abuse victim’s photograph. A New York trial court ruled in late August that Twitter Inc. must provide the man, whose name is Lemon Juice, with information regarding the Twitter account "LemonJuice@moseh718" so he can bring a civil suit against the account owner. Charges brought against Lemon Juice were dropped when an investigation found he had no connection to the account. Twitter To Suspend Accounts Of Anyone Tweeting Graphic Images Of Journalist's Alleged Execution. Rules for Social Media in Congress. By C. 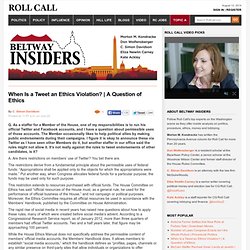 Simon Davidson Posted at 11:57 a.m. on July 22 Q. Possible 2016 Presidential Candidate Spends $14,000 on Twitter Ads. 57-year-old claims Twitter fired him over age and disability, files lawsuit. Peter Taylor, who managed Twitter’s data center expansion until he was terminated last September, claims the company let him go because of his age and because his treatments for kidney stones left him unable to perform additional duties. 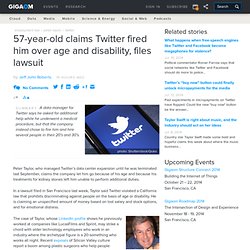 In a lawsuit filed in San Francisco last week, Taylor said Twitter violated a California law that prohibits discriminating against people on the basis of age or disability. He is claiming an unspecified amount of money based on lost salary and stock options, and for emotional distress. The case of Taylor, whose LinkedIn profile shows he previously worked at companies like LucasFilms and Sprint, may strike a chord with older technology employees who work in an industry where the archetypal figure is a 20-something who works all night. Recent exposés of Silicon Valley culture report a boom among plastic surgeons who help people appear young enough to fit in. FIFA Doesn’t Want To See The World Cup In Your Twitter Avatar. Mom fights Facebook over edited photo. On the Next Docket: How the First Amendment Applies to Social Media.

WASHINGTON — Just four years ago, the Supreme Court issued a hesitant and muddled decision in a privacy case, saying it was best to move slowly when ruling on an “emerging technology before its role in society has become clear.” 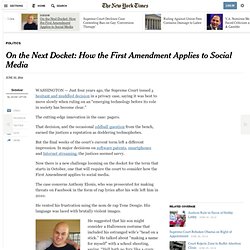 Lawyers given green light to scour jurors social media profiles before selection and during trial. American Bar Association rules it is ethical for lawyers to scour publicly available information when choosing jurorsMove will allow them to choose jury members that will be more sympathetic to their clientJudges have denied such behavior in the past By Associated Press Reporter Published: 18:18 GMT, 22 June 2014 | Updated: 07:18 GMT, 23 June 2014. 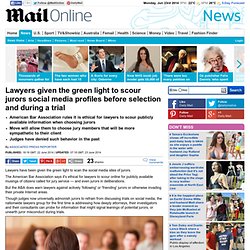 Court to examine Facebook threats. The Supreme Court on Monday agreed to hear arguments in a case over whether threats on Facebook count as actual threats. 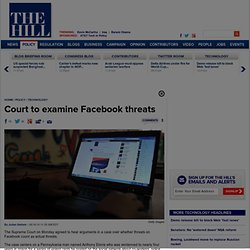 Social media posts could get Kansas university employees fired. The Kansas state attorney general approved a revised policy that states any employee at a public university in the state can be fired over improperly using social media, raising questions that their First Amendment rights are being infringed upon. 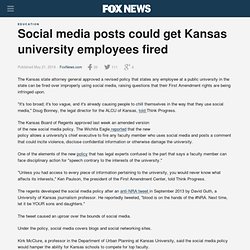 "It's too broad; it's too vague, and it's already causing people to chill themselves in the way that they use social media," Doug Bonney, the legal director for the ALCU of Kansas, told Think Progress. The Kansas Board of Regents approved last week an amended version of the new social media policy. The Wichita Eagle reported that the new policy allows a university's chief executive to fire any faculty member who uses social media and posts a comment that could incite violence, disclose confidential information or otherwise damage the university. 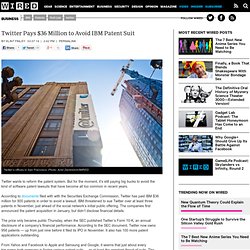 Photo: Ariel Zambelich/WIRED Twitter wants to reform the patent system. But for the moment, it’s still paying big bucks to avoid the kind of software patent lawsuits that have become all too common in recent years. According to documents filed with with the Securities Exchange Commission, Twitter has paid IBM $36 million for 900 patents in order to avoid a lawsuit. IBM threatened to sue Twitter over at least three patents in November, just ahead of the social network’s initial public offering.

Courtney Love tweets after Twitter trial win. How did Courtney Love celebrate her victory in a landmark Twitter libel case? 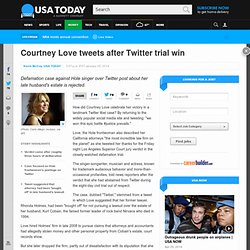 By returning to the widely popular social media site and tweeting: "we won this epic battle #justice prevails. " Love, the Hole frontwoman also described her California attorneys "the most incredible law firm on the planet" as she tweeted her thanks for the Friday night Los Angeles Superior Court jury verdict in the closely-watched defamation trial.

CBS Tests Twitter Rules By Placing Film Critic's Tweet In An Ad. On Saturday, the print edition of the New York Times carried a full-page ad for the movie Inside Llewyn Davis with a single tweet by A.O. 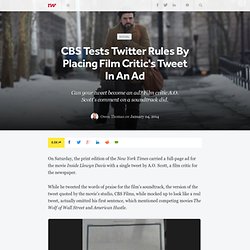 Scott, a film critic for the newspaper. While he tweeted the words of praise for the film's soundtrack, the version of the tweet quoted by the movie's studio, CBS Films, while mocked up to look like a real tweet, actually omitted his first sentence, which mentioned competing movies The Wolf of Wall Street and American Hustle. Courtney Love Libel Case May Prove There’s a Limit to Free Speech on Twitter. Is the "Like" Button Becoming a Constitutionally Protected Activity? On September 18, 2013, the Fourth Circuit Court of Appeals ruled that an employee's act of clicking the "Like" button on Facebook constitutes speech protected by the First Amendment.

This ruling signals an extension of constitutional protections deeper into the realm of social media, and should be noted by employers seeking to understand the legal limits to their ability to regulate employees in this relatively uncharted arena. The case, Bland v. B.J. With privacy battle brewing, Facebook won't update policy right away. New Jersey makes it illegal for companies to demand employee social media info. With Governor Chris Christie’s signature, New Jersey last week became the latest state to pass a law preventing companies from asking for social media user names, passwords, or other account info from employees. A New Media Shield Law Would Only Shield Corporate Media.

Image via Flickr Recently, Americans have witnessed a barrage of scandals regarding the federal government’s extension of their surveillance powers. Following whistleblower Edward Snowden's revelations—which of course point to the National Security Agency's spy programs and the FISA Court's endorsement of broad domestic-surveillance policies—the American citizenry's Fourth Amendment right to privacy has taken center stage. The truth of these invasive and unconstitutional policies is giving rise to further argument, and laying ground for a practical forum to engage elected officials to more clearly define citizens' rights in the digital era. Yet, while Americans are engrossed in the debate over whether or not their government should be allowed to collect and examine the online data of citizens en masse, particularly without suspicion of criminal activity, the vehicle by which these revelations came to light—journalism—is now also under attack.

@dellcam. Teen's Twitter boasts get charges upgraded to murder. Sadly, bragging is a natural impulse. But as with so many impulses, the more people you brag to, the more exposed you become to unexpected consequences. 18-year-old Cody Hall of Pleasanton, Calif., was arrested after allegedly hitting two cyclists with his car, killing one. Twitter could compete with traditional polls in future elections. According to researchers at Indiana University, the link between tweets and votes in political elections could be stronger than once thought. In a study analyzing 537 million tweets from August 2010 —the largest sample of tweets ever accessible to academic researchers — the percentage of votes for Democratic and Republican candidates in the House of Representatives race correlated with the percentage of tweets that mentioned them.

Tweets that got people arrested. Support, Follow Pending Legislation In House With Facebook-Based Cosponsor.gov. House Majority Leader Eric Cantor (R-Va.) announced the launch of Cosponsor.gov , a website and application based on Facebook that allows users to show their support for pending legislation in the House of Representatives. Users can search legislation by title, sponsor, or bill number, and track the status of legislation. Twitter Settles Spammer Lawsuit Case With TweetAdder - Mike Isaac - Social. Intro. Law Enforcement Rarely Uses Search Warrants in Getting Twitter Data.