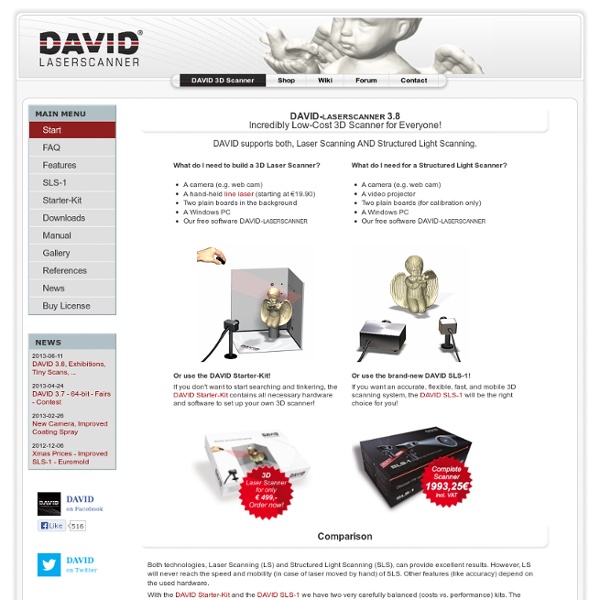 I'd like to see some results before buying or building anything! You will find some amazing results in our gallery. For laser scanning, you can download DAVID and use a test video file (choose Video Grabber) instead of a real camera, so you will have 3D data within a minute. More Questions? See FAQ (frequently asked questions) Gallery and User Gallery (with amazing 3D results) Downloads (software, example scans and test video) Shop (DAVID Scanner packages, cameras, lasers, and more) Manual (how to build and/or use your 3D scanner) Forum (exchange experiences with others) Wiki (tutorials and user impressions)

Face features detection with OpenCV Object detection proposed by Paul Viola was implemented in OpenCV. We also can find some classifiers (working with Haar-like features) in OpenCV such as frontal face, profile face, eyes, nose and mouth. Each classifier is trained with multiple sample views of a particular object in the same size including positive images and negative images. Printrbot jr assembly part 1 Finally got some time to work on assembling the actual printer. Started out with going through the LC parts to check if they were all there. Also snapped some photos of other components: printrbot Screws, nuts, etc. Nicely packed in sealed plastic bag. Reverse engineering software for 3D scanners Geomagic Design X (formerly Rapidform XOR) is the only reverse engineering software that combines history-based CAD with 3D scan data processing so you can create feature-based, editable solid models compatible with your existing CAD software. Generates history-based CAD models with feature treesConvert to your preferred file format, including SolidWorks, Creo, NX, Inventor, AutoCAD, CATIA and othersPoint cloud, mesh, surface and solid modeling all in one applicationComplements your CAD software by creating native models with feature trees – the most popular type of design modelsNamed “the only viable choice” for parametric reverse engineering in an independent study Geomagic Design X makes 3D scan data more useful All 3D scanners create point clouds or meshes, which aren’t that useful for most design needs. Geomagic Design X is purpose-built to create manufacturing-ready CAD models directly from scan data.

Advanced Vision Module [ Lecture Notes ] [ Announcements ] [ Assignments ] [ MATLAB ] [ Books ] [ FAQ ] 10 Minute Introduction The goal of this course is provide you with the skills to understand and sketch out solutions to a variety of computer vision applications. You should end up with the skills to tackle novel situations and incompletely defined applications. We will approach this by looking at 6 simplified computer vision systems that cover a large portion of the range of both applied and research computer vision. Lectures: 3-D scanning, with your smartphone Traditionally, 3-D scanning has required expensive laser scanner equipment, complicated software, and technological expertise. But MIT spinout Viztu Technologies helped change that: Back in 2011, Viztu released software, free online, that essentially replaced expensive scanning hardware with personal cameras. This innovation led to a rapidly rising commercial enterprise that concluded with Viztu’s sale to a tech giant, which is now bringing the technology to the public worldwide. Viztu’s flagship web service, Hypr3D, could rapidly generate digital 3-D models of an object (human or inanimate) or scene from a series of user-uploaded 2-D digital photos or videos, usually captured by digital cameras, smartphones, or webcams. “We gave people the easiest scanner available: the cameras they already owned,” says Thomas Milnes PhD ’13, Viztu’s chief technology officer, who developed the software behind Hypr3D as part of his MIT dissertation.

Naive Bayesian Tutorial in PHP » Quick PHP Code Tips and Examples May 16th, 2007 by Jon Moffet The practitioner of artificial intelligence and machine learning algorithm will recognize Naive Bayesian as one of the technique use to construct intelligent web application. Naive Bayesian is widely use as an intelligent classifier utilized to automatically classfies data based on statistical probability. Among the immediate use of Naive Bayesian technique is the classification of (spam) emails, medical diagnosis dan data pattern identification.

Image Classification (Photo or Drawing) using Weka Some time back, I was asked if there was a simple way to automatically classify images as either photographs or drawings. I had initially thought this would involve some complex image processing, but the idea presented in this paper - A Statistical Combined Classifier and its Application to Region and Image Classification (PDF) by Steven J Simske - shows that the problem can be reduced to something similar to a bag of words model commonly used in text classification. Consider the two images shown below. Clearly (to a human), the one on the left is a photograph, and the second is a chart (or drawing). The main thing that jumps out is how "soft" the color gradations are in the first one compared to the second. For ease of computation, we reduce the RGB values for each pixels to 256 grayscale values using the formula on this page.