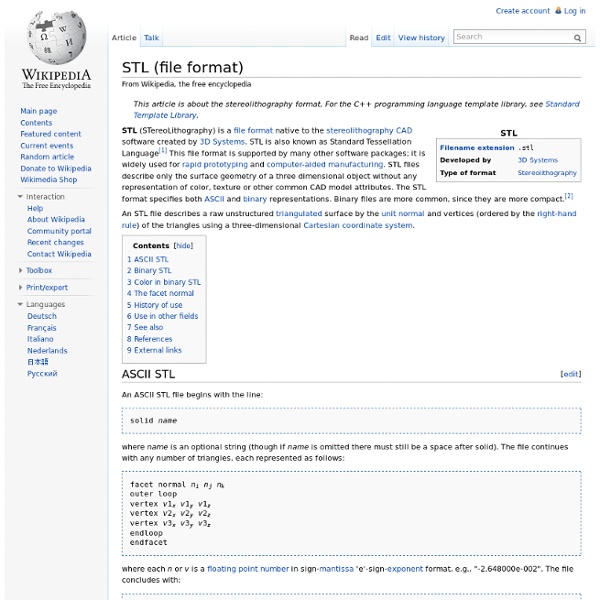 Example of STL vs CAD format STL (STereoLithography) is a file format native to the stereolithography CAD software created by 3D Systems. STL is also known as Standard Tessellation Language.[1] This file format is supported by many other software packages; it is widely used for rapid prototyping and computer-aided manufacturing. STL files describe only the surface geometry of a three-dimensional object without any representation of color, texture or other common CAD model attributes. The STL format specifies both ASCII and binary representations. An ASCII STL file begins with the line: solid name where name is an optional string (though if name is omitted there must still be a space after solid). facet normal ni nj nk outer loop vertex v1x v1y v1z vertex v2x v2y v2z vertex v3x v3y v3z endloop endfacet where each n or v is a floating point number in sign-mantissa 'e'-sign-exponent format, e.g., "-2.648000e-002" (noting that each "v" must be non-negative). endsolid name

JT (visualization format) JT is a 3D data format developed by Siemens PLM Software (formerly UGS Corp.)[1] and is used for product visualization, collaboration, and CAD data exchange. It can contain any combination of approximate (faceted) data, exact boundary representation surfaces (NURBS), Product and Manufacturing Information (PMI), and Metadata (textual attributes) either exported from the native CAD system or inserted by a product data management (PDM) system. It is probably the most widely used 3D visualization format for discrete manufacturing with over 4,000,100 JT-enabled licenses of software in use. JT files are used in product lifecycle management (PLM) software programs and their respective CAD solutions, by engineers and other professionals that need to analyze the geometry of complex products. Because JT files are inherently "lightweight" (~1-10% of the size of a CAD file) they are ideal for internet collaboration. The JT data model is capable of representing a wide range of engineering data.

RepRap Project RepRap version 1.0 (Darwin) RepRap version 2.0 (Mendel) First part ever made by a Reprap to make a Reprap, fabricated by the Zaphod prototype, by Vik Olliver (2006/09/13) The RepRap project is a British initiative to develop a 3D printer that can print most of its own components.[1] RepRap (short for replicating rapid prototyper) uses an additive manufacturing technique called Fused filament fabrication (FFF) to lay down material in layers; a plastic filament or metal wire is unwound from a coil and supplies material to produce a part. As an open design, all of the designs produced by the project are released under a free software license, the GNU General Public License.[2] History[edit] All of the plastic parts for the machine on the right were produced by the machine on the left. Version 2 'Mendel' holding recently printed physical object next to the driving PC showing a model of the object on-screen Video of RepRap printing an object RepRap 0.1 building an object 23 March 2005 Summer 2005

OpenFlight format flt The OpenFlight format is an defacto industry standard format in the visual simulation industry, developed by Multigen Paradigm Inc. (MPI) Here is the web link: The old OpenFlight plugin osgdb_flt is moved out of the core to the deprecated SVN directory structure. svn co deprecated To use the old plugin set the environment variable OSG_OPEN_FLIGHT_PLUGIN=old Option strings for OpenFlight reader ¶ Option strings for OpenFlight writer ¶ OSG was enhanced Q1 2008 to support FLT export. If you encounter any issues with the exporter, please post to osg-users and include the following info: .osg file for scene graph you are exporting OSG_NOTIFY_LEVEL=INFO output If a crash, include a stack trace A regression test suite is available to test FLT export in OSG. MultiGen, OpenFlight, and Flight Format are registered trademarks of MultiGen Inc.

PLY (file format) PLY is a computer file format known as the Polygon File Format or the Stanford Triangle Format. The format was principally designed to store three-dimensional data from 3D scanners. It supports a relatively simple description of a single object as a list of nominally flat polygons. A variety of properties can be stored including: color and transparency, surface normals, texture coordinates and data confidence values. The format permits one to have different properties for the front and back of a polygon. There are two versions of the file format, one in ASCII, the other in binary. A complete description of the PLY format is beyond the scope of this article - but one may obtain a good understanding of the basic concepts from the following description: The header of both ASCII and binary files is ASCII text. ply which identifies the file as a PLY file. format ascii 1.0 format binary_little_endian 1.0 format binary_big_endian 1.0 comment This is a comment! end_header

The Pirate Bay Rolls Out "Physible" Torrents For 3D Printers Turns out the government and Hollywood have been going after the wrong boogeymen the entire time! Pirating data and intangible information is so, like, 2011. While the World (Wide Web) held its breath during the Day The Net Went Dark and its lesser-known sibling, The Day MegaUpload Went Down, the notorious swashbucklers at The Pirate Bay introduced what they called "the future of sharing:" Physibles, or digital files that work with 3D printers to create real, physical objects. "We believe that the next step in copying will be made from digital form into physical form," Pirate Bay's blog declared. "It will be physical objects. Or as we decided to call them: Physibles. Our favorite: a 3D picture of MPAA chairman Chris Dodd over an AACS encryption key, or as the torrent puts it, "A crude little 3D printable portrait of a crude little man." What do you think: are Physibles the Next Hot Thing?

Wavefront .obj file OBJ (or .OBJ) is a geometry definition file format first developed by Wavefront Technologies for its Advanced Visualizer animation package. The file format is open and has been adopted by other 3D graphics application vendors. For the most part it is a universally accepted format. The OBJ file format is a simple data-format that represents 3D geometry alone — namely, the position of each vertex, the UV position of each texture coordinate vertex, vertex normals, and the faces that make each polygon defined as a list of vertices, and texture vertices. Vertices are stored in a counter-clockwise order by default, making explicit declaration of face normals unnecessary. OBJ coordinates have no units, but OBJ files can contain scale information in a human readable comment line. File format[edit] Lines beginning with a hash character (#) are comments. # this is a comment An OBJ file contains several types of definitions: Vertex positions (parameter space vertices)[edit] Face definitions[edit] 0.

Additive Manufacturing File Format Structure[edit] An AMF can represent one object, or multiple objects arranged in a constellation. Each object is described as a set of non-overlapping volumes. Each volume is described by a triangular mesh that references a set of points (vertices). These vertices can be shared among volumes. An AMF file can also specify the material and the color of each volume, as well as the color of each triangle in the mesh. Basic file structure[edit] The AMF file begins with the XML declaration line specifying the XML version and encoding. Within the AMF brackets, there are five top level elements. <object> The object element defines a volume or volumes of material, each of which are associated with a material ID for printing. Geometry specification[edit] The format maintains the triangle-mesh geometry representation used in the STL format in order to take advantage of existing optimized slicing algorithm and code infrastructure. Color specification[edit] Texture maps[edit] Print constellations[edit]

3D Systems Sues Formlabs and Kickstarter for Patent Infringement | Wired Design Formlab’s Form 1, the subject of 3D Systems’ lawsuit 3D Systems has announced it is bringing suit in Federal District Court against Formlabs and Kickstarter, seeking injunctive relief and damages for alleged infringement of a patent relating to how the startup’s light-based printer operates. 3D Systems v. Formlabs et. al. With the lawsuit, 3D Systems published a press release that states: “3D Systems invented and pioneered the 3D printing technology of stereolithography and has many active patents covering various aspects of the stereolithography process,” said Andrew Johnson, General Counsel of 3D Systems. 3D Systems is alleging that Formlabs is in violations of claims 1 and 23 of United States Patent No. 5,597,520 ”Simultaneous multiple layer curing in stereolithography.” Like the MakerBot, the Form 1 was designed around patents that were thought to have expired. Update: Details of the specific patents listed in the lawsuit have been added. Photos courtesy of Formlabs

Magic number (programming) In computer programming, the term magic number has multiple meanings. It could refer to one or more of the following: A constant numerical or text value used to identify a file format or protocol; for files, see List of file signaturesDistinctive unique values that are unlikely to be mistaken for other meanings (e.g., Globally Unique Identifiers)Unique values with unexplained meaning or multiple occurrences which could (preferably) be replaced with named constants The format indicator type of magic number was first found in early Seventh Edition source code of the Unix operating system and, although it has lost its original meaning, the term magic number has become part of computer industry lexicon. In Version Seven Unix, the header constant was not tested directly, but assigned to a variable labeled ux_mag[4] and subsequently referred to as the magic number. Magic numbers are common in programs across many operating systems. Some examples:

The latest threat to 3D printing: stupid, broad patents If you’re a 3D printing pioneer with a focus on innovation, patents are probably the last thing on your mind. And that could be your undoing. While lots of experts have argued that our current patent system is almost irrevocably broken across all industries, it poses a particular problem for young ones like 3D printing. Why? It’s a big problem, but fortunately organizations like the Electronic Frontier Foundation (EFF) are paying attention to it.”We don’t want the 3D printing industry to become a minefield of patent holders going after tinkerers. While overly broad patents aren’t too much of an issue for 3D printing now, it won’t be long until the industry grows to the point where it makes financial sense for patent holders to start suing growing 3D printing companies. To avoid this fate, the EFF asked a bold, albeit slightly tough question: How do we figure out which patents are the most overreaching and could pose the most trouble down the line?