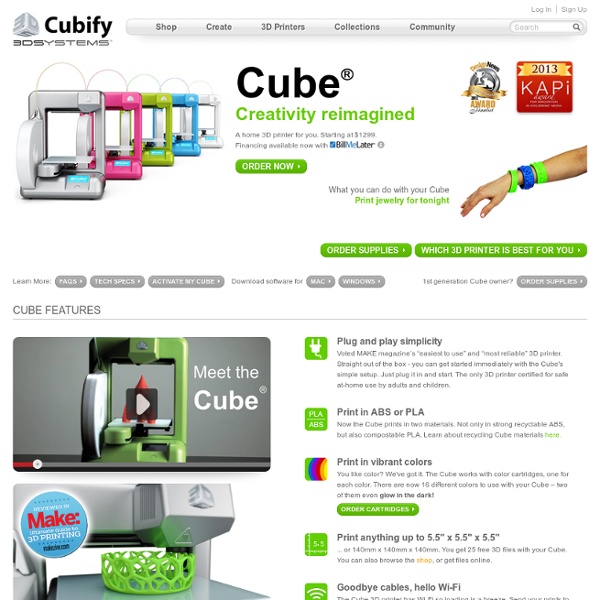 Form1 - Kickstarter Are you frustrated that low-end 3D printers don’t have the quality to make the true beauty of your designs real? Do you dream of having the power and resolution of a truly professional machine on your desktop? We’ve created an easy-to-use system that rivals the output of high-end printers at a fraction of the cost. Our reason for starting this project is simple: there are no low-cost 3D printers that meet the quality standards of the professional designer. As researchers at the MIT Media Lab, we were lucky to experience the best and most expensive fabrication equipment in the world. But, we became frustrated by the fact that all the professional-quality 3D printers were ridiculously expensive (read: tens of thousands of dollars) and were so complex to use. We’ve been hard at work for over a year, and with your help, we’re ready to take the Form 1 into full-fledged production. We’ve gone to extraordinary lengths to design a complete 3D printing experience: They look like this: Spiffy, eh?

3D Printers & 3D Production Systems | Stratasys Products The Stratasys Idea Series levels the playing field by bringing professional 3D printers to individuals and small teams, accelerating creativity. Making the leap to world-class 3D printing at such a low cost is a revolution on its own. If you’ve ever taken a 3D prototype for a test spin before production, you already know its impact. Cut turnaround time and increase quality by building prototypes right under your own roof with Stratasys Design Series 3D printers. Rethink the factory from the floor up. The Stratasys Production Series is built to streamline manufacturing while maximizing your possibilities — handling the largest prototypes and accurate low-volume parts with agility. Because Stratasys believes the future of dentistry is digital, we’ve designed a 3D printing solution for almost every dental need. Learn about 3D Printing 3D printing is a way to create physical objects directly from digital files. Technologies

Form 1 - article TechCrunch The Form 1 3D printer, which you may recognize from Kickstarter, has topped $1.4 million in pre-orders in just under a week on the crowd-funding platform. With nearly 1,000 backers already, the FormLabs team has sold out of all their early-bird pledge packages, so anyone who backs the project now is only ahead of the official website sale shipments. Mad Kickstarter success always comes down to demand. Disrupt runner up gTar walked away with 3x its funding goal because it made learning the guitar fun and easy. Pebble took home a whopping $10 million after finding the perfect balance between smart watch functionality, beauty, and battery drain. The Form 1 is no different. There’s a massive gap, and Form 1 aims to fill it. I caught up with co-founder Maxim Lobovsky (once again) to ask about momentum. Lobovsky tells me that FormLabs is being as realistic as possible with quantity.

Eventorbot Eventorbot! Open source 3D printer.The Mission and challenge behind Eventorbot, was to build a rigid, low cost 3d printer. Using less parts, easy to assemble, and is capable to self replicate most of its parts. It is 100% open source project, and all plans are available for anyone interested. Facebook page for updates and more images: Link to download plans and build from scratch (If you are pledging for parts on kickstarter, please only use this link for build): Tutorial videos: Video of eventorbot printing and its print quality: Behind Eventorbot.My name is Duy, from IL, USA. 3d printer? Open source? Future attachments/upgrades, because Eventorbot is open source there will be more then you can imagine. Update : Eventorbots current print size is 8"x10"x6"After many request, it is now official. Update: (1) About 5 feet of 3mm filament. Hotbed Upgrade!

Printrbot: Your First 3D Printer by Brook Drumm I designed the Printrbot to be the simplest 3D printer yet. There are some great kits out there - the Makerbot, the Ultimaker, the Prusa Mendel, and others - but none as small and simple as the Printrbot. This all-in-one 3D printer kit can be assembled and printing in a couple of hours. Other kits will not only take you many more hours to build, they will also have hundreds more parts, and they will cost more. My design also does away with the finicky calibration and adjustment from which most 3D printers suffer. The Printrbot is my original design, but borrows from many great designers in the open source 3D printer world (check out reprap.org). Pictures of the Printrbot: Video of the Printrbot: More Info: printrbot.com Being a true RepRap means you will immediately be able to upgrade and modify the machine with parts you print yourself.