40 Maps They Didn’t Teach You In School 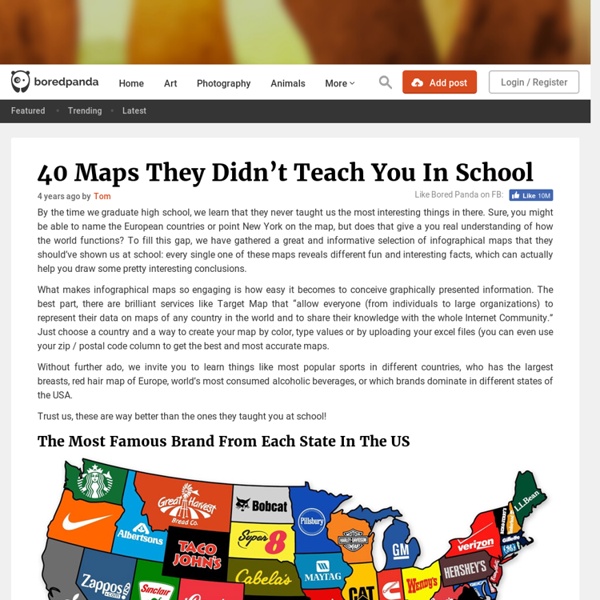 By the time we graduate high school, we learn that they never taught us the most interesting things in there. Sure, you might be able to name the European countries or point New York on the map, but does that give a you real understanding of how the world functions? To fill this gap, we have gathered a great and informative selection of infographical maps that they should’ve shown us at school: every single one of these maps reveals different fun and interesting facts, which can actually help you draw some pretty interesting conclusions. Show Full Text What makes infographical maps so engaging is how easy it becomes to conceive graphically presented information. The best part, there are brilliant services like Target Map that “allow everyone (from individuals to large organizations) to represent their data on maps of any country in the world and to share their knowledge with the whole Internet Community.” Trust us, these are way better than the ones they taught you at school!

12 'No Nose' GIFs That Will Delight and Horrify You Remember when Grandpa would steal your nose as a kid? For the children who didn't get their honkers back, there's a place for them on Internet. The subreddit r/nonose/ features hilariously horrifying photos and GIFs that, as the name suggests, have no noses. Don't worry, people with weak stomachs, the de-nose-ification is done with the wizardry of Photoshop. We sniffed out 12 of the funniest (and most frightening) no nose GIFs for your eyeballs' pleasure. The most liberal and conservative big cities in America, in one chart Even the most conservative cities in America are barely right of center, as this great chart from the Economist, based on research from Chris Tausanovitch at UCLA and Christopher Warshaw at MIT, shows: It's no surprise that most big cities are left of center, as the Pew Research Center points out. What's interesting is how liberal even the median big city is. Cincinnati, for example, hangs around the center of big cities' political spectrum, but the Economist's chart shows it's still fairly liberal. For another look at the liberal and conservative towns and cities each state, check out this map from Business Insider:

Big History Project Join us! The Big History Project is not a for-profit program. Your engagement will exclusively benefit teachers and students around the world. Teaching the course It's easy to teach Big History — all you have to do is register, set up a class, and go! Start a pilot 40 Maps That Will Help You Make Sense of the World If you’re a visual learner like myself, then you know maps, charts and infographics can really help bring data and information to life. Maps can make a point resonate with readers and this collection aims to do just that. Hopefully some of these maps will surprise you and you’ll learn something new. A few are important to know, some interpret and display data in a beautiful or creative way, and a few may even make you chuckle or shake your head.

A Real Map of the Middle East Could this map be any more different from the previous one discussed on this blog? That one dealt with the water, wetlands and shifting shorelines of Louisiana. This one zooms in on lines in the sand of the Middle-Eastern desert. Yet both maps do something similar: knowing that our current maps no longer reflect reality, they replace their conventional wisdom with a new cartography, based on the new facts on the ground.

You Can't Do Binary Under Pressure Click your answer, or use the Q or P keys on your keyboard. You can also type Q or P to continue. Answer by clicking, or with Q and P. stumbleupon Climate scientists tend not to report climate results in whole temperatures. Instead, they talk about how the annual temperature departs from an average, or baseline. They call these departures "anomalies." The Shape of Life This relatively obscure series (2002) is a real find. 7 hour long episodes tell the story of primarily invertebrates of the sea (sponges, anemones, flatworms, molluscs, arthropods, jellyfish, sea stars, etc...) over the course of time and how we relate and in some cases depend on these seemingly lowly creatures. Amazing video footage and computer graphics clearly explain everything. The scope of the video is worldwide. This is documentary film-making at its best. It's a shame it's not more widely known because it is easily as good as (better than, IMHO) PBS/BBC documentaries on the same subject. It covers the evolution of life on earth by explaining the gradual changes in anatomy (invertebrates to vertebrates, etc).

New York Public Library Puts 20,000 Hi-Res Maps Online & Makes Them Free to Download and Use When I was a kid, my father brought home from I know not where an enormous collection of National Geographic magazines spanning the years 1917 to 1985. I found, tucked in almost every issue, one of the magazine’s gorgeous maps—of the Moon, St. Petersburg, the Himalayas, Eastern Europe’s ever-shifting boundaries. I became a cartography enthusiast and geographical sponge, poring over them for years just for the sheer enjoyment of it, a pleasure that remains with me today. Whether you’re like me and simply love the imaginative exercise of tracing a map’s lines and contours and absorbing information, or you love to do that and you get paid for it, you’ll find innumerable ways to spend your time on the new Open Access Maps project at the New York Public Library.

Global inequalities in population, wealth, and religious origin shown in six maps. This map of Canada shows the country's familiar vastness. A single line drawn across its deep south adds a surprising layer of information. The line runs well below the 49th parallel that constitutes that long straight stretch of U.S.-Canada border from Point Roberts, WA to Lake of the Woods, MN (see also #519). Split in two by the U.S. state of Maine poking north, the line traverses four eastern provinces, cutting off the southern extremities of Ontario, Québec and New Brunswick.