Should you have a Chief Data Officer/Chief Narrative Officer? By Kim Reid, Principal Analyst For years, higher education has been called data-rich and information-poor. 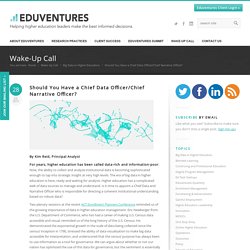 Now, the ability to collect and analyze institutional data is becoming sophisticated enough to tap into strategic insight at very high levels. The era of big data in higher education is here, ready and waiting for analysis. Higher education has a complicated web of data sources to manage and understand. Is it time to appoint a Chief Data and Narrative Officer who is responsible for directing a coherent institutional understanding based on robust data? Exploring High-End Visualization for Research and Education. 2015 Innovators Awards Exploring High-End Visualization for Research and Education Georgia State University created a technology-rich visualization space that supports research and instruction and explores the transformative potential of visual media across all disciplines. 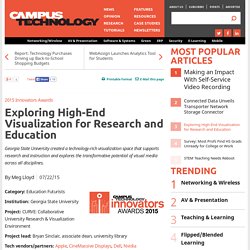 Even if you’re not a baseball fan, there is a good chance you’ve heard of Moneyball. 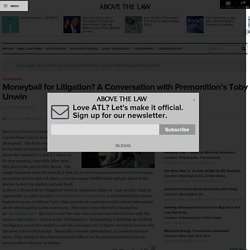 The term originally referred to the book written by Michael Lewis about the Oakland A’s, but it’s taken on its own meaning, especially after Brad Pitt played the part of Billy Beane. The simple takeaway from Moneyball is that (in my best business school voice) by focusing on certain metrics and not others, you can expose inefficiencies and get ahead of the market before the market corrects itself. Data, Startups And Doing Things That Matter. Prominent voices in tech journalism are criticizing the global startup community for building software products and services that cater to the 1 percent or have zero societal value. 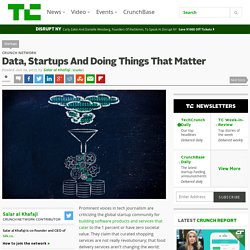 They claim that curated shopping services are not really revolutionary; that food delivery services aren’t changing the world; and that ridesharing is nice but not exactly earth-shattering. And, clearly, building ways to sell more ads adds nothing to the global karmic bottom line. Everything about Silicon Valley is a lie. Seldon - Open Source Machine Learning for Enterprise. Premonition - uses artificial intelligence, predictive analytics. The current state of machine intelligence 2.0. A year ago today, I published my original attempt at mapping the machine intelligence ecosystem. 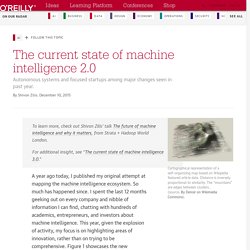 So much has happened since. I spent the last 12 months geeking out on every company and nibble of information I can find, chatting with hundreds of academics, entrepreneurs, and investors about machine intelligence. This year, given the explosion of activity, my focus is on highlighting areas of innovation, rather than on trying to be comprehensive. Figure 1 showcases the new landscape of machine intelligence as we enter 2016: Despite the noisy hype, which sometimes distracts, machine intelligence is already being used in several valuable ways. The two biggest changes I’ve noted since I did this analysis last year are (1) the emergence of autonomous systems in both the physical and virtual world and (2) startups shifting away from building broad technology platforms to focusing on solving specific business problems. 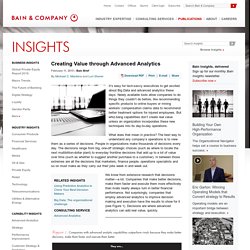 Companies that make better decisions, make them faster and execute them more effectively than rivals nearly always turn in better financial performance. Not surprisingly, companies that employ advanced analytics to improve decision making and execution have the results to show for it (see Figure 1).