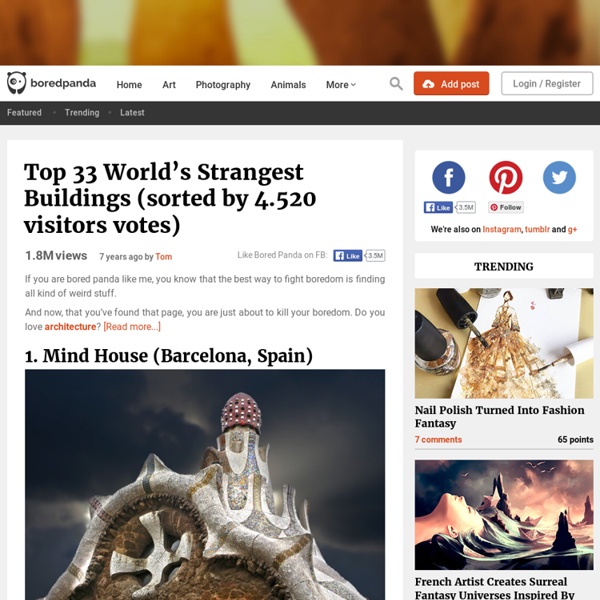 If you are bored panda like me, you know that the best way to fight boredom is finding all kind of weird stuff. And now, that you’ve found that page, you are just about to kill your boredom. Do you love architecture? Strangebuildings.com has a wonderful collection of the world’s most unusual architecture and together with Bored Panda presents you an incredible list of 33 strangest buildings in the world, and best of all, it’s not just another random list, but it is based on 4.520 unique visitor votes. Well enough of those boring talks, prepare your hand for scrolling down the list, while bored panda eats another bamboo leaf. P.S.: if you want to find out more information about the building (date it was built, architect, interior shots) don’t forget to visit Strangebuildings.com. 1. (Bamboo leaf for angelocesare via www.boredpanda.com) 2. (Bamboo leaf for brocha via strangebuildings.com) 3. (Bamboo leaf for Jsome1 via strangebuildings.com) 4. 5. 6. 7. 8. 9. 10. 11. 12. Thanks for sharing!

Aluna: World's First Tidal Powered Moon Clock 50+ More Unusual Buildings Architecture After getting so many quality feedback on one of our past post over 80+ Strange and Fantastic Buildings Architecture It’s necessary to write this post about More Unusual Buildings Architecture as a quality addition to respective topic. As it’s very transparent that Architectural works are perceived as cultural and political symbols and works of art. Historical civilizations are often known primarily through their architectural achievements. Cities, regions and cultures continue to identify themselves with (and are known by) their architectural monuments. We are lucky to exist in a revolutionary generation where we have a chance to see pattern braking Architectural achievements by modern blood. When Modern architecture was first practiced, it was an avant-garde movement with moral, philosophical, and aesthetic underpinnings. The approach of the Modernist architects was to reduce buildings to pure forms, removing historical references and ornament in favor of functionalist details. 01. 02.

10 Of the Most Unusual Homes in the World Moving into and setting up your new home is definitely one of the most exciting things – especially for those who never find enough outlets for their ideas and designs. Throughout history, people have gone from caves to huts to castles to blocks of flats – and nowadays, seems like you can find an example of just anything. Some people are forced to get creative because of some physical restrictions – like small or unusual space – while others do so just because. If you feel like you could use some inspiration to design your future home – or just like checking out the weird ideas some people have – this post is just for you! 1. Inspired by our ancient predecessors, who inhabited trees, this completely transparent “House NA” in Japan offers you a lot of day light, but not much privacy. Designed by: Sou Fujimoto Architects 2. The Skateboard House allows you to skate on all the surfaces, both in and outdoors, and was planned to be built in Malibu. Designed by: Pierre Andre Senizergues 3. 4.

20 Tree House Pictures: Play-Club Plans to Big-Kid Houses « Dornob Treehouses are more popular than ever, as play spaces for children but also as luxury hotel (and even house) designs for adults. Some of the most fantastic plans and ideas can be traced to specialist designers and builders – and pictures of their work can provide some of the best inspiration (as well as an informal visual guide) for do-it-yourself recreational, residential and commercial tree buildings. Blue Forest is one such company, but far from the only one. Their specialty seems to lie somewhere between playful little fantasy structures and big educational spaces for children engaged in wildlife observation, forest ecology and related nature-oriented pursuits. The trick is to find a balance between safe and fun – railings are a must, as are sturdy supports, but whimsy and asymmetry help make these places feel more organic and engaging for younger visitors in particular. Some are like mansions, fortresses or castles – just set up on stilts instead of sitting on the ground.

Ripley's Branson Odditorium Avoids Tornado -- Not That You Can Tell There are many unbelievable items at the Ripley's Believe It Or Not! Odditorium in Branson, Mo., including a full-size stagecoach made of toothpicks and the world's largest ball of twine. Yet, what visitors find most unbelievable is how the building managed to narrowly avoid a tornado on Wednesday, according to FairCityNews.com. Gary Daily, who has managed the Odditorium since 1999, says the tornado came within 40 feet, but did not touch the building. Not that anyone can tell. RIPLEY'S GALLERY (Story continues below) Loading Slideshow Kathy Hayes' ToenailsLos Angeles-based anthropologist Kathy Hayes has toenails that are five inches long. "The building was erected in 1999 to look like it had been hit by an earthquake that hit another part of the state in 1812," Daily told HuffPost Weird News. The Odditorium was not touched by the tornado, but Branson visitors are forgiven if they mistakenly think the Ripley's building was the one hit. "It's interesting watching people go by," Daily admitted.

10 Amazing Examples of Architecture Inspired by Mathematics The link between math and architecture goes back to ancient times, when the two disciplines were virtually indistinguishable. Pyramids and temples were some of the earliest examples of mathematical principles at work. Today, math continues to feature prominently in building design. We’re not just talking about mere measurements — though elements like that are integral to architecture. Thanks to modern technology, architects can explore a variety of exciting design options based on complex mathematical languages, allowing them to build groundbreaking forms. Take a look at several structures past the break that were modeled after mathematics. Mobius Strip Temple You probably made a Mobius Strip in grade school math class, so you should remember that the geometric form is unique in that there is no orientation.

Space Saving Tiny Apartment, New York | Interior Designs And Home Ideas This tiny but highly sophisticated studio apartment in the East Village of NYC has made us very proud, thanks to JPDA. Not only was it built as a super efficient multi-functional unit but with the use of detailed mill work, the storage capacity was very cleverly executed and resulted in a super stylish studio with a decent amount of floor space. Shouldn’t all NYC dwellers aim to live like this? You decide… A schematic rendering demonstrates a realistic plan for this tiny apartment. Although we’re not too sure how realistic that cubbyhole at the crown of the loft is in a NYC apartment building, the rest of the space makes perfect sense. This tiny living/work space is beautifully masked with natural light and looks so inviting! This mezzanine bedroom is constructed with beautiful teak wood that houses hidden storage compartments… What great use of typically neglected storage space…. Well lit and highly efficient modern kitchen has beautiful appliances and plenty of counter space.

Crazy & weird building designs Posted on March 15, 2012 in Bizarre If you’re new here, you may want to subscribe to our RSS feed or follow us on Facebook or Twitter . Thanks for visiting! Rate this Post Loading ... So... Check this out on our Partner Network Patterns in nature Natural patterns form as wind blows sand in the dunes of the Namib Desert. The crescent shaped dunes and the ripples on their surfaces repeat wherever there are suitable conditions. Patterns in nature are visible regularities of form found in the natural world. These patterns recur in different contexts and can sometimes be modelled mathematically. Natural patterns include symmetries, trees, spirals, meanders, waves, foams, arrays, cracks and stripes.[1] Early Greek philosophers studied pattern, with Plato, Pythagoras and Empedocles attempting to explain order in nature. In the 19th century, Belgian physicist Joseph Plateau examined soap films, leading him to formulate the concept of a minimal surface. Mathematics, physics and chemistry can explain patterns in nature at different levels. History[edit] Belgian physicist Joseph Plateau (1801–1883) formulated the mathematical problem of the existence of a minimal surface with a given boundary, which is now named after him. Causes[edit]

10 Most Unusual Mountain Huts | Weirdly Odd - Top Weird,Odd and Cool lists You have embarked on a climb in the toughest, most challenging spot of land; mountains. You want to live the nature, experience the raw feeling but it is inevitable that a time will come when you wish for a hot cup of cocoa, a crackling fire, the comfort of a roof four walls, and no wind. 10. At a height of 4,003 meters on a rocky ridge of the Matterhorn, Switzerland’s iconic, triangular peak, is the Solvay hut, managed by the Swiss Alpine Club. 9. Since 1983, the Rifugio Nuvolau has been a refuge for exhausted trekkers, providing comfort and solace to those trudging in Italy’s dramatic Dolomite Mountains. 8. If you don’t feel like staying at the Solvay Hut, Matterhorn can offer you a roof at the Hornli Hut. 7. Here is a place, the French, Swiss and Italians can all enjoy. 6. Trekkers, skiers and climbers will be relieved to find Refuge des Cosmiques (3,613m), on the incline in France, positioned a bit carelessly amidst the fascinating ski village of Chamonix. 5. 4. 3. 2. 1.