SHOW®/WORLD - A New Way To Look At The World 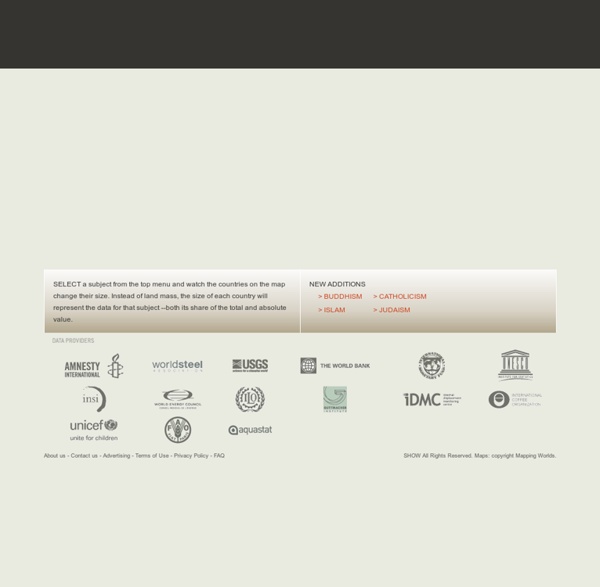 40 maps that explain the world By Max Fisher By Max Fisher August 12, 2013 Maps can be a remarkably powerful tool for understanding the world and how it works, but they show only what you ask them to. So when we saw a post sweeping the Web titled "40 maps they didn't teach you in school," one of which happens to be a WorldViews original, I thought we might be able to contribute our own collection. Some of these are pretty nerdy, but I think they're no less fascinating and easily understandable. America Revealed Over the past century, an American industrial revolution has given rise to the biggest, most productive food machine the world has ever known. In this episode, host Yul Kwon explores how this machine feeds nearly 300 million Americans every day. He discovers engineering marvels we’ve created by putting nature to work and takes a look at the costs of our insatiable appetite on our health and environment. For the first time in human history, less than 2% of the population can feed the other 98%. Yul embarks on a trip that begins with a pizza delivery route in New York City then goes across country to California’s Central Valley, where nearly 50% of America’s fruits, nuts and vegetables are grown and skydives into the heartland for an aerial look of our farmlands.

OECD Better Life Initiative Average personal index for Germany, men, 15–24 How’s life? There is more to life than the cold numbers of GDP and economic statistics – This Index allows you to compare well-being across countries, based on 11 topics the OECD has identified as essential, in the areas of material living conditions and quality of life. Download executive summary Download the index data Learn more about the index 40 Maps That Will Help You Make Sense of the World If you’re a visual learner like myself, then you know maps, charts and infographics can really help bring data and information to life. Maps can make a point resonate with readers and this collection aims to do just that. Hopefully some of these maps will surprise you and you’ll learn something new. A few are important to know, some interpret and display data in a beautiful or creative way, and a few may even make you chuckle or shake your head. If you enjoy this collection of maps, the Sifter highly recommends the r/MapPorn sub reddit.

Puerto Rico Considers “Fat” Tax on Obese Children: A Fight for Children’s Health or a Tax Collection Scheme? It seems that the Puerto Rico government is scrambling to find ways to collect tax revenues to satisfy its debt obligations. Why? Well there is a new controversial “Fat” tax bill filed by Puerto Rican Senator Gilberto Rodriguez to combat child obesity. The plan calls for school teachers to identify and locate obese children and refer them to the Puerto Rico health department officials. TerraClues TerraClues is the ultimate Google Maps scavenger hunt game! Follow clues to find hidden locations on the map Create your own hunts for others to play A fun game that makes you think! Add your own unique clues. Take people on a hunt around the world. Test your friends knowledge with world trivia.

Timeline of Major Events & Trends on Datavisualization Peter von Stackelberg designed this complex timeline of social, technological, economic and political events and trends from 1750 to 2100. Each time series shows graphs, events and categories on a common scale. The purpose of the timeline is to provide a visual tool for looking at events across a relatively long period of time and identify patterns and interrelationships involving a broad range of factors. Identification of patterns is particularly important when attempting to look at the future of complex social, technological, economic, and other systems. Some thoughts behind the design process.Stephen Lark uploaded a zoomable version to Zoomorama

Top 25 Informative Maps That Teach Us Something Uniquely Different About the World Population of Southeast Asia Compared to the Rest of the World Maps can be great guides for more than just finding routes for traveling. They often provide insight on the rest of the world. Taking a look at certain maps can be incredibly informative, especially when comparing the standing of countries in relation to one another. In fact, many passionate cartographers take pride in creating maps that present relevant knowledge through a visual medium. Whether they're on topics concerning population density, educational level, or even a gauge of internet usage across the world, each serves a purpose of sharing data to enlighten minds.

FUdiet: The Science of Weight Loss, Nutrition, and Fitness One piece of diet advice I dole out on a regular basis is, “if you love to eat, don’t drink your calories!” The reason I discourage people from drinking calories is because beverage calories tend to be easier to give up and some people consume so many calories from soda that if they cut back, they could probably eat more food and still save calories. I have actually seen patients with a 2+ a day soda habit lose 5-10 pounds from making the one simple change of kicking the soda habit. Sugar-sweetened beverages which include sodas, fruit drinks, and other soft drinks have no nutritional value. Even the vitamins in juice are not worth the calories, especially when sugar or high-fructose corn syrup is added.

Walmart Dwarfs Entire Industries And Nations Walmart is always good for destroying your faith in humanity on Black Friday, and this year was no exception: By day’s end, reports emerged from stores across the country of biblical struggles over waffle makers, pepper-spraying, and even at least one shooting. Maybe if shoppers took a closer look at Walmart’s business doings they wouldn’t be so willing to whip out legal airborne torture for a bargain Xbox. Or maybe they would, I don’t know. Still, what Frugal Dad has strung together in Weight of Walmart above, has to give even the most hardened Black Friday criminals pause. The Map Of Native American Tribes - kplu Finding an address on a map can be taken for granted in the age of GPS and smartphones. But centuries of forced relocation, disease and genocide have made it difficult to find where many Native American tribes once lived. Aaron Carapella, a self-taught mapmaker in Warner, Okla., has pinpointed the locations and original names of hundreds of American Indian nations before their first contact with Europeans. As a teenager, Carapella says he could never get his hands on a continental U.S. map like this, depicting more than 600 tribes — many now forgotten and lost to history.

Inhabitat - Green Design, Innovation, Architecture, Green Building When I saw this fascinating New York Magazine article on skyscraper farming, my first thought was of a much younger and geekier version of myself, who used to play SimCity 2000 a lot on my pc. Towards the end of the game, you’d be able to get an Arcology, that is, a self sustainable building, capable of providing food, water, and energy to the inhabitants of the complex. As I’m fond of saying, you just can’t beat reality these days. The tools for setting up skyscraper farms have long been in existance, and with growing urban populations and increasing demand for food, the reality of skyscraper farming may soon be upon us… The New York Magazine article describes the work of Dr. Dickson Despommier, a professor of environmental sciences and microbiology at Columbia University.

Infographic Of The Day: Cellphone Calls Reveal The United States's Invisible Ties The lines between states and even countries are pretty arbitrary: The ties you have with people 50 miles away aren't going to be too-much affected by some imaginary line drawn up 200 years ago. What if you could remap the United States -- not by geography, but rather social ties? MIT's Senseable City Lab has done just that, by analyzing mobile-phone calling patterns across the country.