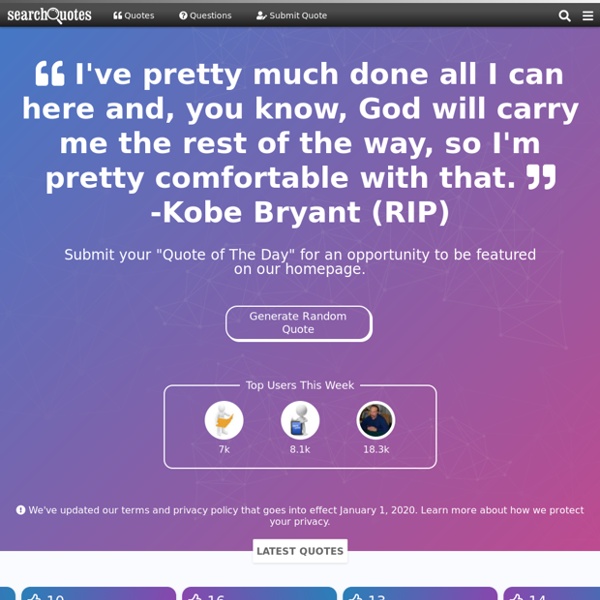 To keep moving forward in life it is a must that we keep a continual attitude of positivity, and excellence. Keep a smile on your face, even in the most trying of times. Keep being yourself as well. Many times when life gets us down, all we desire for is some normalcy after tragedy. During these difficult times we must remember to fully engage in life, and to live to reach and surpass our potential, we have to continue to be ourselves and no one else. Doing so will lead to the ultimate happiness, and is the only way to truly be fulfilled.

Ancient Quotes And Quotations Quotes from Ancient Times What the rich and famous and wise said Thoughtful and attentive words to contenplate learn from Note: Throughout history the rich, famous and wise have said things that have been recorded in the form of quote.s It is the study of these quotes that give insight into life. Solomon (died c. 930 BC),Â king of the ancient Hebrews and son of David As the lily among thorns, so is my love among the daughters. As the apple tree among the trees of the wood, so is my beloved among the sons. Lycurgu (fl. c. 850 BC), Spartan semi-mythical law-giver There thou beholdest the walls of Sparta, and every man a brick.

musée numérique de l'image fixe à l'image animée August 28, 1955 Fourteen-year-old African-American Emmett Till is brutally murdered after reportedly flirting with a white woman while visiting relatives in Mississippi. For the first time, both black and white reporters cover the trial epitomizing "one of the most shocking and enduring stories of the twentieth century." Internet Archive Paying Employees in Bitcoin, Asking for Donations The Internet Archive, one of the most widely known nonprofit organizations in the internet community, has just announced that they intend to start paying a portion of their employees’ salaries in Bitcoin. The Archive describes itself as “a non-profit digital library offering free universal access to books, movies & music, as well as 267 billion archived web pages”, and is most well-known for two key projects. First, the Archive maintains the Wayback Machine, a service that allows anyone to access old versions of web pages, including potentially web pages that have since disappeared from the internet, from as far back as 1996.

Desiderata 1976 edition of The Desiderata of Happiness poetry collection "Desiderata" (Latin: "desired things") is a 1927 prose poem by American writer Max Ehrmann. Largely unknown in the author's lifetime, the text became widely known after its use in a devotional and after spoken-word recordings in 1971 and 1972. History[edit] Go placidly amid the noise and haste, and remember what peace there may be in silence. As far as possible without surrender be on good terms with all persons.

sIBL Archive Installation Each thumbnail links directly to an archived sIBL-set. Watch out, these are big downloads. Click to download, then expand the zip achive as a folder and place the folder in your sIBL-Collection. Starter's sIBL-Collection 1,100 Green Berets set record straight on guns Text smaller Text bigger Politicians, pundits and private citizens have been sounding off on Barack Obama’s new push for gun bans, but what do the professionals whose job it is to use guns in the protection of their nation, their fellow countrymen and themselves say? Watch out. An open letter has been posted on the Professional Soldiers blog that has been signed as of this writing by more than 1,100 current and former U.S. Army Special Forces soldiers, the Green Berets.

The Whole Soy Story with The Naughty Nutritionist Pumping Up Cheerios with a Little Soy Protein . . . and a Lot of Sugar Cereal sales have been slumping and so have sales of soy. What to do? If you are General Mills, you come up with a “breakfast option” that promises to “deliver long-lasting energy with taste that kids can enjoy.” That new product is Cheerios Protein. The word “protein” in the product name is no accident. Wellness Words of Wisdom May 27th, 2013 The fountain in the center of campus is dry, lifeless. It’s almost October. The inscription at the base of the fountain reads, “In Memory of a Beautiful Life.” It commemorates Mary Tomlinson Lanning, Class of 1912, a sophomore who died much too young from typhoid fever. It brings me to wonder, What is a beautiful life?

Samoa to Skip Friday and Switch Time Zones The time change, officially decided in June, is meant to align Samoa with its Asian trading partners; it moves the islands’ work days further from the United States, which dominated its economy in the past. In this giant-step version of daylight saving time, the island’s 186,000 citizens, and the 1,500 who live in Tokelau, will go to sleep on Thursday and wake up on Saturday. The government has decreed that those who miss a day of work on Friday will be paid all the same. Samoa has been out of alignment with its Asian-Pacific neighbors since 1892, when American traders persuaded it in 1892 to shift from the western side to the eastern side of the international date line to facilitate business with the West Coast of the United States. That earlier shift took place on the American Independence Day — so the Samoans could celebrate July 4 twice. This one takes place at the stroke of midnight, so that two minutes after 11:59 p.m. on Dec. 29, it will be 12:01 a.m. on Dec. 31.

Promoting Sustainable Agriculture Consumers are paying a high cost for substandard, cheap factory food. The following links are working on different areas but all have the same goal - to support sustainable agriculture. There are far too many groups to mention here (apologies to those we missed). Be sure to find local sustainable agricultural groups in your area as many of them hold extremely informative annual meetings where you can meet local farmers. Depending upon your area of interest, familiarize yourself with any or all of the following links. If you are concerned about the quality of the food you are buying at the grocery store, some of the following links will help guide to healthier more humane choices through local farms.

Quote magnets Q: I enjoyed hearing Pat discuss quote magnets last month on WNYC. I have a favorite Mark Twain quote, and I’d like to know whether it’s genuine: “If you always tell the truth, you don’t have to remember anything.” A: We can’t find any evidence that Mark Twain ever wrote this. We can’t find it in any of his works, and the Internet websites that say he wrote it don’t say where. If you can’t look something up to verify it at the source, it’s probably not true. the founding story — 100CAMERAS. 100cameras was co-founded by four women in 2008 on the premise that a child sees the world differently than adults.They believed a child could take a camera into their own community and capture stories of the world around them in ways an older or outside photographer could not. And they were confident these stories could change lives, both within the community and around the world. In late 2008, the concept was first tested when one of the friends went to South Sudan and gave cameras to kids at an orphanage. The photos that returned were remarkable. In a hard place that most would call hopeless, these images told a different story: one full of life, hope, and joy.

Barefoot Myths, Lies... and TRUTH. Free Video Series. Learning to run barefoot isn’t hard. Find a nice smooth, hard surface. Take off your shoes. Go for a short run. See how you feel the next day.