History of migration to Australia 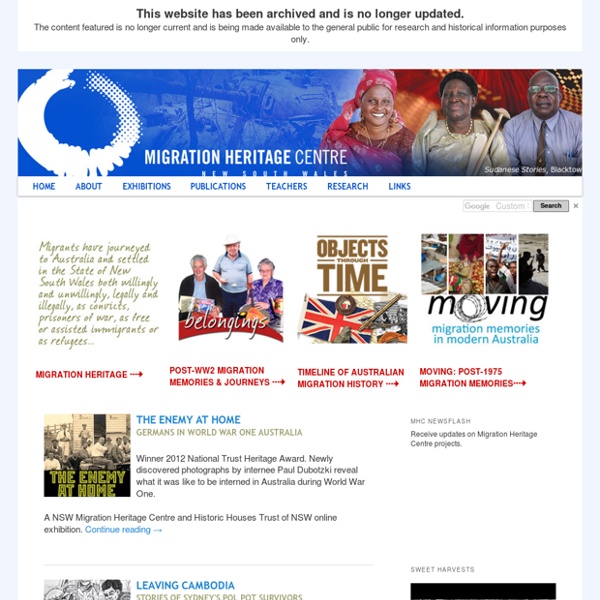 1840 – 1900 | Australia's migration history timeline | NSW Migration Heritage Centre Circular Quay, Charles Percy Pickering, 1871. Courtesy State Library of New South Wales By 1869, there were six colonies in Australia – New South Wales, Tasmania, Western Australia, South Australia, Victoria and Queensland – all settled by British people. These separate colonies all had their own governors, parliaments and systems of government reporting to Britain. As the interior was explored and mapped, squatters and free settlers followed and Aboriginal people were pushed from their homelands. Governments wanted to protect Aboriginal people from settler violence. The discovery of gold sent a shock wave through Colonial Australia. Chinese in Lambing Flat riots, December, 1860. Chinamen at work on the gold fields. Immigrant ships brought thousands of people keen to try their luck at the diggings. The Chinese diggers moved from goldfield to goldfield within New South Wales and across the border. Samuel Sweet, Overland telegraph party, J.A.G.

Websites Everyday life In 19th century Melbourne free land was scarce, housing was a problem, and when times got tough, people turned to alcohol. Those who watched the city grow tell the story of how the streets were named, when the first brewery appeared, and how a woman got by in a man's world. The witty observations of an Irish journalist tell the real story of life in Port Phillip. Hard times and economic woes made the lure of alcohol all too tempting for Melbourne's common folk. After some initial problems, Melbourne's city grid became an iconic feature of a rapidly growing town. Melbourne's population in the 1800s reflected the city's growth as a bustling metropolis. Melbourne's city street names link directly to the story of colonial life in Port Phillip. Almost since their arrival, settlers had felt strongly that Port Phillip deserved to be a separate colony. Female convicts and free settlers were a small but important part of Port Phillip's development.

Migration Experiences ~ GOLD ~ The gold rush transformed a former convict colony into a first choice destination for free emigrants. Europeans, North Americans, South Americans, Indians, Chinese and Africans were among the thousands who answered the call of Australian gold. As an experiment in multiculturalism however, the gold fields were a failure. Fear and hatred of the Chinese miners led to violence and eventually, legislation to restrict their numbers. Often forgotten in gold rush history, Indigenous Australians were also greatly affected by the influx of migrants and the loss of land and culture. The immigration rush Hundreds and thousands of hopeful diggers rushed to Australia and transformed the population. Multicultural gold fields Diggers from all over the world created Australia’s first truly culturally diverse society on the gold fields. The New Gold Mountain Thousands of Chinese headed to Australia in search of fortune. Anti-Chinese riots and rorts Fear and hatred of the Chinese soon escalated to violence.

The Boat People The Bounty System Your browser does not support script The Bounty System Extracted from the:- "Concise Guide to State Archives of New South Wales" Few free settlers were attracted to the penal colony of New South Wales during the first thirty years of its existence, despite the free passages, land grants and other incentives offered at various times during this period. As settlement spread and the proportion of emancipists and native-born increased during the 1820s, however, immigrants began arriving in greater numbers. With increasing prosperity came a growing demand for skilled labour, and the Government responded to this need (and to the problem of the great numerical inequality between the sexes) by introducing a number of assisted immigration schemes from 1832 onwards. The first of the assisted migration schemes began in 1832 when eight single women and eight mechanics and their families left England aboard the "Marianne". In 1847, the second Bounty system of immigration was set up. 1. 2. 3. 4. 5. 6.

Browsing by theme 'Migration Collection' - Museum Victoria The Migration Collection provides an overview of the many and diverse people who have migrated to Victoria since the 1830s, their motivations for coming, the material they brought with them, items accumulated on the journey, and the objects they made and acquired after settling here. This material is varied and includes personal effects, domestic and work-related items, clothing and other textiles, luggage, shipboard souvenirs, photographs, art and craft works, and personal and immigration documents. The growing collection of documents relating to Australian immigration policy and promotion, and the processes by which people are selected, managed and organised, provides a critical bridge between the personal narratives and the narratives of nations - Australia's and others. Scope of existing collectionThe collection consists of around 6,000 items relating to individuals, families, communities and organisations. Acquisition is primarily by donation. Significant items:

Exiles and Emigrants: Epic Journeys to Australia in the Victorian Era Start >> Browse through a set of 13 letters between members of the Wingfield family, dated from the mid to late 1800s. This small sample gives a unique insight into the importance of postal communication in Victorian times. Topics include birth, illness, death, the terrible effects of mass unemployment, a proposal of marriage and more. These letters were generously provided by descendants of the Wingfield family. Photo: Eva Wingfield dressed as 'Eve', c.1910