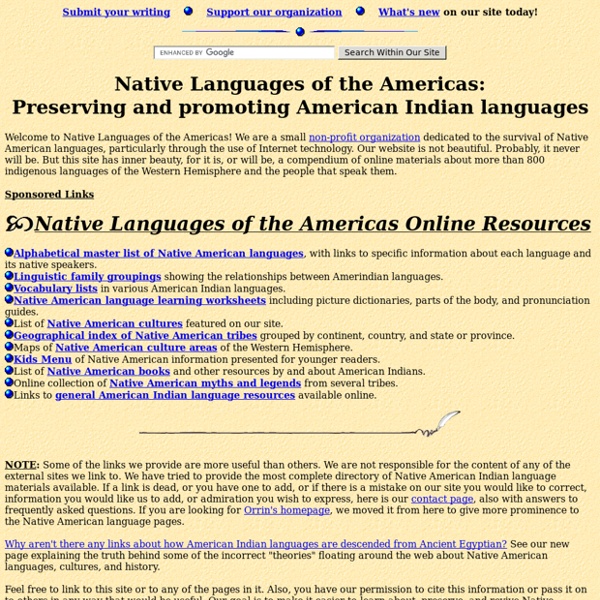 Submit your writing Support our organization What's new on our site today! Welcome to Native Languages of the Americas! We are a small non-profit organization dedicated to the survival of Native American languages, particularly through the use of Internet technology. Our website is not beautiful.

The Red Book of the Peoples of the Russian Empire In the cliché-ridden propaganda of the Soviet era tsarist Russia was frequently dubbed the “prison of nations”. When the Soviets came into power this “prison”, by virtue of new national policies, transformed into a family of friendly and brotherly nations in whose bosom all the national cultures flourished. To boast of the achievements under the Communist Party leadership, grandiose cultural festivals were arranged in the Soviet republics, folkloristic dance, song and instrumental groups were established and the revival of old peasant culture was encouraged.

List of languages by time of extinction This is a list of extinct languages sorted by their time of extinction. When the exact time of death of the last remaining speaker is not known, either an approximate time or the date when the language was last being recorded is given. However, the list is not complete. Language Trainers USA Blog Source: muturzikin.com I stumbled upon this fascinating site recently – muturzikin.com – the webmaster of which draws linguistic maps displaying different languages and dialects across continents. I always knew that there were plenty of different American English dialects across our country, but I didn’t expect quite so much detail on a map of the USA.

Lists of endangered languages In order to be listed, a language must be classified as "endangered" in an academic source quoted. SIL Ethnologue (2005) lists 473 out of 6,909 living languages inventorized (6.8%) as "nearly extinct", indicating cases where "only a few elderly speakers are still living"; this figure dropped to 6.1% as of 2013.[1] In order to judge if a language is endangered, the number of speakers is less important than the age distribution; There are languages in Indonesia reported with as many as two million native speakers alive now, but all of advancing age, with little or no transmission to the young. On the other hand, while there are 30,000 Ladin speakers left, almost all children still learn it as their mother tongue, thus Ladin is not endangered in the 21st century. UNESCO distinguishes four levels of endangerment in languages, based on intergenerational transfer:[2] Vulnerable

Extinct language An extinct language is a language that no longer has any speakers,[1] or that is no longer in current use. Extinct languages are sometimes contrasted with dead languages, which are still known and used in special contexts in written form, but not as ordinary spoken languages for everyday communication. However, language extinction and language death are often equated. Language loss[edit]

Steve Huffman Language Maps Dr. Stephen Huffman Contents Language Hotspots In the 21st century our planet’s natural resources have become endangered. It is widely accepted that the biosphere—the sum total of the planet’s flora and fauna—is in great peril of collapsing as human populations make a massive impact on the natural world. But what is not widely known is that the human cultural “biosphere” —the sum total of all human cultures living on the planet today—is in even more peril. Over half of the 7,000 languages spoken in the world today are likely to disappear this century, and with them we will lose a wealth of knowledge about human history, culture, and the natural environment. Most of what humans know about nature is encoded only in oral languages—languages that have never been written down or recorded.

The Gulf/2000 Project - SIPA - COLUMBIA UNIVERSITY Maps and Statistics Collections All maps and their accompanying texts that are hosted by this Gulf/2000 web site are original, authored and produced by Dr. Michael Izady who retains exclusive copyright to them all. They are frequently upgraded by him as well as new ones being posted.