What is Earth Overshoot Day? 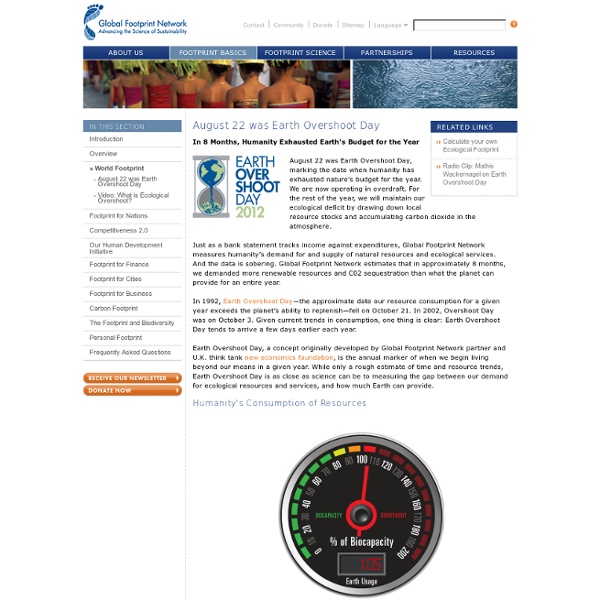 In 8 Months, Humanity Exhausts Earth's Budget for the Year August 20 is Earth Overshoot Day 2013, marking the date when humanity exhausted nature’s budget for the year. We are now operating in overdraft. For the rest of the year, we will maintain our ecological deficit by drawing down local resource stocks and accumulating carbon dioxide in the atmosphere. Just as a bank statement tracks income against expenditures, Global Footprint Network measures humanity’s demand for and supply of natural resources and ecological services. And the data is sobering. In 1993, Earth Overshoot Day—the approximate date our resource consumption for a given year exceeds the planet’s ability to replenish—fell on October 21. Earth Overshoot Day, a concept originally developed by Global Footprint Network partner and U.K. think tank new economics foundation, is the annual marker of when we begin living beyond our means in a given year. The Cost of Ecological Overspending Methodology and Projections

Related:  Things You NEED to know • The Only Earth We Have • Environmental Disaster

Big Oil’s decades of deception: Report reveals that Exxon’s known the truth about climate science since 1981 While evaluating the potential impact of developing a gas field it was interested in off Indonesia, ExxonMobil found one major reason for concern: the field in question was 70 percent carbon dioxide. If the field were developed, and that gas vented into the atmosphere, it could become the “largest point source of CO2 in the world,” accounting for a full one percent of climate change-causing emissions. According to Leonard S.

GAO: Climate change already costing US billions in losses WASHINGTON (AP) — A non-partisan federal watchdog says climate change is already costing U.S. taxpayers billions of dollars each year, with those costs expected to rise as devastating storms, floods, wildfires and droughts become more frequent in the coming decades. A Government Accountability Office report released Monday said the federal government has spent more than $350 billion over the last decade on disaster assistance programs and losses from flood and crop insurance. That tally does not include the massive toll from this year's wildfires and three major hurricanes, expected to be among the most costly in the nation's history. The Senate on Monday gave preliminary approval to a $36.5 billion hurricane relief package that would provide Puerto Rico with a much-needed infusion of cash and keep the federal flood insurance program from running out of money to pay claims from hurricanes Harvey, Irma and Maria. That's on top of another $15.3 billion aid package approved last month.

Peak Everything: Eight Things We Are Running Out Of And Why Getty ImagesWhy is everything running out at the same time? We did a series on Planet Green where we looked at why those basic things that we take for granted, like water, food and fuel are getting expensive and scarce, all at once.Peak Corn: Blame Earl Butz. Richard Nixon and Gerald Ford's Secretary of Agriculture brought in the Farm Bill that dramatically increased the amount of corn produced in America.

Americans Will Pay Billions More For Climate Change, and That’s the Best Case Photographer: The Washington Post/The Washington Post The Trump administration just published a major report documenting the advance of climate change, weeks earlier than expected and on a day many Americans are occupied with family and holiday shopping. The news is predictably bad, but this time the tally comes with a pricetag—one significantly larger than you’ll find at the mall. The report catalogs the observed damage and accelerating losses projected from a climate now unmoored from a 12,000-year period of relative stability. The result is that much of what humans have built, and many of the things they are building now, are increasingly unsuited for the world as it exists. “The assumption that current and future climate conditions will resemble the recent past is no longer valid,” the authors write.

‘The devastation of human life is in view’: what a burning world tells us about climate change I have never been an environmentalist. I don’t even think of myself as a nature person. I’ve lived my whole life in cities, enjoying gadgets built by industrial supply chains I hardly think twice about. I’ve never gone camping, not willingly anyway, and while I always thought it was basically a good idea to keep streams clean and air clear, I also accepted the proposition that there was a trade-off between economic growth and cost to nature – and figured, well, in most cases I’d go for growth. I’m not about to personally slaughter a cow to eat a hamburger, but I’m also not about to go vegan. In these ways – many of them, at least – I am like every other American who has spent their life fatally complacent, and wilfully deluded, about climate change, which is not just the biggest threat human life on the planet has ever faced, but a threat of an entirely different category and scale.

The heat is on over the climate crisis. Only radical measures will work Drowned cities; stagnant seas; intolerable heatwaves; entire nations uninhabitable… and more than 11 billion humans. A four-degree-warmer world is the stuff of nightmares and yet that’s where we’re heading in just decades. While governments mull various carbon targets aimed at keeping human-induced global heating within safe levels – including new ambitions to reach net-zero emissions by 2050 – it’s worth looking ahead pragmatically at what happens if we fail. After all, many scientists think it’s highly unlikely that we will stay below 2C (above pre-industrial levels) by the end of the century, let alone 1.5C. Most countries are not making anywhere near enough progress to meet these internationally agreed targets.

Plummeting insect numbers 'threaten collapse of nature' The world’s insects are hurtling down the path to extinction, threatening a “catastrophic collapse of nature’s ecosystems”, according to the first global scientific review. More than 40% of insect species are declining and a third are endangered, the analysis found. The rate of extinction is eight times faster than that of mammals, birds and reptiles. Yes, the Climate Crisis May Wipe out Six Billion People “Carbon emissions may continue to rise, the polar ice caps may continue to melt, crop yields may continue to decline, the world’s forests may continue to burn, coastal cities may continue to sink under rising seas and droughts may continue to wipe out fertile farmlands, but the messiahs of hope assure us that all will be right in the end. Only it won’t.” — Chris Hedges One thing the climate crisis underscores is that Homo sapiens are not primarily a rational species. When forced to make important decisions, particularly decisions affecting our economic security or socio-political status, primitive instinct and raw emotion tend to take the upper hand.

The Uninhabitable Earth: David Wallace-Wells on the horrors of climate change “It is, I promise, worse than you think.” That was was the first line of David Wallace-Wells’s horrifying 2017 essay in New York magazine about climate change. It was an attempt to paint a very real picture of our not-too-distant future, a future filled with famines, political chaos, economic collapse, fierce resource competition, and a sun that “cooks us.” Wallace-Wells has since developed his terrifying essay into an even more terrifying book, titled The Uninhabitable Earth: Life After Warming. And it is a brutal read. Wallace-Wells was criticized in 2017 for being too hyperbolic, too doom-and-gloomy.

At 4°C of warming, would a billion people survive? What scientists say. by David Spratt In a way it’s an obscene question: if the planet warms by 4 degrees Celsius (°C), would only a billion people survive and many billions perish? Obscene in the sense of the obscenity of arguing about the exact body count from a genocide. In the end it’s about the immorality, the crime, the responsibility, not the precise numbers. But it’s a relevant question, in that Earth is heading towards 4°C of warming, based on emission reduction commitments so far. The Paris commitments are a path of warming of around 3.3°C, but that does not include some carbon cycle feedbacks that have already become active (e.g. permafrost, Amazon, other declines in carbon store efficiency) which would push that warming towards 5°C.

Non-survivable humid heatwaves for over 500 million people – Climate Guide Researchers at MIT warn that if climate change remains unchecked (Business As Usual-scenario = RCP 8.5) over half a billion people will, from 2070 onwards, experience humid heat waves that will kill even healthy people in the shade within 6 hours. The Wet Bulb Temperature (WBT) would exceed 35°C (95°F), at which the body – of any mammal – cannot cool itself, overheats and shuts down. Three regions were studied: China (2018), South Asia (2017) and the Persian Gulf (2015). World's richest 10% produce half of global carbon emissions, says Oxfam The richest 10% of people produce half of Earth’s climate-harming fossil-fuel emissions, while the poorest half contribute a mere 10%, British charity Oxfam said in a report released Wednesday. Oxfam published the numbers as negotiators from 195 countries met in Paris to wrangle over a climate rescue pact. Disputes over how to share responsibility for curbing greenhouse-gas emissions and aiding climate-vulnerable countries are among the thorniest and longest-running issues in the 25-year-old UN climate process. “Rich, high emitters should be held accountable for their emissions, no matter where they live,” Oxfam climate policy head, Tim Gore, said in a statement.

African heatwaves could increase ‘five-fold’ with 3C of global warming The number of heatwaves affecting the African continent every year could be five times higher by 2050 as a result of climate change, a new study finds. Global warming of 3C above pre-industrial levels could also alter rainfall patterns across the continent, the research says, which could bring droughts to some countries and an increase in flood risk to others. However, limiting warming to 1.5C – the aspirational goal of the Paris Agreement – could greatly reduce the risk of heatwaves and other climate extremes in Africa, the lead author tells Carbon Brief. Continental countdown The new study, published in Earth’s Future, focuses on how global warming could impact a range of climate variables that tend to have a large effect on human life, including heatwaves, “hot nights” and rainfall intensity. The research finds that any degree of global warming is likely to drive an increase in the number of heatwaves and hot nights across much of Africa by 2050.

'Most Destructive Pathogen Ever' Has Created Zombie-Like Apocalypse for World's Amphibians A terrifying new study details the havoc being wrought by what scientists call "the most destructive pathogen ever" recorded on earth, finding that with help from unwitting humans a "silent killer" has caused major declines of frogs, salamanders, and hundreds of other amphibian species. Chytridiomycosis, or chytrid fungus, has killed off 90 species over the past 50 years while leading to huge losses of 501 kinds of frogs, toads, salamanders, and other amphibians, according to researchers from a number of worldwide universities. Nearly 125 of those species have declined by at least 90 percent due to the rapid spread of the pathogen. "We've known that chytrid's really bad, but we didn't know how bad it was, and it's much worse than the previous early estimates."