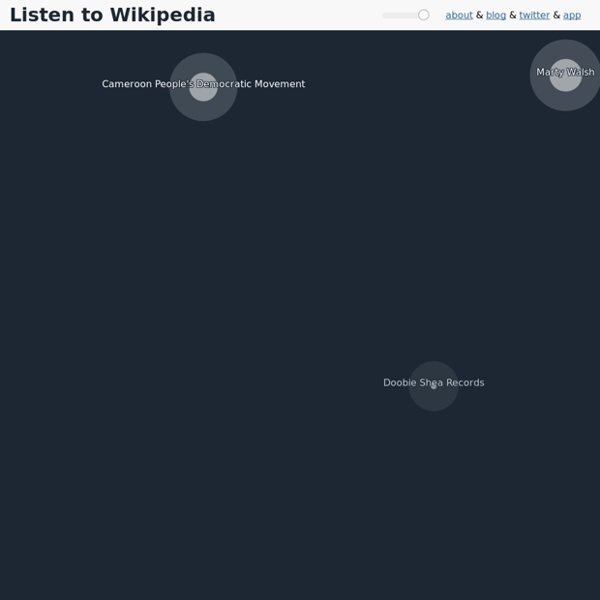 30 Beautiful Doors That Seem To Lead To Other Worlds Most doors are hopelessly mundane, but they don’t have to be; they can also serve as meaningful symbols of portals between worlds or between different aspects of our lives. When we set out to create a list of beautiful doors around the world, we were surprised to find just how many truly amazing doors there are out there that have been decorated with beautiful craftsmanship and artwork. The door is probably the single part of a building’s exterior that people will interact most frequently with, so if you want a building to look impressive up close, there’s probably no better way to do this than by having a beautiful door.

Every Noise at Once italian progressive metal deep symphonic black metal christian symphonic metal Star Wars: Episode III, redubbed using the English subtitles from a pirated Chinese edition / Boing Boing This is apparently a Chinese pirated edition of Star Wars: Episode III, but dubbed using the English subtitles offered on that disc. It's amazing, not least because the voice actors are so good I thought for a moment it might have been a TV segment with Ewan, Hayden, Samuel and co. [via] OBI WAN The front is a lemon avenue flying straightly

Braving Ebola SUAKOKO, Liberia OCT. 31, 2014 The patients arrive, at first fearful of the people in spacesuits whose faces they cannot see. They wait for test results, for the next medical rounds, for symptoms to appear or retreat. They watch for who recovers to sit in the courtyard shade and who does not. They pray. The workers offer medicine, meals, cookies and comfort. Bridges over the Chicago River GIF Bridges over the Chicago River By Slim Jones 27,671 Total Views More details Fixed iFRAME Build a Pop Song - Interactive Feature Published: June 29, 2012 The Hitmakers: Kuk Harrell Justin Bieber, Jennifer Lopez, Rihanna: they all look to Kuk Harrell to perfect the voices that have made them superstars. Figures From Famous Paintings Invade Modern Day Settings click2x The Canvas Project is a project created by Brazilian artist Gabriel Nardelli Araújo. The 28-year-old 'frees' well-known characters from classical paintings and puts them in the modern day context with the help of Photoshop. "The process is entirely digital, my works do not exist, at least so far, in physical form.

Syrian Journey: Choose your own escape route - BBC News The Syrian conflict has torn the country apart, leaving thousands dead and driving millions to flee their homes. Many seek refuge in neighbouring countries but others pay traffickers to take them to Europe - risking death, capture and deportation. If you were fleeing Syria for Europe, what choices would you make for you and your family? Electromechanical instruments + rocks: Rock Band How to make homemade slide whistles Bamboo, PVC pipe, wood, or even a carrot! Slide whistles can be made from all sorts of materials, and are fun to make, play, and learn physics with. In this episode of Homemade Science, teacher Bruce Yeany shares his ... The Glass Armonica, Benjamin Franklin’s 1761 invention The glass armonica is truly one of the strangest musical instruments in the world.

Farmers’ Market Recipe Generator 1 1/8 cups flour, more for rolling the dough Salt and pepper 1 teaspoon fresh rosemary leaves 1 stick butter 1 egg This 26-Year-Old Can Turn Any Boring Dessert Into An Adorable Miniature Scene If you were scolded at least once by your momma for playing with food, don't feel bad anymore because playing with food certainly pays off. This 26-year-old pastry chef from Italy, Matteo Stucchi, always believed that in a dessert, the decoration is as important as the taste. Following his Instagram nickname, his little creations remind the world of the famous book 'Gulliver's Travels'. Just as Gulliver encountered the tiny Lilliputians, Stucchi's tiny worlds are also filled with miniature figurines, all arranged to create these fascinating mini-scenes. Scroll down to discover them!

OTL: The Long, Strange Trip of Dock Ellis - MLB In the mid-1990s, Pierce was invited to work at an old-timers' baseball fantasy camp in Reno, Nev. Ellis was there. So was Blue, who did end up starting against Ellis in the 1971 All-Star Game. And Bobby Tolan, another former big leaguer, who had played with Ellis and Pierce on a youth squad in Los Angeles. Every day, the routine was the same: Under the blue desert sky, the old ballplayers would meet with the campers, run drills, play games.