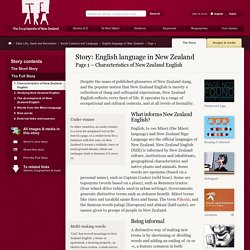 It operates in a range of occupational and cultural contexts, and at all levels of formality. Under-runner In other countries, an under-runner is a term for misplaced text at the foot of a page, or a cricket term for a batsman with few runs. Understanding New Zealand national identity – New Zealand identity. National identity is a form of social identity – meaning people’s understanding of who they are in relation to others. 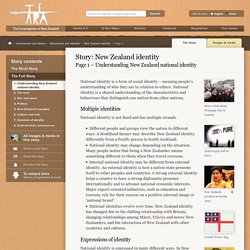 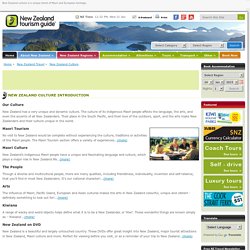 The culture of its indigenous Maori people affects the language, the arts, and even the accents of all New Zealanders. Their place in the South Pacific, and their love of the outdoors, sport, and the arts make New Zealanders and their culture unique in the world. Maori Tourism No visit to New Zealand would be complete without experiencing the culture, traditions or activities of the Maori people. What makes Aotearoa-NZ Unique in the World of Travel is Maori Culture. Ahipara Luxury Travel New Zealand. New Zealand is located in the South Pacific, three hours flight from Australia, Fiji, and the Cook Islands, ten hours from Hong Kong, thirteen hours from Los Angeles, and a good twenty hours from Europe. 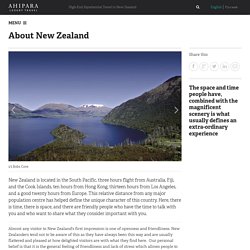 This relative distance from any major population centre has helped define the unique character of this country. Here, there is time, there is space, and there are friendly people who have the time to talk with you and who want to share what they consider important with you. New Zealand Facts and Trivia : Adventure New Zealand. General Information New Zealand's spectacularly beautiful landscape includes vast mountain chains, steaming volcanoes, sweeping coastlines, deeply indented fiords and lush rainforests. 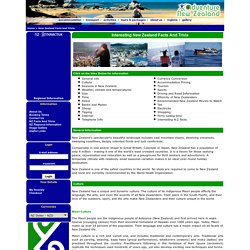 Comparable in size and/or shape to Great Britain, Colorado or Japan, New Zealand has a population of only 4 million - making it one of the world's least crowded countries. It is a haven for those seeking peace, rejuvenation and relaxation as well as a playground for thrill seekers and adventurers. A temperate climate with relatively small seasonal variation makes it an ideal year-round holiday destination. Giant rugby ball in Paris – New Zealand identity. New Zealand pavilion at Seville, 1992 – New Zealand identity. This television clip describes the way New Zealand was presented at the 1992 International Exhibition at Seville in south-east Spain. 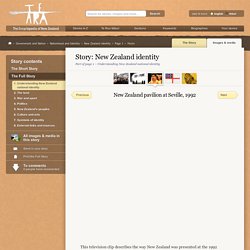 Visitors to the New Zealand pavilion were greeted outside by a Māori kapa haka group in front of a dramatic wall of rocks. They were then taken into a theatre and introduced to both the natural environment of the country and its creative culture. New Zealand Tops Our List Of The Best Countries For Business. Fun New Zealand Facts for Kids - Interesting Information about NZ. New Zealand is located in the south-western Pacific Ocean and features two main islands, the North Island and the South Island, as well as other smaller ones. 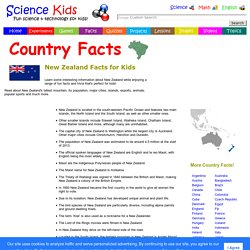 Other smaller islands include Stewart Island, Waiheke Island, Chatham Island, Great Barrier Island and more, although many are uninhabited. The capital city of New Zealand is Wellington while the largest city is Auckland. Other major cities include Christchurch, Hamilton and Dunedin. Famous New Zealanders. Image by Nicole Scheid ALL BLACKS A to Z Provides brief biographies of famous All Blacks. 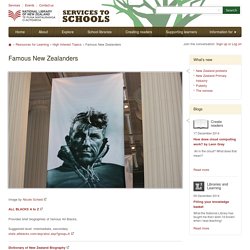 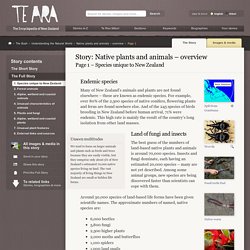 For example, over 80% of the 2,500 species of native conifers, flowering plants and ferns are found nowhere else. And of the 245 species of birds breeding in New Zealand before human arrival, 71% were endemic. This high rate is mainly the result of the country’s long isolation from other land masses. Unseen multitudes. New Zealand plants & animals. Plants. 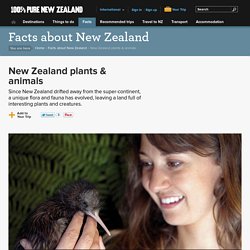 Study, Work and Live in New Zealand. New Zealand, famous for its amazing scenery, is a great country - a fun place to visit and a superb study destination. New Zealand is around the same size as Japan or Great Britain. The countryside is unique and quite spectacular, from rolling green hills to golden sand beaches then lush rainforests, all within a few hours drive. Kiwiana — quintessentially kiwi. Some things are just quintessentially Kiwi — items, objects, images and people that immediately remind us of who we are, of our essential Kiwi-ness.

This page links to items at your library and websites that will help you explore what makes New Zealanders unique. What is Kiwiana? Te Ara (the Encyclopaedia of New Zealand) defines kiwiana as The quirky things that contribute to a sense of nationhood and lists such objects as the Buzzy Bee toy, pavlovas, pāua shell ashtrays and black gumboots. The Pāua shell house In early 2007, the news that the late Fred and Myrtle Flutey’s collection of shells at their pāua shell house in Bluff might migrate from its Southern home stirred lots of interest in kiwiana. Kiwi humour The cartoon strip Footrot Flats continued the black singlet and gumboots theme as Wal, Couch, Rangi and the Dog grappled with the meaning of life in the crumbling backblocks. Billy T. Kiwiana Thematic Units, Rich Topics and Themed Learning - Pupils, teachers, inquiry, questions and projects.

Deciding what makes Kiwiana depends a lot on who you are, your background culture and other influences that you have grown up with. For something to get the name Kiwiana it may have to meet the following requirements:Be recognised as familiar to many people across New ZealandHave stood the test of time (popular over time also)Hold a special memory or positive appealIt usually reflects a value/s or ideal/s that many people holdThey are quite often unique to that community/countryHere are some items that have been called Kiwiana.. can you spot any common reasons why they might belong together in the same set/classification? What makes them different to each other? Do you notice which set has the most items of Kiwiana in it?

Why? New Zealand Icons. In this area of newzealandatoz.com we will put together New Zealand symbols that we think are icons of NZ. Our definition of an icon is something that is famous in New Zealand and should be known in the rest of the world. Some of these items you would know others you may not (but should), but if you mention any of these things to a New Zealander they will know what you are talking about, from L&P to the Black Singlet. Kiwi Fruit Buzzy Bee Black Singlet Bungy Jumping Jet Boat Edmonds Cookbook No 8 Fence Wire Paua Shell Pavlova L&P Footrot Flats The Kiwi Fruit By the mid 1890s, Edward Turner had opened a wholesale fruit business, that in 1920 became Turners and Growers, one of Edward's sons was responsible for exports of New Zealand fruits to London in 1946. The Silver fern The Silver fern has been the countries sporting emblem since 1888. Kiwiana. Image by Sandy Austin Kiwiana - Quintessentially Kiwi Christchurch City Libraries does a wonderful job of exploring our "kiwi-ness" in this guide to Kiwiana.

Looks at icons from popular culture, and our favourite people and wildlife. Suggested level: primary, intermediate, DigitalNZ From gumboots to buzzy bees to Kiwis. Suggested level: primary, intermediate, Biculturalism - Treaty Zone. Celebrating New Zealand's Waitangi Day - Tourism New Zealand Media. The national holiday was first declared in 1974, and since then has grown in significance for all New Zealanders through the Māori renaissance that has fostered better understanding of the Treaty’s ramifications. Official celebrations are held at the Waitangi Treaty Grounds in the Bay of Islands, Northland, but there are also many other events throughout the country. Traditional activities Māori cultural performances, speeches from Māori and Pakeha (European) dignitaries, and a naval salute are all part of the annual activities at Waitangi.

The Ngatokimatawhaorua, one of the world’s largest Māori ceremonial waka (war canoe), sits on the grounds at Waitangi. Kiwis celebrating Waitangi Day in London – New Zealand identity. Sheep, fern leaves and the colour black seem to be the symbols of New Zealand for these expatriates in London in the early 1990s. On the Saturday closest to Waitangi Day each year New Zealanders set out on the Circle Line pub crawl, in which they drink half a pint of beer at a pub at each of 27 stops along the underground line.

The crawl ends up at 5 p.m. at Westminster Abbey, where the Kiwis take part in a massive haka. New Kiwis celebrate Waitangi Day. For most of us, February 6 is a day to relax or enjoy music and other entertainment at public events around the country. United Tribes' flag – New Zealand identity. This flag was adopted by 25 northern chiefs and their followers in March 1834, in response to the fact that ships from New Zealand were liable to be seized unless they had a flag or certificate representing their country of origin. The adoption of the flag was the first act of Māori in claiming a collective nationhood. Until that time they had been a community of separate tribes.

Treaty FAQs - The Treaty in brief. Māori New Zealanders – The New Zealanders. Māori Language Week - Maori Language Week. What does Waitangi Day mean to you? Last updated 06:00 28/01/2014 ROBERT KITCHIN/Fairfax NZ WAITANGI DAY: The Te Tu Mataora kapa haka performance at Te Manawa in 2013. It's February 6 this Thursday and we'd like to hear what Waitangi Day means to you. What will you be doing to mark it? Immigration to New Zealand - recent and historic. Image: Polish refugee children arriving in Wellington, by John Pascoe, 1944. Alexander Turnbull Library. 1/2-003634-F.