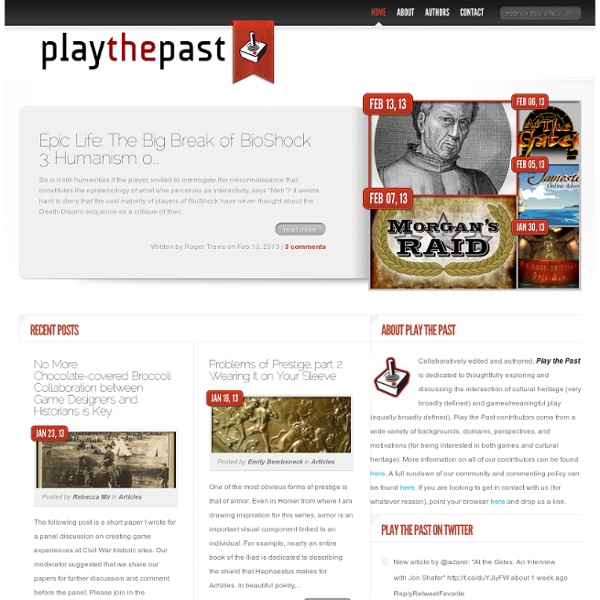 The Future of Archives in a Digital Age Scholarship and teaching in the humanities are undergoing a seismic shift, from a culture once based almost entirely on in-person and printed exchange to one reliant on a combination of traditional communications and digital technologies. It is a time of excitement for many and of skepticism for others. What does it mean that for many the most used "libraries" have become "digital"? What are the implications for the development of knowledge at a time when vast amounts of data have not been made available in digital formats? We will host, "The Future of Archives in a Digital Age," on February 24–25, 2011, with keynote addresses by Robert Darnton, Director of the University Library at Harvard, and William Ferris, former chairman of the National Endowment for the Humanities.

Were Paleolithic Cave Painters High on Psychedelic Drugs? Scientists Propose Ingenious Theory for Why They Might Have Been July 8, 2013 | Like this article? Join our email list: Stay up to date with the latest headlines via email. Prehistoric cave paintings across the continents have similar geometric patterns not because early humans were learning to draw like Paleolithic pre-schoolers, but because they were high on drugs, and their brains—like ours—have a biological predisposition to "see" certain patterns, especially during consciousness altering states. This thesis—that humanity’s earliest artists were not just reeling due to mind-altering activities, but deliberately sought those elevated states and gave greater meaning to those common visions—is the contention of a new paper by an international research team. At its core, this theory challenges the long-held notion that the earliest art and atrists were merely trying to draw the external world. “Researchers also generally claim that the geometric hallucinations experienced by the subject are mental representations of these neural patterns,” they write.

Digital History HIST3812 Games & Simulation for Historians. A Tenative Course Schedule & Outline « Electric Archaeology The aim of this course is to explore ways of expressing historical narratives through interactive digital media and simulations. This does not mean that you have to be a programmer. There are many roles that need to be filled when we enter into this realm. The final project is the creation of a detailed game/simulation design document, working in groups of five. These documents will be posted online and brought to the attention of the history & games community. The three that generate the most interest (as measured by retweets, likes, or other social media metrics) will receive an XP bonus. Anything you produce above and beyond that (like a working prototype) is also an XP bonus. XP may be earned by performing any of the tasks listed in the ‘Level Up!’ Required Text: Watrall, E. et al, Play the Past Topics: 1 – Getting started. 2- Historical Consciousness and the video game industry 4- Practical Necromancy, or Simulations: how, why, what, when. 8- ARGs, AR, and blurring the boundaries

NANO: New American Notes Online :: Home How Obama tapped into a powerful—and only recently studied—human emotion called "elevation." For researchers of emotions, creating them in the lab can be a problem. Dacher Keltner, a professor of psychology at the University of California-Berkeley, studies the emotions of uplift, and he has tried everything from showing subjects vistas of the Grand Canyon to reading them poetry—with little success. But just this week one of his postdocs came in with a great idea: Hook up the subjects, play Barack Obama's victory speech, and record as their autonomic nervous systems go into a swoon. Barack Obama In his forthcoming book, Born To Be Good (which is not a biography of Obama), Keltner writes that he believes when we experience transcendence, it stimulates our vagus nerve, causing "a feeling of spreading, liquid warmth in the chest and a lump in the throat." Elevation has always existed but has just moved out of the realm of philosophy and religion and been recognized as a distinct emotional state and a subject for psychological study.

Tooling Up for Digital Humanities Resource Center - Education - Learning: Theory and Practice - Playing and Learning Playing and Learning by Judy Diamond As a graduate student at the University of Colorado, I studied how young coyotes learn about their social and physical worlds. Coyotes are highly flexible animals, in that they adapt their learning strategies to the demands of their environment, and much of this adaptation in young coyotes is accomplished through play. Infant coyote pups play with nearly anything within reach, including their food, grass, rocks, and any movable object left in their enclosures. Later, when I started examining the behavior of family groups that visited the Lawrence Hall of Science and the Exploratorium, I found that here, too, a major component of people’s interactions with their environment involved play. The teenage Explainers working at the Exploratorium became the subjects of a study I organized that examined the long-term effects of a science museum (Diamond et al. 1987). But can significant learning be that much fun? Resources for this article Bateson, Gregory.

Welcome To CheapHostPlus, Cheap Web Hosting Solution, Hosting Server SSL Web On youth and old age, on life and death, on breathing / Aristotle WE must now treat of youth and old age and life and death. We must probably also at the same time state the causes of respiration as well, since in some cases living and the reverse depend on this. We have elsewhere given a precise account of the soul, and while it is clear that its essential reality cannot be corporeal, yet manifestly it must exist in some bodily part which must be one of those possessing control over the members. Let us for the present set aside the other divisions or faculties of the soul (whichever of the two be the correct name). But as to being what is called an animal and a living thing, we find that in all beings endowed with both characteristics (viz. being an animal and being alive) there must be a single identical part in virtue of which they live and are called animals; for an animal qua animal cannot avoid being alive. Plants are the reverse of animals in this respect. A few of the previous physical philosophers have spoken of respiration.

ProfHacker Many of us have favorite tools that suit our workflows well, helping us accomplish our tasks and keep track of needed bits of information. Below you’ll find a list of applications, services, and utilities that I use almost daily. Workflow. I know I know. Let’s backtrack a minute. A few weeks ago, coincidentally during Day of DH 2016, it was brought to my attention that Voyant, a web-based text analysis tool, had upgraded to Version 2.0. This has been a popular tool with ProfHackers (I’ve written about using it as has Brian), and the new version is a great improvement. a cleaner, crisper appearance better cross-platform and mobile device support (all tools in HTML5, no Flash or Java Applets) advanced search capabilities, including wil… My assignments are often inspired by things I learn about from my Personal Learning Network (PLN), and this particular assignment is inspired by several people. On March 30th, the American University in Cairo held its first Research Day.