Crooked Timber — Out of the crooked timber of humanity, no straight thing was ever made 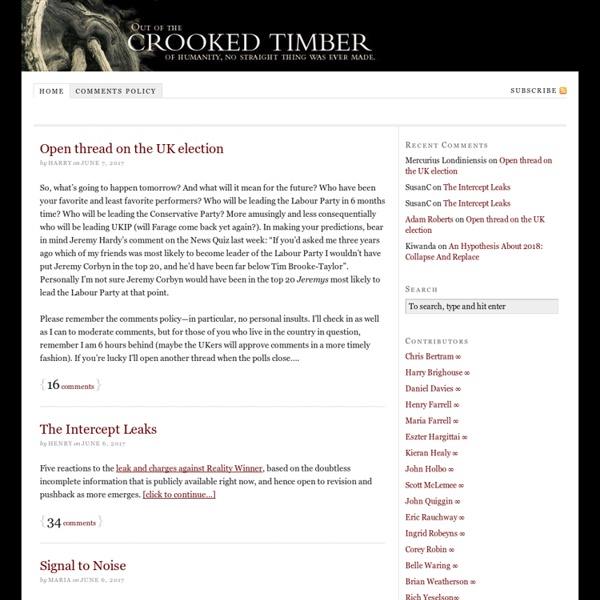 Ross Douthat is something of a punchline in these [arts . But, as I’ve argued here, he’s just about the last member of the once-numerous class of committed Republican intellectuals, all the rest having either defected to the left (Bartlett, Frum, Lind, Ornstein, Sullivan and many others) or descended into hackery (Reynolds, Brooks, the whole of the AEI/Heritage/CEI thinktank network[^1]). And, every now and then he writes something that raises important issues, at the cost of pointing up how hopeless his own program for Republican reform has become. In this piece responding to the election of Bill De Blasio, Douthat tries to make a case that the Democratic Party won’t be able to take even the minimal steps needed to address the problem growing inequality (in both outcomes and opportunity).

Censoring on one end, "outliers" on the other, what can we do with the middle? - Statistical Modeling, Causal Inference, and Social Science This post was written by Phil. A medical company is testing a cancer drug. They get a 16 genetically identical (or nearly identical) rats that all have the same kind of tumor, give 8 of them the drug and leave 8 untreated…or maybe they give them a placebo, I don’t know; is there a placebo effect in rats?. Anyway, after a while the rats are killed and examined. Nautil.us The astounding quantities of discarded plastic that end up in oceans each year tend to concentrate in ring-like swirls of currents called gyres, yet most of it can be hard to spot—not because it’s not there in great quantities, but because it often takes the form of fingernail-sized microplastics. “It looks like pristine ocean until you tow your net through the water,” researcher Erik Zettler at Sea Education Association (SEA) said about the North Atlantic Gyre. “That’s when you find the plastic.” The presence of so much plastic debris at sea poses dire threats to the marine life unlucky enough to ingest small bits of it or to become entangled in nets or plastic bags.

University of Glasgow Following the launch of the Shestov Studies Society, the first issue of the Shestov Journal came out in 1997, as a bi-lingual (English/ French) publication, that combined the informative role of a newsletter and the wider scope of a magazine devoted to the publication of new critical work as well as to the occasional re-printing of significant exegeses, or even primary texts which are long out of print. So far, five issues of the Shestov journal have been published : Issue nr. 4-5 is devoted to Shestov's previously unpublished correspondence with Martin Buber. Issue nr. 6 includes the reprint of the article 'Menacing Barbarians of Today', which initially came out in 1934 in the theosophical journal The Aryan Path, and which has never been reprinted in a volume. Issue nr. 8 is devoted to Rachel Bespaloff's work and its relationship to Lev Shestov's thought. Issue nr. 9 includes several articles and previously unpublished documents concerning Benjamin Fondane's relationship to Shestov.

521 - Cartography’s Favourite Map Monster: the Land Octopus by Frank Jacobs Over the centuries, the high seas have served as a blank canvas for cartographers’ worst nightmares. They have dotted the oceans with a whole crypto-zoo of island-sized whales, deathly seductive mermaids, giant sea serpents, and many more - a whole panoply of heraldic horrors. As varied as this marine bestiary is, mapmakers have settled on a single, favourite species for land-based beastliness: the octopus. Real octopi are sea creatures, of course.

Learning and Memory From song lyrics to former addresses, our brains hold a seemingly endless supply of information. How are we able to learn, store, and recall information with such ease? Brain cells undergo chemical and structural changes during learning. By changing the number, or strength, of connections between brain cells, information is written into memory. Lev Shestov - Dostoevsky, Tolstoy and Nietzsche - ToC THE GOOD IN THE TEACHING OF TOLSTOY AND NIETZSCHEPhilosophy and Preaching Preface Chapters 1 2 3 4 5 6 7 8 9 10 11 12 13 14 15 Translated by Bernard Martin DOSTOEVSKY AND NIETZSCHEThe Philosophy of Tragedy The Duck of Minerva Dear all, I'm currently the program chair for ISA Midwest 2014. The conference will take place from November 7th to 9th at the Hilton Ballpark in St. Louis.

300 mind expanding dokus I watch a lot of documentaries. I think they are incredible tools for learning and increasing our awareness of important issues. The power of an interesting documentary is that it can open our minds to new possibilities and deepen our understanding of the world. Contents of Classical Christian Homeschooling: Classical Education at Home Introduction to Classical Education What classical education is, and why anyone would want to return to this style of teaching and learning. Ancient Egyptian painted limestone from 1340 BC of Imeneminet and his wife, Tahka. On display with the Egyptian Antiquities Collection, Louvre Museum in Paris. Courtesy of Carol Gerten’s Fine Art Museum. On the Trivium

Reading Politics · Intervention and Prudence Patrick Porter Finally after a busy teaching term I’ve got a chance to add some thoughts to the great post and articles by Jon Western and Joshua Goldstein on humanitarian intervention. Bottom line: I think Jon and Joshua make a robust case that not only can intervention work, but that the international community is learning effectively how to go about it. Dr. Don Felix Sarda Y Salvany Liberalism is the root of heresy, the tree of evil in whose branches all the harpies of infidelity find ample shelter; it is today the evil of all evils. (Ch. 4). "The theater, literature, public and private morals are all saturated with obscenity and impurity. The result is inevitable; a corrupt generation necessarily begets a revolutionary generation. Liberalism is the program of naturalism.

Blog Roundtable: Are there tips for fighting impostor syndrome? « Mr Epidemiology This blog roundtable is part of a series about graduate school – why do it, what is it like, and what to do afterwards. I encourage you to give your own opinions in the comments section, and if you disagree with a point made by the panel, voice your opinion! This is something a lot of my readers can relate to, so I’m hoping to hear from all of you. Note that these are the opinions of those involved, and do not reflect our institutions or departments in any way. For a full list of the questions, read the first post.