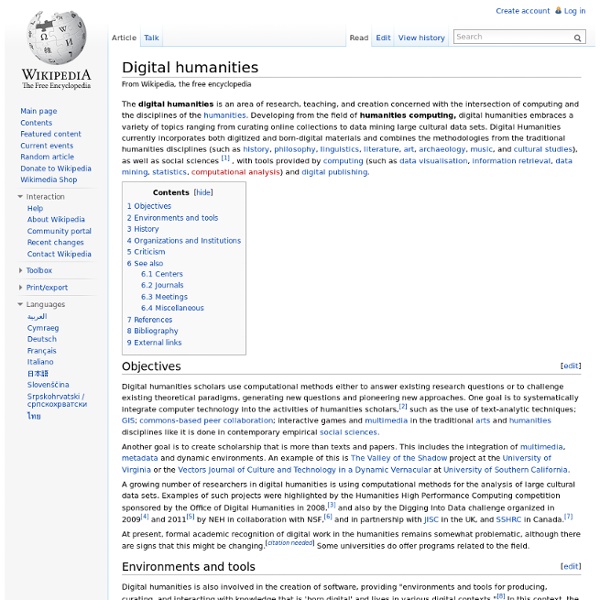 The Digital Humanities are an area of research, teaching, and creation concerned with the intersection of computing and the disciplines of the humanities. Developing from the fields of humanities computing, humanistic computing,[2] and digital humanities praxis (dh praxis[3]) digital humanities embrace a variety of topics, from curating online collections to data mining large cultural data sets. Digital humanities (often abbreviated DH) currently incorporate both digitized and born-digital materials and combine the methodologies from traditional humanities disciplines (such as history, philosophy, linguistics, literature, art, archaeology, music, and cultural studies) and social sciences [4] with tools provided by computing (such as data visualisation, information retrieval, data mining, statistics, text mining) and digital publishing. Objectives[edit] A growing number of researchers in digital humanities are using computational methods for the analysis of large cultural data sets. Related:  Saved Wiki

Digital forensics Aerial photo of FLETC, where US digital forensics standards were developed in the 1980s and '90s Digital forensics (sometimes known as digital forensic science) is a branch of forensic science encompassing the recovery and investigation of material found in digital devices, often in relation to computer crime.[1][2] The term digital forensics was originally used as a synonym for computer forensics but has expanded to cover investigation of all devices capable of storing digital data.[1] With roots in the personal computing revolution of the late 1970s and early '80s, the discipline evolved in a haphazard manner during the 1990s, and it was not until the early 21st century that national policies emerged. The technical aspect of an investigation is divided into several sub-branches, relating to the type of digital devices involved; computer forensics, network forensics, forensic data analysis and mobile device forensics. History[edit] 1980s–1990s: Growth of the field[edit] Application[edit]

Diagrammatic reasoning Diagrammatic reasoning is reasoning by means of visual representations. The study of diagrammatic reasoning is about the understanding of concepts and ideas, visualized with the use of diagrams and imagery instead of by linguistic or algebraic means. Diagram[edit] A diagram is a 2D geometric symbolic representation of information according to some visualization technique. Sometimes, the technique uses a 3D visualization which is then projected onto the 2D surface. The term diagram in common sense can have two meanings. In the specific sense diagrams and charts contrast computer graphics, technical illustrations, infographics, maps, and technical drawings, by showing "abstract rather than literal representations of information".[1] The essences of a diagram can be seen as:[1] Or as Bert S. Logical graph[edit] In the century since Peirce initiated this line of development, a variety of formal systems have branched out from what is abstractly the same formal base of graph-theoretic structures.

Unsworth: What is Humanities Computing and What is not? We are the mimics. Clouds are pedagogues. (Wallace Stevens, Notes Toward a Supreme Fiction.[1]) Any intelligent entity that wishes to reason about its world encounters an important, inescapable fact: reasoning is a process that goes on internally, while most things it wishes to reason about exist only externally.[2] Abstract I'll give the short answer to the question »what is humanities computing? First, I think the question arises because it is important to distinguish a tool from the various uses that can be made of it, if for no other reason than to evaluate the effectiveness of the tool for different purposes. So, one of the many things you can do with computers is something that I would call humanities computing, in which the computer is used as tool for modeling humanities data and our understanding of it, and that activity is entirely distinct from using the computer when it models the typewriter, or the telephone, or the phonograph, or any of the many other things it can be. I. II.

Document automation Document automation (also known as document assembly) is the design of systems and workflows that assist in the creation of electronic documents. These include logic-based systems that use segments of pre-existing text and/or data to assemble a new document. This process is increasingly used within certain industries to assemble legal documents, contracts and letters. Document automation systems can also be used to automate all conditional text, variable text, and data contained within a set of documents. Automation systems allow companies to minimize data entry, reduce the time spent proof-reading, and reduce the risks associated with human error. Additional benefits include: time and financial savings due to decreased paper handling, document loading, storage, distribution, postage/shipping, faxes, telephone, labor and waste. Document assembly[edit] Some of these documents can contain as many as 80 to 100 pages, with hundreds of optional paragraphs and data elements. In insurance[edit]

Deep linking In the context of the World Wide Web, deep linking is the use of a hyperlink that links to a specific, generally searchable or indexed, piece of web content on a website (e.g. " rather than the website's home page (e.g., " The URL contains all the information needed to point to a particular item, in this case the "Example" section of the English Wikipedia article entitled "Deep linking", as opposed to only the information needed to point to the highest-level home page of Wikipedia at Deep linking and HTTP[edit] The technology behind the World Wide Web, the Hypertext Transfer Protocol (HTTP), does not actually make any distinction between "deep" links and any other links—all links are functionally equal. Usage[edit] Deep linking and web technologies[edit] Websites built on technologies such as Adobe Flash and AJAX often do not support deep linking. Court rulings[edit] Opt out[edit] See also[edit] References[edit]

Domain-specific language The line between general-purpose languages and domain-specific languages is not always sharp, as a language may have specialized features for a particular domain but be applicable more broadly, or conversely may in principle be capable of broad application but in practice used primarily for a specific domain. For example, Perl was originally developed as a text-processing and glue language, for the same domain as AWK and shell scripts, but was mostly used as a general-purpose programming language later on. By contrast, PostScript is a Turing complete language, and in principle can be used for any task, but in practice is narrowly used as a page description language. Use[edit] The design and use of appropriate DSLs is a key part of domain engineering, by using a language suitable to the domain at hand – this may consist of using an existing DSL or GPL, or developing a new DSL. Overview[edit] In design and implementation[edit] Programming tools[edit] Domain-specific language topics[edit]

Drama Artwork intended for performance, formal type of literature Mime is a form of drama where the action of a story is told only through the movement of the body. Drama can be combined with music: the dramatic text in opera is generally sung throughout; as for in some ballets dance "expresses or imitates emotion, character, and narrative action".[6] Musicals include both spoken dialogue and songs; and some forms of drama have incidental music or musical accompaniment underscoring the dialogue (melodrama and Japanese Nō, for example).[7] Closet drama is a form that is intended to be read, rather than performed.[8] In improvisation, the drama does not pre-exist the moment of performance; performers devise a dramatic script spontaneously before an audience.[9] History of Western drama[edit] Classical Greek drama[edit] Classical Roman drama[edit] An ivory statuette of a Roman actor of tragedy, 1st century CE. Medieval[edit] Elizabethan and Jacobean[edit] English Restoration comedy[edit] Opera[edit]

Data re-identification More and more data are becoming publicly available over the Internet. These data are released after applying some anonymization techniques like removing personally identifiable information (PII) such as names, addresses and social security numbers to ensure the sources' privacy. This assurance of privacy allows the government to legally share limited data sets with third parties without requiring written permission. Such data has proved to be very valuable for researchers, particularly in health care. Legal protections of data in the United States[edit] Existing privacy regulations typically protect information that has been modified, so that the data is deemed anonymized, or de-identified. Educational records[edit] In terms of university records, authorities both on the state and federal level have shown an awareness about issues of privacy in education and a distaste for institutions' disclosure of information. Medical records[edit] Biospecimen[edit] Re-identification efforts[edit]

Database journalism Database journalism or structured journalism is a principle in information management whereby news content is organized around structured pieces of data, as opposed to news stories. See also Datajournalism Communication scholar Wiebke Loosen defines database journalism as "supplying databases with raw material - articles, photos and other content - by using medium-agnostic publishing systems and then making it available for different devices. History and development of database journalism[edit] 2007 saw a rapid development in database journalism.[4] A December 2007 investigation by The Washington Post (Fixing DC's schools) aggregated dozens of items about more than 135 schools in a database that distributed content on a map, on individual webpages or within articles. The importance of database journalism was highlighted when the Knight Foundation awarded $1,100,000 to Adrian Holovaty's EveryBlock project,[5] which offers local news at the level of city block, drawing from existing data.