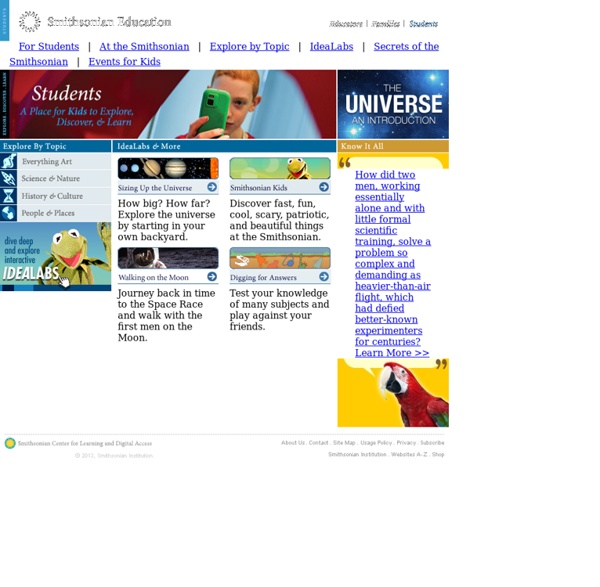 Lawrence Hall of Science - 24/7 Science How fast does the wind blow? What makes things sticky? Where do insects live and plants grow? What is the best way to clean up the environment? How do humans measure up in the animal kingdom? Rumsey Historical Map Collection The David Rumsey Map Collection was started over 25 years ago and contains more than 150,000 maps. The collection focuses on rare 18th and 19th century maps of North and South America, although it also has maps of the World, Asia, Africa, Europe, and Oceania. The collection includes atlases, wall maps, globes, school geographies, pocket maps, books of exploration, maritime charts, and a variety of cartographic materials including pocket, wall, children's, and manuscript maps. Items range in date from about 1700 to 1950s. Digitization of the collection began in 1996 and there are now over 55,000 items online, with new additions added regularly. The site is free and open to the public.

7 Secrets of the Super Organized A few years ago, my life was a mess. So was my house, my desk, my mind. Then I learned, one by one, a few habits that got me completely organized. Am I perfect? Of course not, and I don’t aim to be. Molecular Workbench Three Views of MW Senior Scientist and Molecular Workbench Developer Charles Xie, Researcher and Manager Amy Pallant, and Technology and Curriculum Developer Dan Damelin describe the history of Molecular Workbench and our vision for the future. Watch the Video undefinedundefinedundefined Education Technology - theory and practice: Pearltrees for teachers Year 2012 last post is a guest post from Finnish teacher Tommi Viljakainen. He is a teacher in Elimäki lower and upper secondary school. He teaches English, French and P.E.

Frostbite Theater Welcome to Frostbite Theater, a collection of science videos produced by Jefferson Lab! Liquid Nitrogen Experiments Have you ever wanted to play with liquid nitrogen, but didn't happen to have any lying around the house? Blog Archive » The Web’s third frontier Everyone realizes that the web is entering a new phase in its development. One indication of this transition is the proliferation of attempts to explain the changes that are occurring. Functional explanations emphasize the real time web, collaborative systems and location-based services. The Franklin Institute's Resources for Science Learning This presentation of The Franklin Institute's Case Files highlights individuals from the history of science and technology. It is one of many Resources for Science Learning. Each thematic group of Files presented at left begins with commentary from a distinguished historian of the discipline.