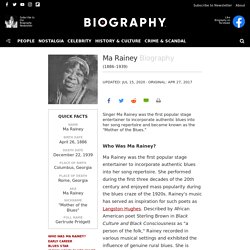 " Who Was Ma Rainey? Ma Rainey was the first popular stage entertainer to incorporate authentic blues into her song repertoire. She performed during the first three decades of the 20th century and enjoyed mass popularity during the blues craze of the 1920s. Rainey's music has served as inspiration for such poets as Langston Hughes. Described by African American poet Sterling Brown in Black Culture and Black Consciousness as "a person of the folk," Rainey recorded in various musical settings and exhibited the influence of genuine rural blues. Early Career. Overlooked No More: Ma Rainey, the ‘Mother of the Blues’

In the process, Rainey helped to mainstream narratives of black female autonomy that had little to do with the Victorian norms of white society. 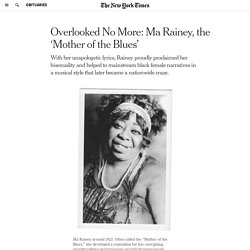 Partly that meant speaking candidly about her attraction to women as well as men. In “Prove It on Me Blues,” accompanied by a jug band, she sings defiantly: Went out last night with a crowd of my friends.They must’ve been women, ‘cause I don’t like no men.It’s true I wear a collar and a tie,Makes the wind blow all the while.Don’t you say I do it, ain’t nobody caught me.You sure got to prove it on me. A Georgia native, Rainey began her career on the tent-show circuit, traveling with performance troupes that set up their own stages in towns across the South and Midwest, honing her own gregarious brew of music, comedy and social commentary. The characters in Rainey’s songs rarely allowed themselves to become dependent on a male partner, or any agent of the law. Lizzie Miles, Tin Angel ad. The History of Minstrelsy : Blind Tom · USF Library Special & Digital Collections Exhibits. Blind Tom. 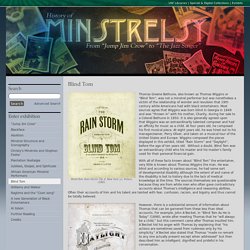 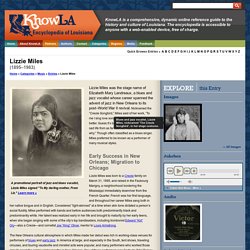 Lavinia Turner. Vep.cs.wisc. The following links will allow users to play with live, running versions of three sample models that we have built and are hosting on our own server. 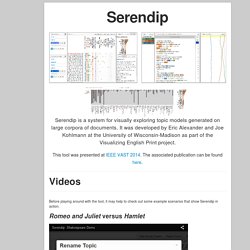 These models are also included with the Serendip installation (which will likely yield better performance). Note: our server might have trouble with heavy traffic--best performance is achieved through downloading the tool and running it locally. Shakespeare_50 This model of 50 topics was built on a corpus of the 36 plays of William Shakespeare. The documents were divided into chunks of 1000 words for the model, and then stitched back together to create full documents. Shakespeare_25 This model of 25 topics was also built on the works of William Shakespeare. Voyant Tools. A Blues Bibliography - Robert Ford. Jazz report. Down beat. Where Things Are - Finding Music Resources - Library Research Guides at Indiana University. ​First Floor: Call numbers A–LX, M1–244; Reference Collection; current journals Second Floor: Call numbers M245– ; miniature scores Third Floor: ML (including bound journals); MT; MZ (IU dissertations); Call numbers N-Z; oversize items Reference Collection: All items in the Reference Collection are on the first floor, regardless of call number; they cannot be checked out. 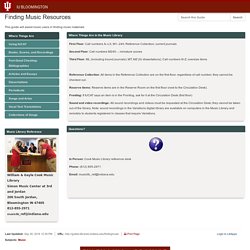 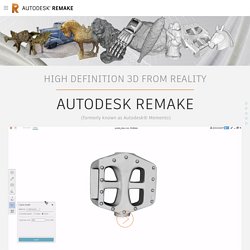 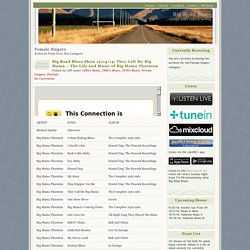 The label was originally called Queen Vee Records, changing the name to Spivey records the following year. I believe only a couple of 45's were issued under the Queen Vee imprint. Spivey Records released a series of blues and jazz albums between 1961 and 1985. Ora Alexander - "You've Got To Save That Thing" Ora Alexander was a blues singer and Vaudeville performer who recorded for Columbia Records in the early 1930’s. 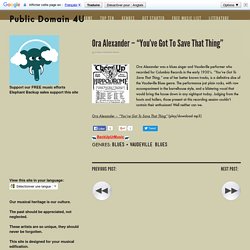 “You’ve Got To Save That Thing,” one of her better known tracks, is a definitive slice of the Vaudeville Blues genre. The performance just plain rocks, with raw accompaniment in the barrelhouse style, and a blistering vocal that would bring the house down in any nightspot today. Judging from the hoots and hollers, those present at this recording session couldn’t contain their enthusiasm! Syllabus. Digital Humanities ILS 657 Fall 2016 Instructor: Dr. 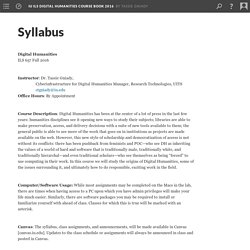 Tassie Gniady, Cyberinfrastructure for Digital Humanities Manager, Research Technologies, UITS ctgniady@iu.eduOffice Hours: By Appointment Course Description: Digital Humanities has been at the center of a lot of press in the last few years: humanities disciplines see it opening new ways to study their subjects; libraries are able to make preservation, access, and delivery decisions with a suite of new tools available to them; the general public is able to see more of the work that goes on in institutions as projects are made available on the web. Alliance for Networking Visual Culture. 2013 Alan Liu, “From Reading to Social Computing” 2013 Alan Liu, “From Reading to Social Computing” From Reading to Social Computing Alan Liu ¶ 1 My topic here is social computing, which gives literary studies a chance to think anew about such apparently axiomatic literary phenomena as writing, publishing, reading, and interpreting.

Or, rather, anew is the wrong word. External?link= Adventures in Digital Cultural Heritage.