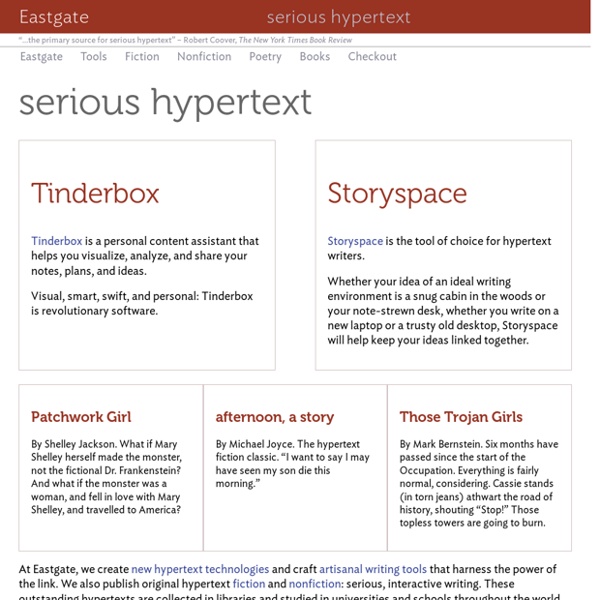 Tinderbox is a personal content assistant that helps you visualize, analyze, and share your notes, plans, and ideas. Visual, smart, swift, and personal: Tinderbox is revolutionary new software. Shelley Jackson's brilliant, unforgettable hypertext novel Patchwork Girl is one of the great achievements of literary hypertext. What if Mary Shelley herself made the monster, not the fictional Dr. Frankenstein? And what if the monster was a woman, and fell in love with Mary Shelley, and travelled to America?

Why No One Clicked on the Great Hypertext Story 2. A few adventurous fiction writers had tried to build branching-path narratives in print form, most famously Julio Cortázar in his book Hopscotch. But “Afternoon, a Story” was the first to take this approach in digital form. Each reading of the story could follow a different combination of nodes; “closure,” in this new form, was as obsolete as the printed page. “When the story no longer progresses, or when it cycles, or when you tire of the paths,” Joyce wrote in the introduction, “the experience of reading it ends.” By the early ’90s, Joyce and his hypertextual coconspirators had triggered a larger public conversation about the significance of this new form. CMC Magazine: Cyberspace Couples Finding Romance Online Then Meeting for the First Time in Real Life by Andrea Baker Introduction to Purpose and Methodology This study is an attempt to start mapping the features and processes of online relationships leading to intimate relationships. The eighteen couples who provide the data here all met first online and then offline between 1993 and 1997. They met by corresponding in writing and developed their acquaintance into friendship, dating partners and then, for some cohabitation or marriage.

How Machines Write Poetry As a teenager in Vermont, Sarah Harmon used Java to create a computer program that wrote poetry. She named it OGDEN. Then she submitted one of its poems in 2008 to her high-school literary magazine under the pen name Dan Goshen, an anagram of Ogden Nash. Examples of hypertext fiction – how to write hypertext narratives? - The Chron-nicoles Looking at examples of hypertext books there are only a handful that have been critically examined. Paul Hackman notes, “fifteen years after the first generation of hypertext novels emerged, hypertext literature remains on the fringe of literary studies” (2011, p. 86). One of the reasons for the lack of hypertext fiction novels, besides the issues with remediation and the phenomenological experience are the technical limitations.

A Declaration of the Independence of Cyberspace by John Perry Barlow <barlow@eff.org> Governments of the Industrial World, you weary giants of flesh and steel, I come from Cyberspace, the new home of Mind. On behalf of the future, I ask you of the past to leave us alone. You are not welcome among us. You have no sovereignty where we gather. We have no elected government, nor are we likely to have one, so I address you with no greater authority than that with which liberty itself always speaks.

How to make a Twitter Bot with Google Spreadsheets (version 0.4) – Zach Whalen Do you like Twitter bots? I know I sure do. I like following them, and I like making them. I also like introducing my students to bots as one way to do creative things in a networked digital context. That’s way, back in 2013, I cobbled together a simple tool built on a Google Spreadsheets that lets anyone create a simple bot without having to write any code. There are many other ways to make a Twitter Bot, but I like this approach for its clarity and hopefully its accessibility for non-programmers to start understanding how to think about language through programming.