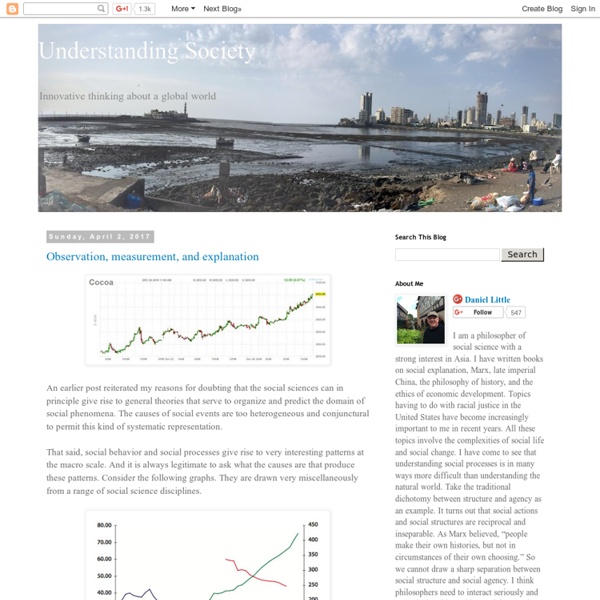 It seems that there is a lot happening in metaphysics these days. There is of course the return to Aristotle that has occurred within the resurgent field of powers ontology in the theory of causation (e.g. Ruth Groff, Ontology Revisited: Metaphysics in Social and Political Philosophy, Stephen Mumford and Rani Lill Anjum, Getting Causes from Powers). But volumes like David Oderberg's Classifying Reality and Real Essentialism make it clear that the trend is broader than this. And here too, Aristotle is making a come-back. The fundamental question for metaphysics is this: what exists in the world in which we live?

Internet History Sourcebooks Project Internet History Sourcebooks Project Paul Halsall, Editor Last Modified: Dec 11 | linked pages may have been updated more recently The Internet History Sourcebooks Project is a collection of public domain and copy-permitted historical texts presented cleanly (without advertising or excessive layout) for educational use. Everyday Sociology Blog By Karen Sternheimer As a self-starter, I like self-help books, and have read or listened to number of audio books in the genre. I have listened to many books on discovering one’s passions and creativity, on personal finance, relationships, career building, and those promoting emotional well-being. I can truly say that I have learned a lot from them, and they have taught me how to understand myself and others better. But even while listening, on occasion I am reminded of the limits of self-help books. For instance, many personal finance books suggest that readers control their spending—stop buying that daily latte, and eventually you will have a million dollars.

Positive and Negative Networks: Lessons from Ecology? « Permutations Let me pose a puzzle. Mathematical sociologists like puzzles! Jordi Bascompte recently published an article in Science (vol. 329, 13 August, 2010, p. 765-6) titled “Structure and Dynamics of Ecological Networks.” The piece is in the “Perspectives” section — which are commentaries and explanations of the “real” articles (which are often a bit too discipline-specific to be accessible to the average reader). ThickCulture The following is a guest post by Concordia College sociology major Ryan Larson ’14. After graduation, Ryan intends to pursue graduate study in sociology and criminology. He is also a huge hockey fan. Hockey is back at the forefront of the national sports consciousness thanks to T.J.

Neighbourhoods The other day I was contacted by a TV production company seeking my help in recruiting children and young people for a documentary programme about their experience of poverty. Obviously contacts like these are now subtly different, post-Benefits street: but in what way? Would another production company dare to treat people who experience exclusion in the way the producers of Benefits street did?

University of Glasgow Following the launch of the Shestov Studies Society, the first issue of the Shestov Journal came out in 1997, as a bi-lingual (English/ French) publication, that combined the informative role of a newsletter and the wider scope of a magazine devoted to the publication of new critical work as well as to the occasional re-printing of significant exegeses, or even primary texts which are long out of print. So far, five issues of the Shestov journal have been published : Issue nr. 4-5 is devoted to Shestov's previously unpublished correspondence with Martin Buber. Social Science Statistics Blog 28 April 2013 App Stats: Roberts, Stewart, and Tingley on "Topic models for open ended survey responses with applications to experiments" We hope you can join us this Wednesday, May 1, 2013 for the Applied Statistics Workshop. Molly Roberts, Brandon Stewart, and Dustin Tingley, all from the Department of Government at Harvard University, will give a presentation entitled "Topic models for open ended survey responses with applications to experiments". A light lunch will be served at 12 pm and the talk will begin at 12.15.

2010 September April 3, 2014 Disturbed Elephants Evidence that elephants can be haunted by traumatic experiences for decades puts a darker spin on the old adage, "An elephant never forgets." April 4, 2014 Sleeping In Space racismreview.com The Top Ten Percent policy is one of the key issues in the case filed by Abigail Fisher against the University of Texas now before the Supreme Court. Fisher alleges that her rejection from the University of Texas was based on discrimination due to her race (white). One of Fisher’s principal arguments is that the Top Ten Percent Rule has produced sufficient levels of diversity, i.e., that it already increases minority enrollment.