FA: Is It Evidence? 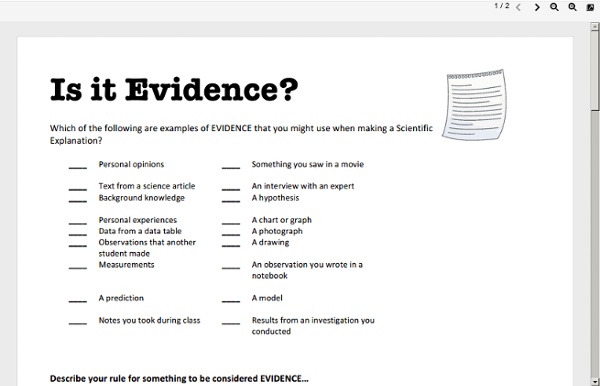 Explanations: C.E.R. Prezi Scientific Writing Scaffolds As a department we've been working on different writing scaffolds. We use Constructing Meaning as a school which I think is mostly good. We've tried all kinds of different writing frames with varying degrees of success. Most of these come from Constructing Meaning. I'm going to take you in chronological order. Designing Science Inquiry: Claim + Evidence + Reasoning = Explanation In an interview with students, MIT's Kerry Emmanuel stated, "At the end of the day, it's just raw curiosity. I think almost everybody that gets seriously into science is driven by curiosity." Curiosity -- the desire to explain how the world works -- drives the questions we ask and the investigations we conduct. Let's say that we are planning a unit on matter. By having students observe solids and liquids, we have helped them define matter as something that has mass (or weight -- don’t worry about the difference with elementary kids!)

Claim Evidence Reasoning By far, the biggest shift in my teaching from year 1 to year 7 has been how much emphasis I now place on evaluating evidence and making evidence-based claims. I blame inquiry. Not inquiry in the generalized, overloaded, science teaching approach sense. Does Knuckle Cracking Lead to Arthritis? 3 CER Examples based on FUN Science! CER is an awesome format to teach science students, but CER examples are lacking. CER stands for Claim, Evidence, and Reasoning. It is a great format for writing explanations is it serves to tie together findings, data, and scientific principles. I am beginning to use CER with my classes and I love it.

Why Does the Water Rise? This experiment requires the use of matches... and that means adult supervision. Fill a plastic cup up with water. About 9 oz. should do the trick. Add 2 or 3 drops of food coloring to the water. Claim, Evidence, Reasoning: Tools to Introduce CER in PD and Instruction I have been digging into Joseph Krajcik and Katherine McNeill’s book- Supporting Grade 5-8 Students in Constructing Explanations in Science- and I highly recommend it to any upper elementary and middle school teacher of science. The book provides a very clear and engaging look at how to use a Claim, Evidence, Reasoning (CER) framework to improve student writing and discourse in science. The CER framework can support not only science explanations but also the Common Core State Standards’ focus on using evidence and argumentation in math and English/Language Arts. As I’ve been moving through the book, I’ve developed some tools that could be useful for professional development providers, professional learning communities, and ultimately students who are engaging with a CER framework.