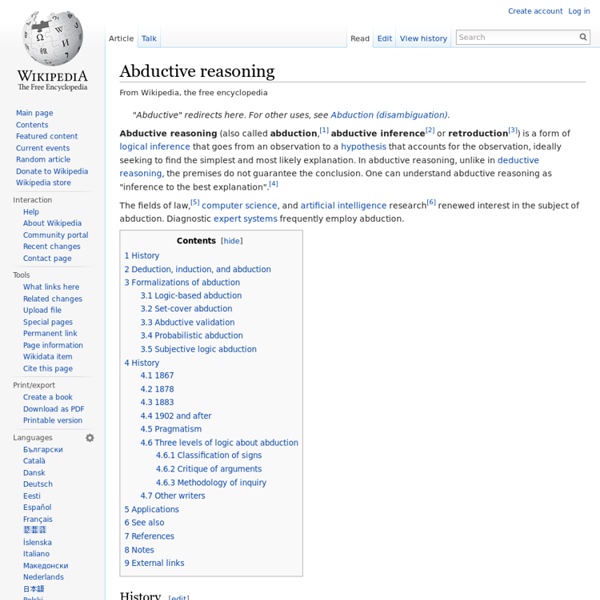 Abductive reasoning (also called abduction,[1] abductive inference[2] or retroduction[3]) is a form of logical inference that goes from an observation to a hypothesis that accounts for the observation, ideally seeking to find the simplest and most likely explanation. In abductive reasoning, unlike in deductive reasoning, the premises do not guarantee the conclusion. One can understand abductive reasoning as "inference to the best explanation".[4] The fields of law,[5] computer science, and artificial intelligence research[6] renewed interest in the subject of abduction. Diagnostic expert systems frequently employ abduction. History[edit] The American philosopher Charles Sanders Peirce (1839–1914) first introduced the term as "guessing".[7] Peirce said that to abduce a hypothetical explanation from an observed circumstance is to surmise that may be true because then would be a matter of course.[8] Thus, to abduce from involves determining that is sufficient, but not necessary, for allows deriving

Reason Psychologists and cognitive scientists have attempted to study and explain how people reason, e.g. which cognitive and neural processes are engaged, and how cultural factors affect the inferences that people draw. The field of automated reasoning studies how reasoning may or may not be modeled computationally. Animal psychology considers the question of whether animals other than humans can reason. Etymology and related words[edit] In the English language and other modern European languages, "reason", and related words, represent words which have always been used to translate Latin and classical Greek terms in the sense of their philosophical usage. The original Greek term was "λόγος" logos, the root of the modern English word "logic" but also a word which could mean for example "speech" or "explanation" or an "account" (of money handled).[7]As a philosophical term logos was translated in its non-linguistic senses in Latin as ratio. Philosophical history[edit] Classical philosophy[edit]

Trying to get my head around "design thinking" I have to admit that I’ve been steering clear of talking about “design thinking” for a while now. A couple years back, when I first heard about what sounded like an exciting new angle on design strategy, I eagerly scoured the web to figure out what it was all about. At Cooper, we’ve always concerned ourselves with challenges beyond skin-deep ornamentation, and we particularly relish working for clients who value the insights that we can bring to their strategic business decisions. I’m interested in anything that gives us leverage to help businesses get beyond the assumptions that stand in the way of truly serving human needs. So when I set off to learn more, I was a bit disappointed to discover that all the information I could find about “design thinking” appeared to prominently feature the Keeley triangle, some business success stories and not a lot more. The Keeley Triangle. To be clear, I have no argument with the Keeley triangle.

The Eight Pillars of Innovation The greatest innovations are the ones we take for granted, like light bulbs, refrigeration and penicillin. But in a world where the miraculous very quickly becomes common-place, how can a company, especially one as big as Google, maintain a spirit of innovation year after year? Nurturing a culture that allows for innovation is the key. At that time I was Head of Marketing (a group of one), and over the past decade I’ve been lucky enough to work on a wide range of products. What’s different is that, even as we dream up what’s next, we face the classic innovator’s dilemma: should we invest in brand new products, or should we improve existing ones? "As we’ve grown to over 26,000 employees in more than 60 offices, we’ve worked hard to maintain the unique spirit that characterized Google way back when I joined as employee #16." Have a mission that matters Work can be more than a job when it stands for something you care about. Think big but start small The best part of working on the web?

Project Re: Brief Case Study The core challenge for Fi was to plan, design and develop an interactive experience that smoothly delivered a wide array of content across four clearly branded sections. Four complex sets of branded content, a feature-length documentary, and the requisite global navigation elements combined to present a unique challenge for our UX & Design teams. How do you craft a digital experience that delivers all the wonder and beauty of a disparate array of creative content without crowding the interface or confusing the user? Creative fuel

Inference Inference is the act or process of deriving logical conclusions from premises known or assumed to be true.[1] The conclusion drawn is also called an idiomatic. The laws of valid inference are studied in the field of logic. Alternatively, inference may be defined as the non-logical, but rational means, through observation of patterns of facts, to indirectly see new meanings and contexts for understanding. Human inference (i.e. how humans draw conclusions) is traditionally studied within the field of cognitive psychology; artificial intelligence researchers develop automated inference systems to emulate human inference. Statistical inference uses mathematics to draw conclusions in the presence of uncertainty. Examples[edit] Greek philosophers defined a number of syllogisms, correct three part inferences, that can be used as building blocks for more complex reasoning. All men are mortalSocrates is a manTherefore, Socrates is mortal. Now we turn to an invalid form. All apples are fruit. ? ? P.